Despite a bit of a sell-off on Friday, January 3rd, grain markets are starting 2020 strong, as trade deals buzz and strong export activity are fueling higher prices in a shortened trading week. Also weighing on the markets is the boatload of data that the United States Department of Agriculture (USDA) is going to release next Friday, including the normal WASDE report, quarterly grain stocks, and finally, winter wheat seeded acres.

While prices performed generally positive for the month of December, the highs seen at the end of September nullified some of the gains from a quarterly performance perspective. This is especially pronounced in the wheat complex, which saw a bit of a rally right before and during the holidays. Digging in, winter wheat acres found more of a gain than Minneapolis HRS wheat did, but that’s mainly because of concerns of what the 2020 U.S. crop is looking like.

Corn prices are seemingly following wheat right now as it looks for fresh headlines on either the export and ethanol side of things. That said, as a sign of the tough margin times in the ethanol market, Bunge announced this week that it was selling off a bit of a stake in its ethanol business line.

On the export front, U.S. corn shipments are more than half of what they were at this point a year ago, with less than 7.93 MMT shipped through Week 16 of its crop year.

One could argue that this is a function of stronger competition from South America, but also, more relaxed trade around the world. Specific to South America, while there are some dryness concerns in northern Brazil, there’s no real weather concerns that the market is pricing in. That said, the first soybeans are starting to come off in Mato Grosso, Brazil, and I’ve said before, any further trade talks between China and the U.S. could be impacted by how the Brazilian harvest is looking. U.S. soybean exports continue to perform well, with 19.8 MMT sailed through Week 16. That’s up nearly 25% compared to a year ago, albeit it is still about 25% behind the 5-year average for the time of year.

With that in mind, this week, China did ease some customs regulations on soybeans coming in through their northern border crossings. This is certainly something to keep an eye on, as it somewhat suggests that there could be more business coming in from the Black Sea, namely Russia, Kazakhstan, and bit from Ukraine. Granted, it’s a long distance for those beans to go, there is now a railroad connecting Russia to China, making it a bit easier for the grain to travel. 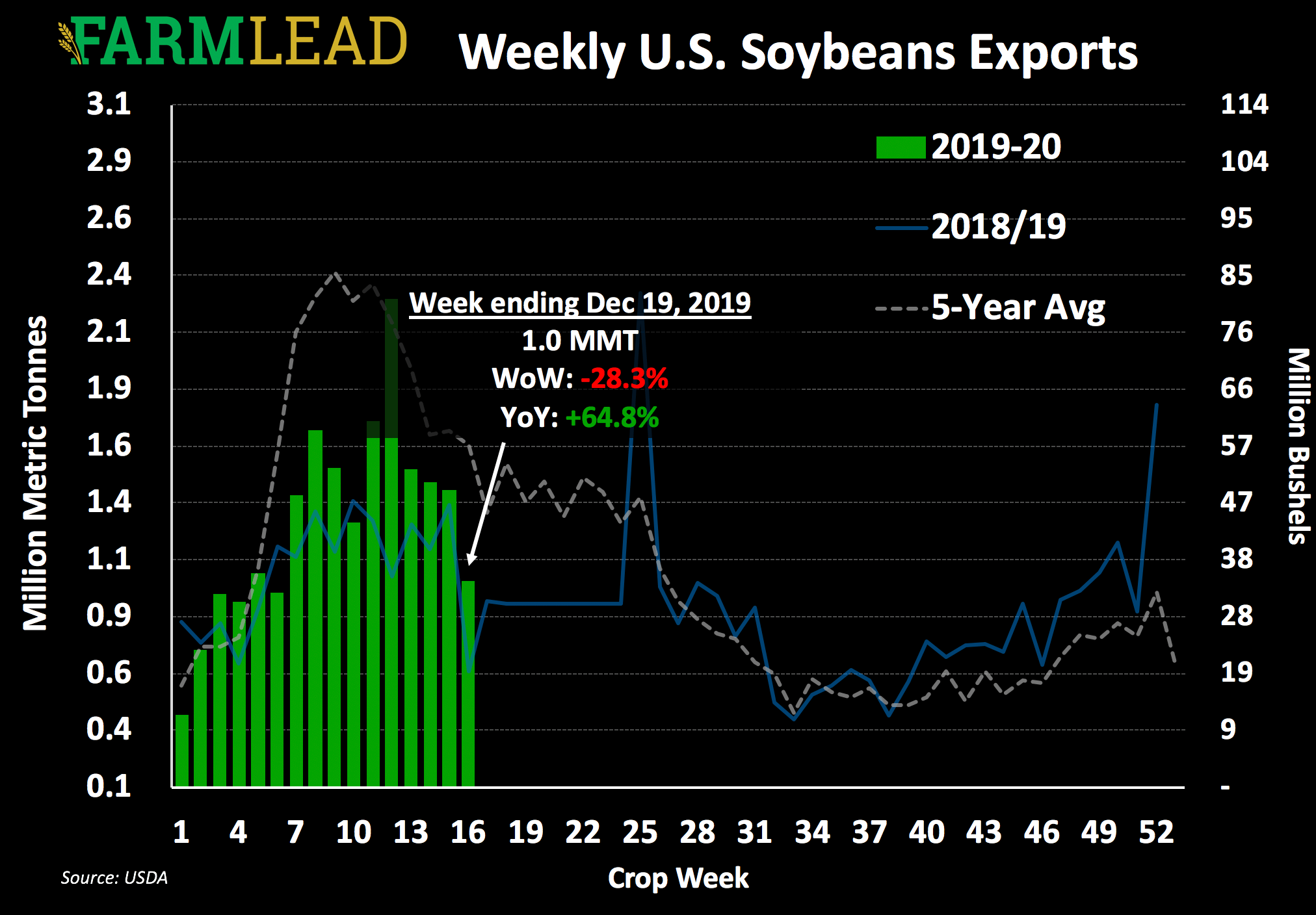 Looking at canola, there’s a lot of frustrated voices out there, given the decent demand, smaller harvest, and the fact that there’s still a lot of 2019 crop that’s unharvested. When we think about what dictates the price of canola though, you have to understand that the market is already accounting for those unharvested acres (in the mindset of they will be harvested eventually), but also how much supply is still in the pipeline. In my last column for the Christmas holidays, I made this same point and it’s worth reiterating.

That said, canola prices did find some significant gains the last few days and on a quarterly perspective. Those 2020 contracts are looking pretty decent, considering that there’s supposed to be a 3.5 MMT carryover from 2019 crop into the 2020/21 growing season. Further, rapeseed prices on the European futures board in Paris found its highest levels for this time of year since 2013. Most analysts agree that this isn’t a supply or demand-generated rally, but rather, a function of spillover from increasing prices of palm oil and soy oil.

Finally, the Phase One trade war deal is expected to be signed by the Chinese and American presidents in the White House on January 15th. While this news – namely the $40 Billion USD in additional U.S. agricultural purchases by China – has already been priced in, there are more than a few out there you will finally believe the deal when pen is put to paper.

Somewhat complicating the signing of the deal continues to be impeachment proceedings for President Trump (although it’s unlikely he’ll be removed from power by the Senate), as well as the recent military action by the U.S. against a former Iranian military commander.

In next week’s column we’ll peer into the crystal ball a bit more and talk about what I’m expecting for grain markets through the 2020 calendar year.