Alberta’s Ministry of Agriculture and Forestry has come out with its grasshopper outlook for the upcoming farming season, and indications are that populations could put serious pressure on growing crops.

The 2020 grasshopper forecast map is based on adult grasshopper counts conducted in early August 2019 by participating agriculture fieldmen across the province.

This year’s map has indications of moderate to high levels of grasshoppers throughout most of the Peace River region and northern portions of central Alberta. For the northern regions, the most common species indicted is the Melanoplus bruneri, which had low numbers in 2018 but higher for last year. The M. brineri species wasn’t considered a pest until recently, and has been documented to have a biennial lifecycle. The biennial lifecycle has a profound impact on grasshopper forecasts, the government says.

When it comes to southern Alberta, the map shows a growing grasshopper population. Consecutive dry summers are one of the biggest factors when it comes to the uptick for the pest. According to a news release, this is especially true in the M.D. of Acadia, Vulcan, Willow Creek, Lethbridge, Cardston, Magrath and Forty Mile.

The grasshopper species found in southern Alberta are a blend of Melanoplus bivitattus, M. packardi, M. sanguinipes and Camnula pellucida.

The rest of the province shows light to low grasshopper populations. For the past two years the ministry has offered a modified sampling protocol along with providing training which has not only reduced the workload for AAF fieldman, it has also increased the accuracy of the forecast. 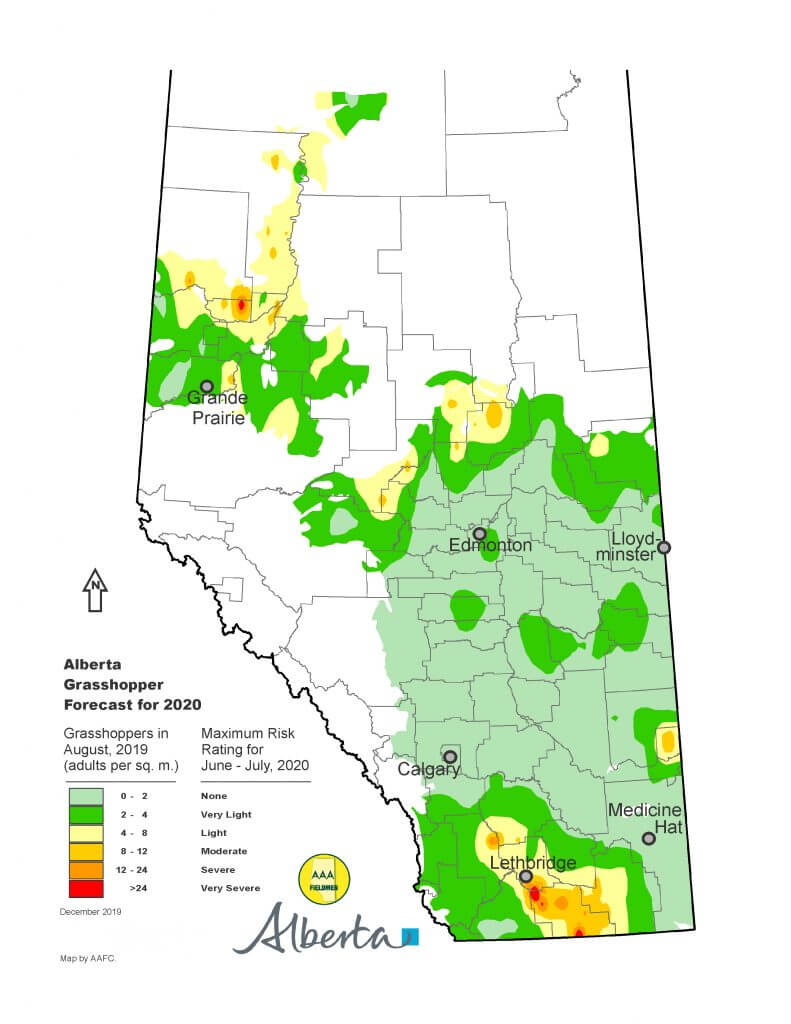 Adult grasshopper counts give an indication of the number of hoppers that are capable of reproduction and egg laying. Environmental factors can also result in higher or lower actual populations than forecast.

The ministry points out producers need to be aware of the potential risks in their area, monitor fields accordingly, and then make the appropriate decisions if control measures are required.

Economic thresholds an be found by clicking here.