Grain markets ended the first full week of trading in 2020 mostly higher as the complex ignored some of the bearish data that the USDA presented in their monthly data dump, and instead, focused on the trade war deal expected to be signed by China and the U.S. next week. The main reason grain markets closed higher on Friday is because the USDA did not include any forecasted expectations from the trade deal getting signed, hence why the market remained bullish, despite some bearish numbers.

Going into the January WASDE report, analysts were mostly bullish to begin with, expecting U.S. corn and soybean yields, harvested, acres, and ultimately production to all be lower.

That didn’t happen though (except for harvested acres that is). The USDA instead raised corn yields from their December estimate of 167 bushels per acre (bpa) to 168 bpa this month, despite the average pre-report expecting to see 166.2. Similarly, average American soybean yields were increased by 0.5 bpa to 47.4, versus the 46.6 the market was anticipating.

The only reason that total U.S. corn and soybean production came in near their respective pre-report guesstimates was because harvested acres were lowered. For corn, acres dropped to 81.5M, down just 330,000 from the November estimate, despite the USDA acknowledging there’s still a lot of corn not yet harvested, mainly in northern states. For soybeans, the harvested acreage decline was more pronounced, falling about 600,000 to 75M.

This in mind, the USDA said they’re going to re-survey producers yet again ahead of the February WASDE report, in terms of both harvested acres, but also total grain stocks. There was a lot of shaking of heads across the industry when the USDA shared that all said unharvested acres were actually counted in the grain stocks report for what was left in the pipeline. While the debate about how many bushels are actually left out in the field, this is actually starting NASS policy. That said, Dec 1 corn stocks were 11.4 billion bushels (-4.5% year-over-year and below pre-report expectations), soybean stocks were 3.252 billion bushels (-13% and above expectations), and total wheat inventories were 1.834 billion bushels (-9% and below expectations). 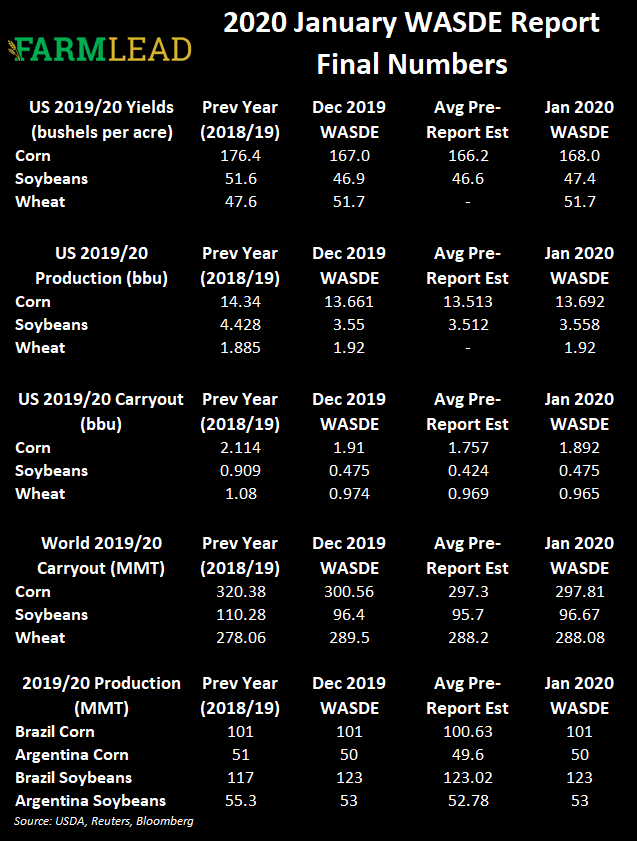 On the demand side of things, the USDA lowered their expectations for corn exports and feed use, but U.S. soybean crush and exports were untouched. Again though, keep in mind that the USDA did not account for the trade deal in this WASDE report.

On the other side of the equator, CONAB, Brazil’s version of the USDA, said that they’re going to be revising their 2018/19 soybean balance sheet, due to more exports than expected. Currently, CONAB is estimating the 2019/20 soybean harvest at 122.23 MT, up more than 1.1 MMT from their previous estimate in December.

Conversely, Agroconsult is estimating that the 2019 soybean harvest in Brazil will only produce 117.6 MMT, citing dry conditions in northern and southern areas, and too much rain in central regions. The firm is also expecting the 2019 Brazilian soybean exports to come in somewhere between 76 and 78 MMT, although it’s widely expected China will buy more American going forward. On the flipside, AgroConsult is expecting 2020 corn exports from Brazil to fall to 37 MMT, down from 2019’s expected record of over 43 MMT. That said, this corn export number could fall in the dryness in southern Brazil persists.

Looking at the wheat market, U.S. 2020 winter wheat acres were pegged at 30.804M. This was slightly above expectations, only about a 1% drop year-over-year, but is still a 110-year low. U.S. hard red spring wheat domestic use was raised by 5M bushels (or about 136,000 MT), helped pull back ending stocks by a similar amount. Durum’s carryout was also reduced by 5M bushels, a reflection of exports increasing to 40M bushels (or 1.088 MMT).

Looking abroad, the USDA lowered its estimate of Australian wheat production again, this time by another 500,000 MT to 15.6 MMT. This is 250,000 MT lower than what ABARES pegged the Aussie wheat harvest at a month ago. Surprisingly, they only dropped exports by 200,000 MT. Russia’s wheat harvest and exports were lowered by 1 MMT, but European wheat exports were raised by 2 MMT, a reflection of the strong pace of shipments so far in the 2019/20 crop year.

Moving past the grain markets, geopolitical risk is back on the front burner thanks to the heightened tensions in the Middle East. One Iranian military official taken out and the Ukrainian International Airlines flight that was shot down a few days later helped rally oil prices a bit. The markets are definitely waiting on bated breath though to see Presidents Trump and XI sign the Phase One trade war deal though, as it will close the door a tumultuous year of trading.

Very clearly though, more protectionism was seen in 2019 and that theme is likely to continue in 2020, barring some softening of this stance by a variety of politicians. Leaning in, one-off trade deals are becoming more of the focus by the U.S. government, like that done with Japan and the negotiations happening with the United Kingdom and the EU right now. Regardless, getting some trade deals done should help provide some certainty around global tradeflows.

There are, of course, many other factors to consider. Supply and demand drive the general equilibrium for grain prices, but currencies, tariffs from said trade wars, and outside commodity costs (i.e. oil prices) will always sway momentum. I think that, generally, we’ll see same gains across the complex for the next five to seven weeks, before 2020 acreage starts to become known. Thereafter, weather markets might provide some opportunity to price out any remaining old crop, as well as new crop. However, I’ve talked to many a farmer in the past six months who said they wished they would’ve priced more during the winter highs.