With no restrictions, spending $153 million seems easy. But when the task at hand is to leverage that $153 million into leap-frogging an entire industry forward, knowing where to commit that cash becomes much more complicated.

Bill Greuel, CEO of Protein Industries Canada, is tasked with ensuring the federal Protein Supercluster funding is invested prudently and leveraged properly. The cluster funding is meant to move the Canadian plant protein industry forward — and quickly, as the entire funding initiative is over just five years with two years already elapsed.

Greuel says that the supercluster has received 59 applications, totaling $480 million worth of interest, suggesting there is plenty of optimism and opportunity for the sector.

Of those applications, 24 are moving forward to a full proposal. The projects cover four critical areas of the industry:

Now beginning year 3 of the 5-year term, one of these projects is already moving forward, and Gruel says that several announcements are set for early in 2020. He says that there should be about nine announced by the end of February.

The entire process may seem a little slow, and Greuel says that’s due to a few reasons. For one, this entire process is quite new. “We’re asking companies to do business a little differently,” he says. Companies are required to collaborate, working with either completely new partners or even companies that may have been competitors in the past.

Because of the unique way the cluster is set up, Greuel says relationship building, building trust, and hammering out details over intellectual property and ownership structure takes time. Plus, whenever you’re working with public funds, there’s added pressure on the accountability of each decision.

Greuel says that matchmaking has been one of the first roles Protein Industries Canada has played in this process — also a new way of doing things. But the end goal is a complete launch forward of an entire industry at a rate perhaps never seen before.

Listen on to hear more from Bill Greuel in conversation with Shaun Haney at Grow Canada: 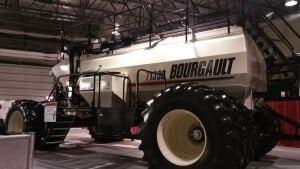