Grain markets saw some heavy selling on Friday, January 24th, putting the complex in the red for the week as bullish factors seem to disappearing faster than patrons at a open bar that’s run out of booze.

Adding on is the worrisome coronavirus, whose quick spread through China (and elsewhere, including the U.S.) is pushing investors to sidelines, be it in commodities or equities.

With the Chinese government quarantining a couple cities and travel restrictions on more than 35 million people, there are concerns that Chinese shoppers won’t venture out during Lunar New Year celebrations (and thereafter). Further, there’s rumours that China will cancel the New Year celebrations in Beijing and close Shanghai Disneyland to slow, if not stop the spread of the disease. Therefore, the economic impact of the coronavirus could be significant, not just in China, but globally.

Soft red winter wheat prices in Chicago were the only commodity to find gains this week, it would have been much more positive if it were not for the heavy losses on Friday alongside the rest of the complex. Some warmer weather prompted concerns of the fall-seeded crop in hibernation potentially re-starting its growth and then being killed off as colder weather returns.

Also, French rail and port services have been severely disrupted as a monthly-long public transport strike have left a lot grain shipments just sitting around in a backlog. This could open the door for buyers to switch purchases to other origins like the U.S. or Canada. It’s worth noting that already, U.S. wheat exports (of all types) are sitting at nearly 15 MMT through Week 32, up about 16% from the same week a year ago. Conversely, non-durum Canadian wheat exports remain 16% below last year’s levels with just 7.13 MMT sailed through Week 24 of their 2019/20 crop year.

Conversely, Canadian durum exports are performing 46% better than a year ago with 2.3 MMT sailed. For context, it took Canadian durum exporters nearly an extra 3 months to reach that level of shipments during the 2018/19 crop year. We know that Algeria has bought less cereals – including durum – by about 14% compared to a year ago through November, thanks to stronger production amidst their focus on self-sufficiency. That said, Turkey is helping cover the difference, buying more durum from Canada than they have in years past. Contextually though, average cash durum prices in Western Canada remain stuck around that $7.50 CAD/bushel level. 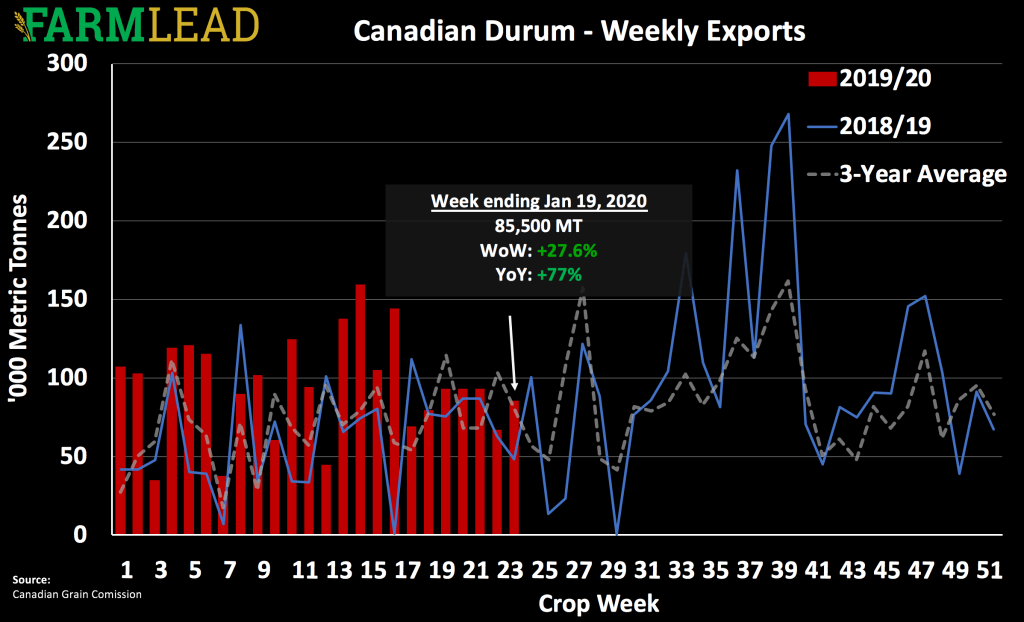 Corn and soybean prices weakened this week on the prospects of some bigger harvests from South America and ongoing questions about Chinese buying more ag goods from the United States. For the former factor, timely rains in Brazil and Argentina are helping the production potential in both countries. However, because the Brazilian soybean crop was planted a bit late, it’s estimated that at least 30% of the crop needs more rain before combines take them off. On the corn side of things, the planting of the safrinha/second-crop has started in areas where the soybean harvest is finished. Most analysts agree that Brazilian corn prices should stay strong due to combine domestic and export demand.

Back on this side of the equator, corn prices fell alongside soybeans as the investors in the oilseed seem to be losing patience as to when China will ramp up their purchasing to meet their committed targets in the Phase One trade deal signed on January 15th. Some analysts suggest that we’ll have to wait for the apex of the Brazilian harvest to be done, as lower prices there caused by more supply coming to market will put pressure on American soybean prices as well. This means that we might not see improved U.S. soybean sales to China until at earliest, February, more than likely in March.

All things being equal, I can’t summarize the situation of China buying more American soybeans than Jon Hilsenrath of the Wall Street Journal did: “The U.S. and China have ended up in an odd position. China, a one-party state with communist roots, insists that market forces determine the outcome of its purchase commitments. Meanwhile the U.S., a voice for capitalism, depends on massive state intervention to meet purchase commitments.” Meanwhile, weekly U.S. soybean shipments remain far behind what we saw pre-trade war, albeit they are tracking 23% above where we were a year ago during the thick of the trade war. 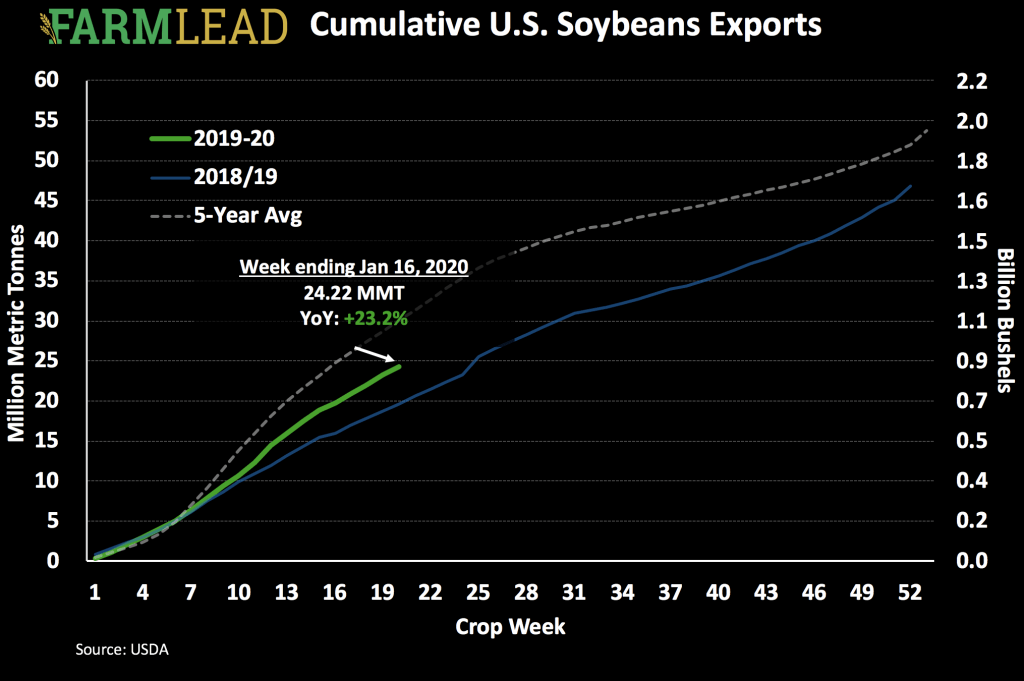 Finally, this week, we shared with our FarmLead users the next generation cash grain marketplace we’ve been developing for the past 9 months, Combyne. This new cash grain trading tool, available on both web and mobile app, is built on a combination of trust, communication, and expanding one’s grain trading partners. While the tool has been beta tested in select markets for the past 6-7 months, Combyne’s public availability has already seen 1,000s join the tool, which one farmer I talked to this week called the combination of Linkedin and Whatsapp for cash grain trade! Combyne has been noticed in other ways too: I was extremely proud to, on behalf of our incredible team, accept the 1st place award at the Innovation Showcase at Manitoba Ag Days this week! 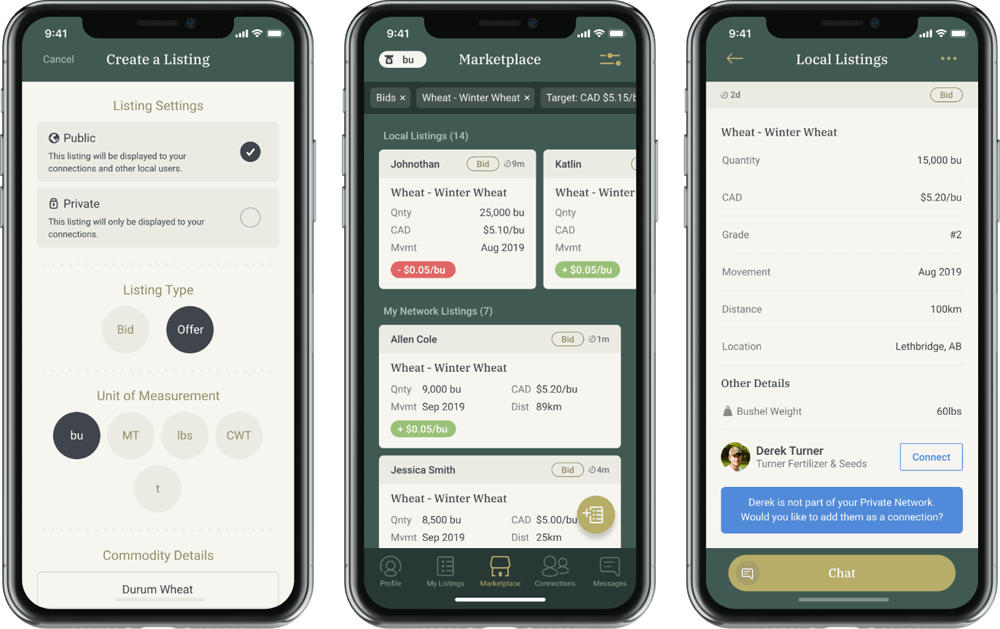 In addition to no transaction fees, you can see who you’re dealing with up front and can quickly make phone calls to your trusted grain trading network directly from the app. Ultimately, Combyne is built to help manage both your current relationships, in addition to buildings some new ones! This in mind, you can easily update your normal trading partners of your next deal intentions by sharing your Listing(s) with them. This helps set expectations, so no one is wasting each other’s time on a random prospecting phone call. Since there are no subscription or transaction fees, all your trading partners can easily join your Combyne network at no cost whatsoever.

Other than the early success/adoption of Combyne, there were also a few other takeaways from the Manitoba Ag Days show this week. First, not many farmers are looking to buy new equipment, let alone used gear. Some people I spoke to think that this downturn in the equipment market might last another two years, but that’ll be largely dependent on how the 2020 growing season performs! Speaking of, unsurprisingly, there’s very strong indications that we’ll see a lot more oats, durum, canola, and green peas planted in the Canadian Prairies in Plant 2020. It’s a good thing there’s at least plenty of oats seed out there!

Intuitively, this means that prices for these commodities are likely to pull back below where we’re at right now, so if you’re thinking about planting some, seriously consider getting some forward contracted coverage sooner than later!

Clean Seed is rolling out a lighter, updated version of its Smart Seeder this spring after having formed a joint venture with a North Dakota-based ag equipment manufacturer. The Canadian company behind the CX-6 Smart Seeder (pictured above) has partnered with Norwood Sales, known for its Kwik Till products, to manufacture the new Smart Seeder…Read more »

Place your bets — This week in the grain markets