Grain prices ended one of the most hyped-up weeks in recent memory very mixed as the Phase One trade deal between the U.S. and China was signed. Put simply, the trade deal signed between China and the U.S. on Wednesday should’ve been a positive for grain and commodity prices in general, but the complex has faltered with many questioning the vague language and corresponding math (more on this below). If not for corn prices rallying 13? USD/bushel on Friday alone (thanks to bargain buying), they would’ve had a very negative close.

Looking at some of the language of the deal, it’s very ambiguous. In Chapter six of the deal, item five states that, “The Parties acknowledge that purchases will be made at market prices based on commercial considerations, and that market conditions, particularly in the case of agricultural goods, may dictate the timing of purchases within any given year.”

Basically, it’s been argued that in this trade deal, China agreed to “buy America” whenever they feel like it. While many of us can agree that this new trade deal should be bullish for soybean prices, the opposite has happened in the past few days of trading since the trade was signed. So what the heck is going on?

In pre-trade war years, China has never spent more than 51 per cent of total U.S. imports on soybeans. That said, while current soybean cash prices at the port are sitting around $10 USD/bushel one could generously assume that as China buys more America, soybean prices could theoretically improve. If that’s the case, then U.S. soybean prices would likely trade much higher than the $10 USD/bushel they’re at now.

Higher soybean prices in the U.S. should also drive Brazilian soybean prices higher, but that’s far from a certainty. That said, if we assume a bullish increase to $11/bushel for an average price in 2020 and at 51 per cent of total spend of the suggested $36.5 Billion would mean about 1.69 billion bushels bought by China (or about 46 MMT of soybeans if converting bushels into metric tonnes). Worth noting is that U.S. 2019/20 soybean exports through Week 19 are tracking 24 per cent higher year-over-year with 23.24 MMT sailed so far. 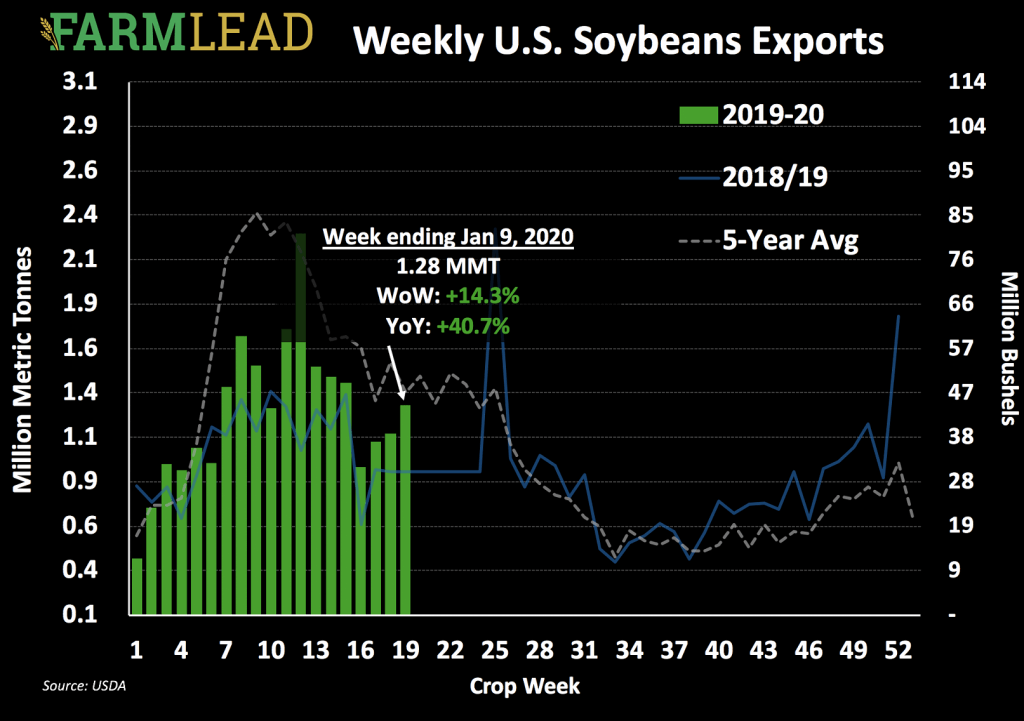 In all likelihood, the more likely guesstimate of the percentage of total spend that China uses on soybeans could be closer to 40 per cent, not 51 per cent. Theoretically, the number of bushels that China buys from the U.S. with this trade deal in place would then be likely closer to 1.33 billion bushels of soybeans (or 36.2 MMT). This would be closer to the value and tonnage of U.S. soybean exports bought by China in 2016, but still a very high number (albeit certainly more bullish than what I suggested in my 2020 soybean prices outlook!) in today’s trade environment.

All things being equal, if the Chinese start to buy more American, despite prices being cheaper elsewhere, there may be a case for a World Trade Organization challenge. Brazilian or Canadian soybean exporters could arguably make a case that the U.S. has an unfair advantage for trade with China. However, I suspect the language in the trade deal mentioned above is intentionally written vaguely so as to combat any challenges at the WTO level. Side note: more global trade players are even questioning the credibility of the WTO anymore thanks to the U.S. dropping funding of its Appellate Body and stalling the selection process for filling six judicial vacancies on it.

Looking at other crops, canola prices traded mostly lower this week following soybeans but a discrepancy in the domestic crush volume admitted by the CGC didn’t help this week. Canadian crush volumes have supported recently strong prices, which in turn has been because of some strong canola crush margins. Therein, this has helped make up for some weaker canola exports, which are now running nearly 9 per cent behind last year’s pace through Week 23 with just 4.02 MMT sailed. 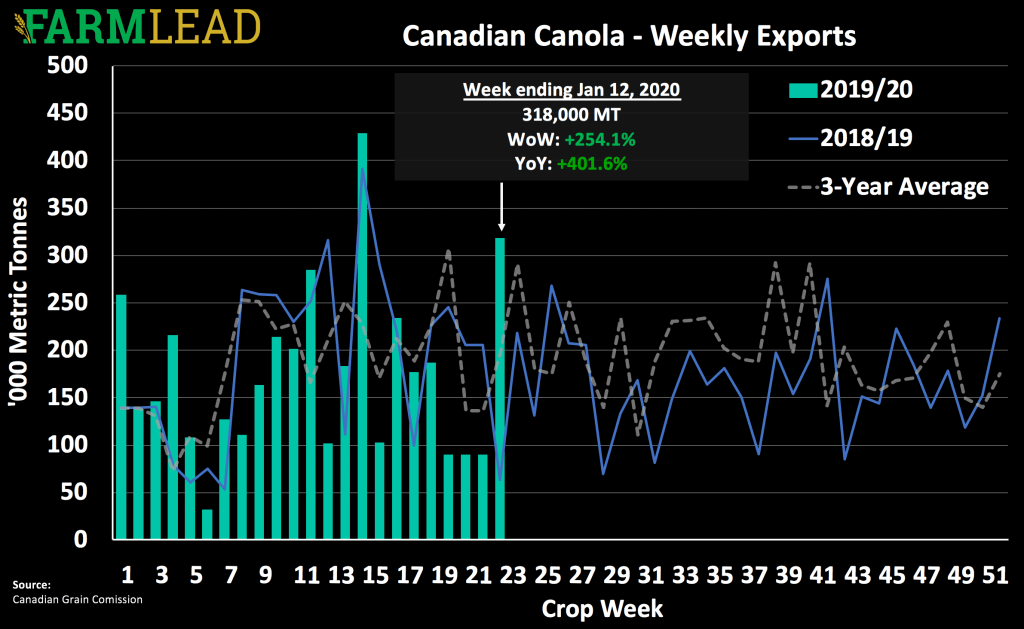 However, canola prices might have been artificially supported by said crush, because said crush is actually completely wrong. The Canadian Grain Commission said this week that incorrect reporting by “primary licensees” meant the 4.86 MMT of disappearance is likely overstated by about 700,000 MT. With this lower number realized, it might put 2019/20 Canadian canola ending stocks back up above 4 MMT. Frankly, this adjustment puts me more in the “break it year” from my 2020 canola prices outlook.

Finally, vegetable oil prices in general have rallied over the last 3 months, adding about $100 USD/MT depending on the type of oil. Palm oil has seen the biggest move though, reducing its spread to rapeseed oil by 50 per cent from $360 to $180/MT while the spread to soybeans has fallen by about 75 per cent to just $40 USD/MT.

The reason that the spread was so high to begin with was because palm oil demand had a banner year in 2019, seeing a consumption growth rate that was double the growth rate in production. As palm oil got more expensive, international buyers started to buy up substitutes (i.e. soy oil and canola or rapeseed oil). That said, the USDA said last week that the “current price strength (in vegetable oils) is expected to continue until growth in palm oil supplies exceeds demand.” What this basically means is that canola oil prices and crush margins will likely remain fairly strong, albeit not as much as we once thought (and as mentioned above!).

Wheat prices were slightly stronger this week on reports that Russia will limit grain exports to 20 MMT from now until June as means to ensure domestic food security and limit food price inflation. While Russia’s grain exports for the period is estimated to come in somewhere around 15-20 MMT, the point is that the government intervention/regulation is seen as a negative construct, creating non-supply or demand factors that could impact wheat prices.

Also, some warmer weather in the U.S. Southern Plains could inadvertently restart the growth of the winter wheat crop in the region. While this is bullish for new crop 2020/21 winter wheat prices, I’m reminded by the record carryout of wheat around the world, and how that might cap any significant rally (at least above what we’ve already seen over the last few months).

Finally, good rains in Brazil this past week is putting some pressure on corn and soybean prices. This is especially true for corn since the dry weather in the south is creating some serious production concerns for both the current crop and the safrinha second crop harvest. Looking internationally though, Brazilian corn farmers are worried about the huge loss of a demand partner in Iran, after the country publicly severed any corn purchasing plans from Brazil after Brazilian president Bolsonaro publicly supported the recent killing of Iranian military leader (and terrorist) Qasem Soleimani. Annually, Iran buys about $2.2 Billion USD of Brazilian corn, soybeans, and beef from Brazil (or at least they used to).

Bottom line is that even with the “trade war” supposedly stalled with the signing of this past week’s deal, I can guarantee you that this new era of protectionist trade policies are far from over.