With multiple wet harvest years in central and northern Alberta, many producers have invested in a grain dryer, or are certainly looking into it. Scott Keller, a farmer from near New Norway, Alta., recently dug in to the numbers surrounding the cost and benefits of owning a grain dryer.

Keller first set up a grain dryer in 1995 on natural gas. After some recent Twitter conversations he had about the cost of running a dryer in propane versus natural gas, he decided to dig into the numbers — and not just for his own farm, but for others around. He did some research on his own, as well as using some numbers from the Prairie Agricultural Machinery Institute (PAMI).

“The numbers we came up with based on the average natural gas price we’re paying on the farm during grain drying season (September-December), versus what that conversion would be on the exact same dollars to dry for propane — we’re coming up with the number that your propane would have to be somewhere around 11 cents over the past four years. ”

After digging some more into twitter and comparisons through other producers, it came out to a massive difference.

“We’re talking four times the amount of money to operate on propane. That was a big eye-opener for me, because before I just thought ‘sure it’s more expensive, but it’s only 25 or 30 per cent more expensive’. But then, really who cares if it costs you an extra half a cent, but when we’re drying grain and it’s costing us 4.8 cents/bushel for utilities for the power and the natural gas, and these guys are paying quadruple that for their fuel, they might be paying 15 cents to dry that grain.”

If there’s such a large price difference, why don’t producers just convert to natural gas? It’s all about access costs and hookup fees, says Keller.

“The province is split into different gas co-ops, and some of it is privatized as well, in some regions. The cost of hookup is such a great gradient on how expensive it is. So on our gas co-op, it’s $7,000, which is dirt cheap. Some guys are saying it’s $100-grand to bring in natural gas,” he notes. “Some of these farmers are like, ‘well we’ve got to bring in a line for two miles,’ and some guys are like ‘it’s $80,000 and it’s across the road from me. So these are situations where it is privatized corporations because there is no competition in the area. You can’t just hire whatever contractor you want to bring in a gas line, you have to go through your provider.”

Although the costs are through the roof, Keller notes that it won’t take long for the natural gas to pay for itself.

Keller adds that he is aware there are many moving parts when it comes to natural gas installation and that he feels it’s “not just the case of people taking advantage of farmers.” 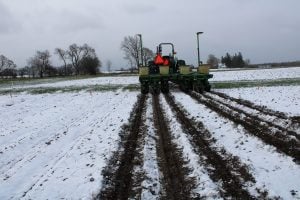 Relationship Awareness in the Decade of Brain Science