Tar spot, a new corn leaf disease, has moved through the U.S. Midwest, into Michigan and Wisconsin, and now sits at the doorstep of Ontario’s corn growing region.

Characterized by tar-like speckling on the upper surface of corn leaves, the fungal pathogen has been delivering yield hits ranging from 20 to 60 bushels per acre (in highly infected fields) since it was first identified in Indiana and Illinois in 2015.

Crop researchers are now assessing management options, but there’s a lot of work to be done, says Purdue University pathologist and assistant professor Darcy Telenko. At the recent Ontario Certified Crop Advisors Association (CCA) convention, Telenko told CCAs that where the disease has gained a foothold it tends to flourish in cooler temperatures with long periods of leaf wetness — such as long morning dews and/or extensive rains.

“If it’s not here (in Ontario) it’s something you need to be watching for,” says Telenko. “When it arrives, environmental conditions will determine if it’s going to be an issue.

On this episode of Corn School, Telenko tells RealAgriculture’s Bernard Tobin that researchers are taking a close look at hybrids across the midwest to identify susceptible hybrids and accessing “initial data to see if there is any true resistance.” (Story continues after the video.)

Telenko says fungicides would be the next line of defence. Application timing is critical and growers need to scout early to identify the disease and determine whether a fungicide is required. In 2019, Telenko notes that VT-R1 timing for applications “worked perfectly” but timing will depend on the onset of disease and the severity within a field. She says researchers will know more as they have more time to study the disease and accumulate data.

The best advice Telenko has now for growers is to get out and scout. When you see something suspicious, she recommends scraping the suspected area to ensure it’s not insect frass. Tar spot is also often confused with various leaf rusts. If there’s a pustule rupturing on the surface of the leaf, it’s likely a rust disease. Tar spot really is like a fleck of tar that’s embedded within the tissue, says Telenko. 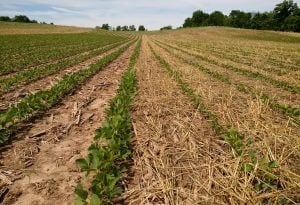 Soybean School: Stick with adapted varieties when planting is delayed