Grain markets closed the past week mostly higher as short-covering and bargain buying helped stop the slide seen since the U.S.-China Phase One trade deal was signed. The buying comes ahead of the February WASDE report, published on Tuesday, February 11th but the big cloud of uncertainty that remains over both grain and broader markets is the economic impact from the coronavirus. Ultimately, most activity in grain markets this past week were influenced by China.

Concerns about the coronavirus spreading remain but markets are bouncing on reports that quarantines are starting to slow the spread. Regardless, those watching global economic activity continue to be concerned with the disruption in logistics and demand as hundreds of millions of people change their normal daily habits.

That said, in an attempt to preserve some market transparency, China has put out an official report that they’re working to minimize disruptions in the movement of feedstuffs and livestock. As an indication of China’s effort to minimize food price inflation, Tyson Foods’ quarterly earnings report stated that pork sales to China are up nearly 600 per cent year-over-year. Even more, the White House reported last week that Chinese President Xi told U.S. President Trump that China will meet their trade targets despite logistical disruptions due to the coronavirus.

Will any of this be reflected in Tuesday’s February WASDE report though? Probably not. The USDA has stated that they’re only going to report on “publicly available information and data” pertaining to the Phase One deal. My translation of this is that we should not get our hopes up (especially if we’re using the last few WASDE reports as benchmarks for what the market is hoping for and what the USDA actually reports.

Nonetheless, there’s some buzz that we could see a bigger U.S. soybean exports number, which are currently tracking 25% better than las year with 26.8 MMT sailed (or if converting metric tonnes into bushels), but that’s still well below the historical average. The disappointing sales pace of U.S. exports to China is likely also a function of the amount of soybeans coming to market from Brazil. Accordingly, the South American production and export numbers will be closely watched items in Tuesday’s WASDE. 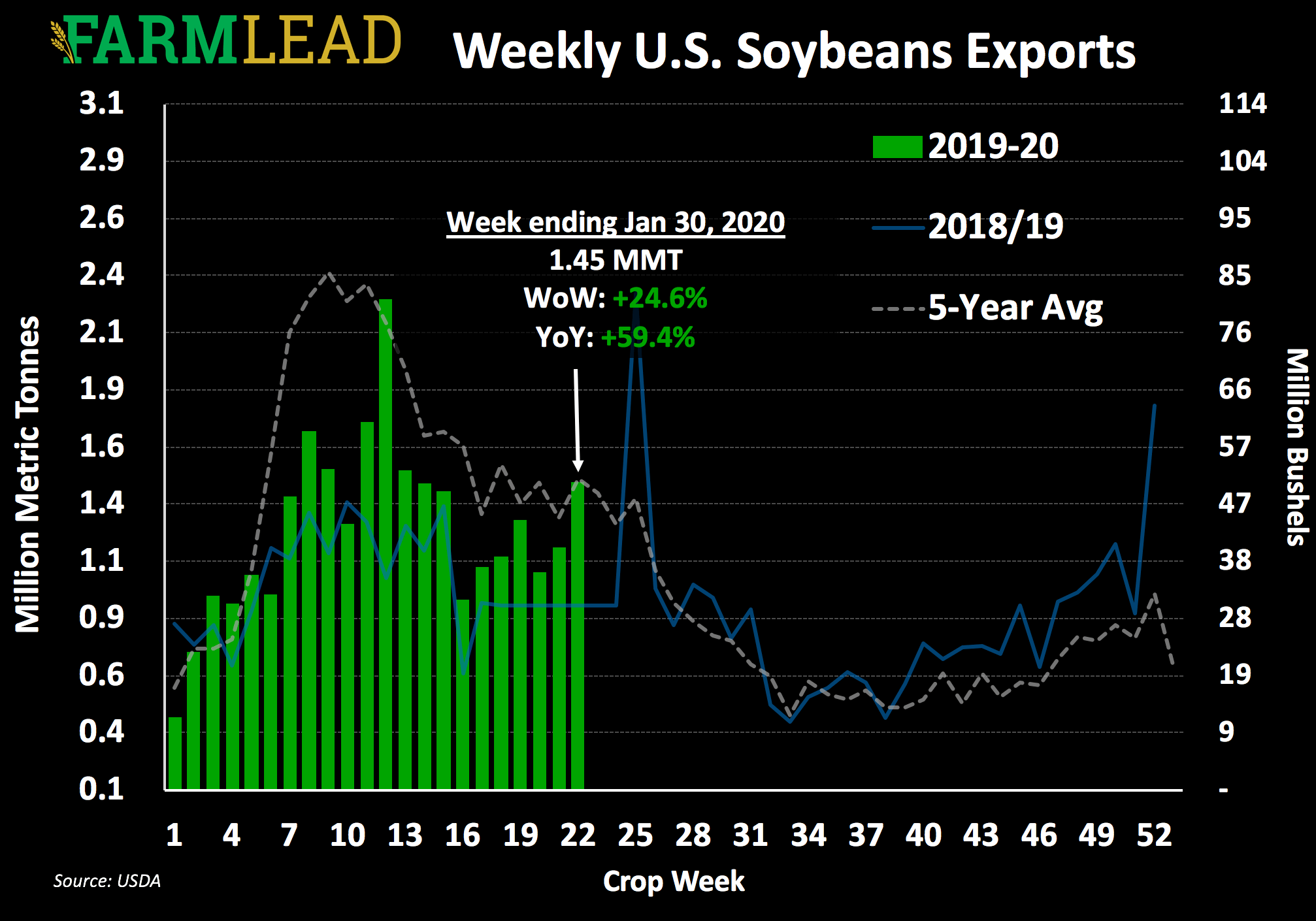 Most estimates for this year’s soybean harvest in Brazil is around the 123 – 125 MMT level, which would be a new record. To date, the soybean harvest is tracking a little bit behind last year’s pace but last year’s crop was planted very early and thus came over very early so we should keep that in mind (and I think soybean prices are keeping it mind as well!). That said, some rains have kept combines out of the field but overall, early yield numbers of this year’s Brazilian soybean harvest are being viewed as positive.

Next door in Argentina, weather has been supportive for a strong planting pace with 100 per cent of the soybean crop planted, and corn acres not far behind from being finished. In terms of the Argentine soybean harvest, the Buenos Aires Grain Exchange is forecasting a haul of 53.1 MMT, up 2.1 MMT from their first estimate earlier in the year.

With 2019/20 corn crop nearly all planted in Argentina, estimates from the USDA’s attaché there are that farmers will take off 48 MMT. This is 2 MMT below the official USDA forecast, but whereas the head office is expecting Argentine corn exports to hit just 33.5 MMT, their office in Buenos Aires thinks Argentine corn exports to hit a new record of 38 MMT, mainly because of attractive export prices. Further, many Argentine farmers forward contracted more corn this year as they tried to get something on the books before export taxes went up with the new federal government elected in December.

We know that there’s a lot of competition in corn exports right now. For example, after a massive record campaign of corn exports by Brazil in the 2018/19 crop year, corn exports are expected to fall in 2019/20. Picking up the slack now is Argentina and Ukraine (who’s shipments of all grain exports are up nearly one-third compared to year ago, including 16.5 MMT of corn exports). With Brazil’s corn exports pulling back, American corn exports might be able to find some more homes and improve from where they’re currently tracking which is about 50% behind what we saw a year ago at this time.

In the wheat complex, AgriCensus reported that wheat futures on China’s commodity futures markets hit their highest level in nine months due to a recent surge in wheat-based products since the spread of coronavirus is negatively impacting food movement. On a related function, Chinese wheat buyers bought some French wheat, bringing the total of shipments between the two countries to 1.3 MMT since July 2019. This is a massive bump compare to the five-year average for the same period of just 29,000 MT.

As it relates to Canadian grain shipments to China, we continue to see subdued demand compared to a year ago. While pea exports are higher, we can count canola, flax, wheat, and barley as all seeing slower shipments compared to this time a year ago. Ultimately, it’s not like this is a depression compared to a year ago, but the impact is likely in the range of 20 – 50 cents CAD/bushel in terms of what levels prices would be for these commodities if exports were in line with a year ago. 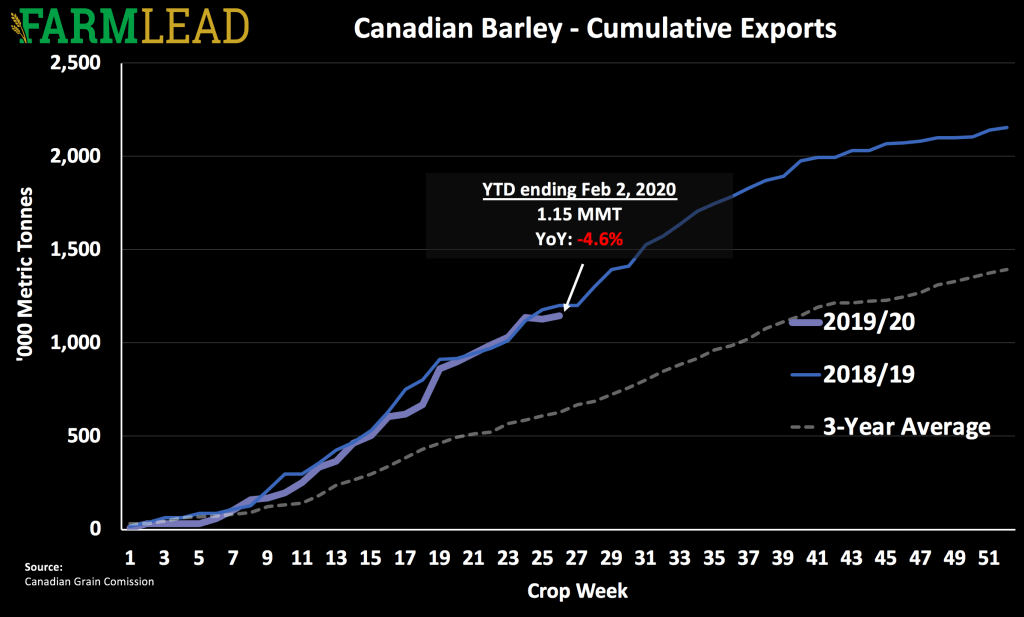 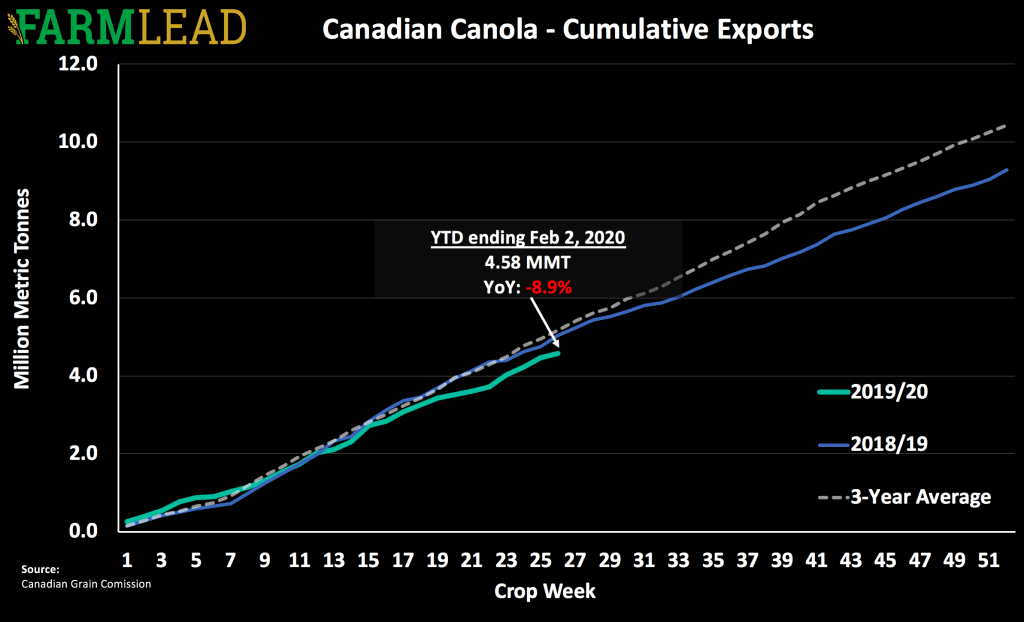 That price differential is not a what if though. Comparing year-over-year benchmarks is easy to do when it comes to key grain market indicators like acres, production, exports, ending stocks. However, from a grain marketing perspective, one should try to avoid recency bias as much as possible. More acutely, this means that, just because the price for one of your crops was higher a year ago, doesn’t mean that the market will get back to those levels this trip around the sun. Just like Mother Nature brings different conditions every year, your grain marketing plan needs to reflect current conditions. One of the only things that you should be bringing with you from the previous year in your grain marketing plan is lessons learnt.

Could Trump Create an Opportunity for Canadian Oilseed Exports to China?