The company says the closures are “aimed at improving its operational efficiency and right-sizing both its manufacturing footprint and sales force in Canada.”

The Trenton plant is scheduled to be shut down in September of this year, with the Saint John facility closing in January 2021. Saputo says production from both sites will be integrated into other plants in Canada.

“Over recent years, Saputo has maintained efforts to pursue additional efficiencies and decrease costs while strengthening its market presence. This decision is part of the company’s continual analysis of its overall activities,” says a statement from Saputo.

Approximately 280 employees will be affected by the closures, with the majority of those in Saint John. The company says some staff will be offered an opportunity to transfer to other locations in Canada.

“I am obviously very disappointed to learn that a large company like Saputo will be shutting down some facilities. Naturally, my thoughts are with the workers affected and their families,” said federal Ag Minister Marie-Claude Bibeau in Question Period on Thursday. “We will see what we are able to do.”

Saputo shared the news as part of its third quarter earnings report, which showed adjusted net earnings for the three-month period ending December 31, 2019 totalled $204.2 million, an increase of $29.8 million or 17.1 percent from the previous year. 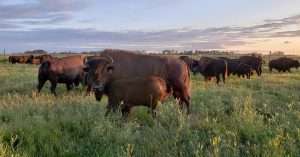 For a short time, A&W will be offering bison burgers exclusively in Saskatchewan. The company explains after a successful trial in its Manitoba locations during the spring, the burgers will be brought to the prairie province until supplies last. The product itself is from Canadian Rangeland Bison & Elk located near Lacombe, Alta. "Saskatchewan is…Read more »

‘Beef brings people into the store’: A surprising retail trend heading in to the holidays