Grain markets – and its participants – are likely relieved to see the month of January finish. The first month of 2020 started with much optimism as the trade war deal between China and the U.S. was set to be signed. However, grain markets were impatient and with no increase in buying of U.S. agricultural goods by China, the sell-off started before the ink of the Phase One trade war deal was even signed!

For the month of January, soybeans, canola, and Minneapolis HRS wheat were the biggest losers, dropping 8.7 per cent, 5.8 per cent, and 4.9 per cent respectively on their March front-month contracts.

The move to the downside was accelerated in the back half of the month, especially this past week: the past five days of trading saw soybean prices dropping 0? USD/bushel (or 3.3 per cent) at the Chicago Board of Trade while canola futures fell $19 CAD/MT (or 4 per cent). In the wheat complex, both Chicago and Kansas City winter wheat lost about 20 cents.

Part of the explanation behind the drop in not only grain markets but also broader equity markets is the concern over the spread of the coronavirus out of China. There are many trying to trace the impact of the SARS virus outbreak in 2003 and what happened to grain markets then. The big different between then and now is China’s economy: it accounted for just 4 per cent of global GDP in 2003, versus today’s 16 per cent share of the global economy!

Various countries around the world are recommending to not travel to China right now, with explicit instructions to avoid key areas in the People’s Republic where the coronavirus is most active. In line with that link, many airlines including British Airways, United, and Air Canada have either completely suspended all flights to and from China, and/or drastically reduced the number of planes available flying those routes.

Oil and copper prices – two the of the benchmarks for not only global commodity trade but also general economic indicators – have dropped to multi-month lows, losing more than 15 per cent and 10 per cent, respectively. The reason behind this happening is a general slump in demand for these types of commodities, among other goods and services. Basically, with less travel, less going out, and thus, less need for various goods and/or services, there are less needs for these types of commodities so positive economic behaviours by people starts to sink.

For example, think about the number of flights that have been cancelled and all the fuel that they would regularly consume. Now think about all the people whose jobs require them to travel to China – can their level of productivity remain at pre-coronavirus levels? That’s highly unlikely. Further, global brands like Starbucks and McDonald’s are closing a large significant amount of storefronts in China as a precaution against the growing fears that their customers and employees could catch the coronavirus.

Thus, the coronavirus doesn’t necessarily have a direct impact on grain markets, but more-so an indirect one. Economic activity is all linked together and expectations were high going into the Chinese New Lunar Year celebrations but people have been told to stay home and in many areas, to not even go to their office for another few weeks. Now they are not spending their disposable income on eating out, or even that big meal for their family at home. It might not mean much when you think of it in terms of one or two families, but when hundreds of millions of Chinese families all slow their economic activity because of the coronavirus — this would be like a bullet train slowing its speed from 200 mph to 20 mph.

Accordingly, we’re talking about less meat consumption by the world’s largest market of meat eaters. That means that less feedstuffs for the animals are needed since there’s not as much demand for said animals. This in turn means less likelihood that China ramps up its soybean buying from the U.S. (or any other agricultural product for that matter!). This week’s U.S. grain exports sales report showed just 471,000 of U.S. soybeans were contracted by international buyers last week. And while this was near the bottom end of the range of pre-report expectations, it’s nowhere near the level the market was expecting, especially with the trade deal signed. But with the possibility of U.S. agricultural exports to China returning to pre-trade war levels starting to dwindle, should we be resetting our expectations of where soybean prices go now?

My answer is no. I think the market has been a little impatient and frankly, now with soybean prices about $1/bushel below the highs seen just before the trade war deal was signed, you might think that China would start to ramp up their buying. It’s certainly a possibility but we have to be mindful of the Brazilian soybean harvest, as well as the general slowdown this time of year. Put another way, soybean prices are in tough spot but it’s likely that we’re near the lows, if not already at them.

With those sort of losses in mind, grain markets are basically telling American farmers to plant less soybeans, and instead more corn. While we’re still a few months away from the thick of Plant 2020starting, the weaker demand for soybeans could easily mean more corn acres. If that’s the case and U.S. farmers plant something in the neighbourhood of 94 or 95 million acres of corn, that could mean a 2020/21 U.S. corn carryout of nearly 3 billion bushels (assuming trendline yields). With demand not as robust as used to be, that potential price equilibrium becomes concerning.

For example, U.S. corn exports are tracking 50% behind where they were a year ago with just 10.51 MMT sailed through Week 21 (or 413.8M bushels if converting metric tonnes into bushels). However, it’s worth noting that last week’s actual shipments of corn exports were the second-highest of the crop year. On the flipside, the poor quality of U.S. corn this year – especially in the Northern Plains – could potentially limit corn exports sales to China. 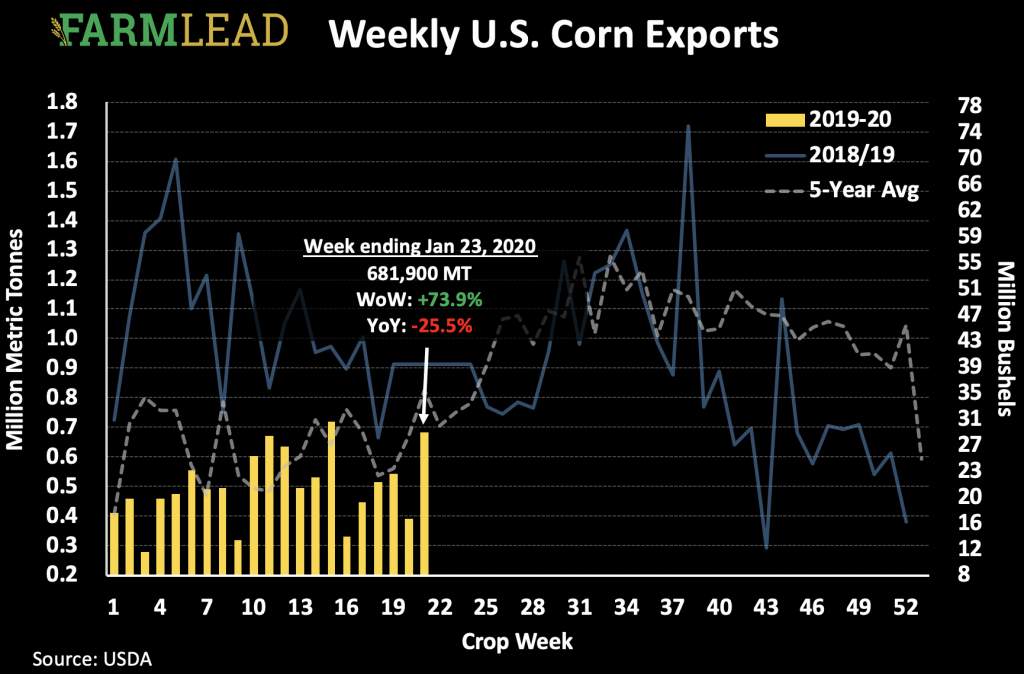 Looking at the wheat market briefly, in meeting the WTO’s ruling that China must allow private buyers to use its unused wheat import quotas, China recently bought some wheat from Australia, Canada, and France, which caught grain markets a bit off guard as it wasn’t really expected. On a related note, Tunisia’s state grains agency has asked suppliers to avoid buying French wheat due to the disruption in shipments due to the labour strikes there. Through week 25, Canadian non-durum wheat exports continue to fall behind last year, with just 7.37 MMT sailed 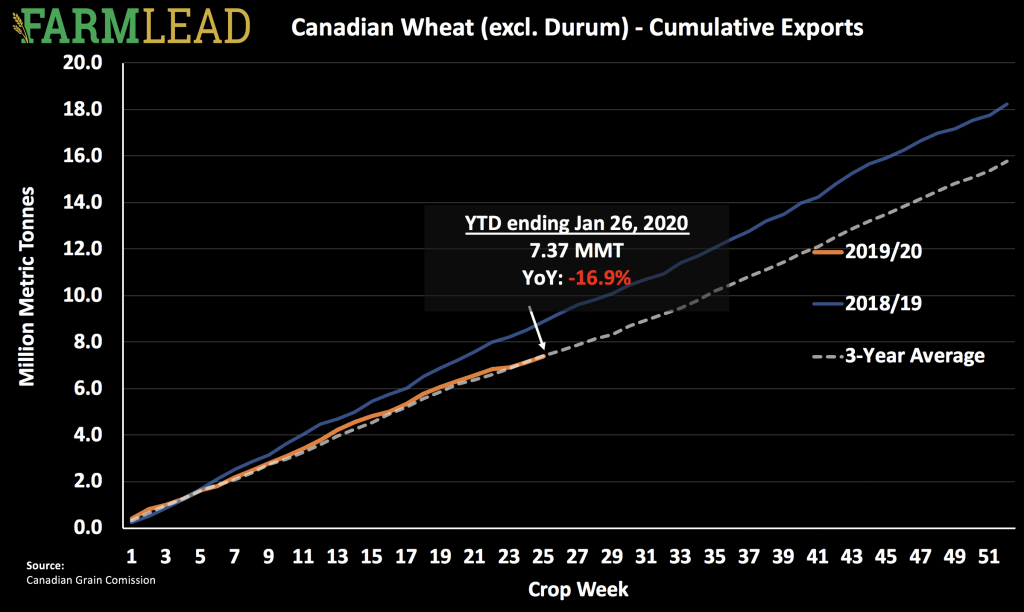 The bottom line in all of this is that we have to remember markets go up and markets go down. That said, it’s important to recognize the different scenarios that could play out here and manage your exposure against that. For example, if you had $500,000 of unpriced canola at the beginning of January as the market was peaking, you should’ve been reducing your exposure and selling some. This isn’t to say that canola prices won’t come back to these levels sometime again in the next 6 months, but rather to point out that in these depressed markets, making sales when you can (and not when have to) is a must.

Looking back on 2018 — This week in the grain markets

Touching Bottom? — This Week in the Grain Markets

Ignoring WASDE and the weather — this week in the grain markets