Grain markets didn’t find a lot of love from traders on Valentine’s Day as a red day pushed most of the complex lower for the week. Only soybeans were able to find some gains on the thinking that China will be buying more soybeans now that the Phase One trade war deal is in effect.

While the trade deal was signed back on January 15th, it was agreed that it would be implemented in 30 days (which came on Valentine’s Day) and so only soybeans found some love on hopes that China will begin buying more Chinese soybeans. However, U.S. soybean export sales to China last week were basically just one boat load, albeit total shipments to all countries are up 55 per cent year-over-year with nearly 27.5 MMT sailed.

With Monday being a holiday and grain markets closed, trading on Friday was fairly light after a bit of a volatile Thursday. That day, headlines around the world talked about the spike in the number of cases of people diagnosed with the coronavirus in China to nearly 60,000 and more than 1,300 who have passed away from it. Bottom line is that investors concerns over economic activities were renewed with this re-ignition of the coronavirus continuing to spread.

While we did get February’s WASDE report on Tuesday this past week, it was a relatively quiet event. going into yesterday’s February WASDE report, there was a lot of speculation as to how the USDA would represent a trade deal finally being in place, especially as it related to the soybean market. The USDA did somewhat acknowledge this by raising U.S. soybean exports by 50M bushels, help drop ending stocks. However, most of the market is expecting Brazilian soybeans to be cheaper than U.S. soybeans until April/May, which is usually the bottom of Brazil’s seasonal harvest lows. 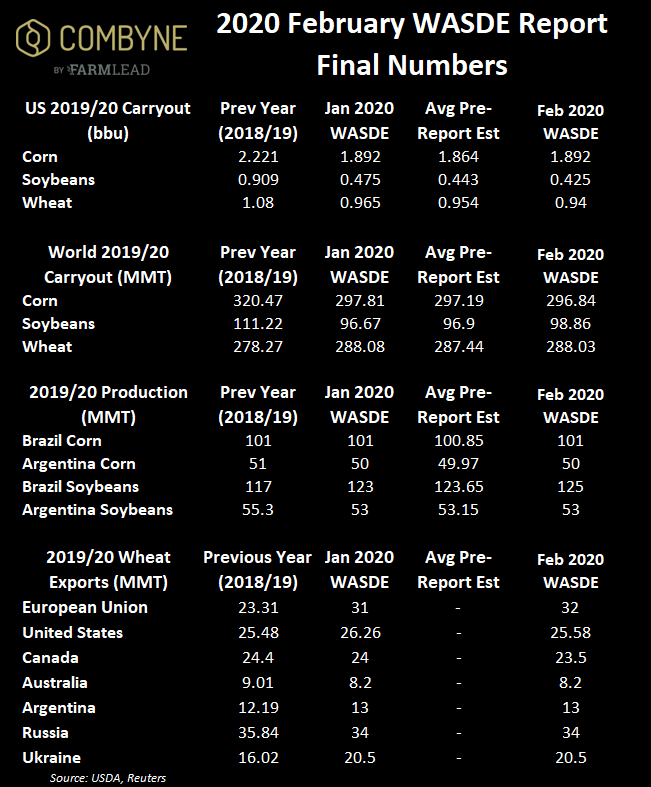 In other oilseeds, the USDA lowered its estimate of Chinese rapeseed / canola imports by 200,000 MT to 2.9 MMT. However, the USDA also raised its forecast of EU rapeseed / canola imports by 200,000 MT to 5.2 MMT (some of which, we know is coming from Canada). Overall, global oilseed ending stocks were raised in this WASDE report by 1.5 MMT to 113.81 MMT, mainly because of China rebuilding their stocks and the Brazilian soybean harvest coming in bigger than what was thought a month ago.

The USDA dropped its forecast of HRS wheat ending stocks for the seventh consecutive WASDE report, this time by 15M bushels, to now sit at 249M bushels (or 6.78 MMT if converting bushels to metric tonnes). Conversely, U.S. corn exports were lowered by 50M bushels and it was a bit surprising that it wasn’t more as U.S. corn exports through Week 23 of are tracking 48 per cent behind last year with just under 11.9 MMT sailed. That said, traders were talking after the WASDE report that they expect to see stronger feed/residual use for corn in the coming months. 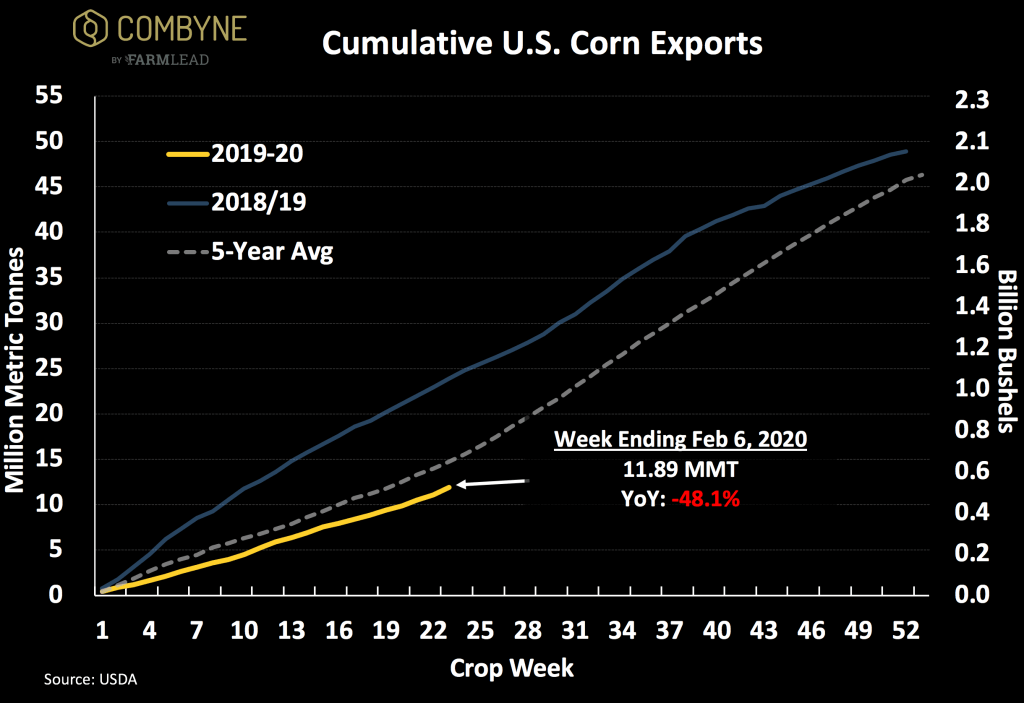 The bottom line though? This WASDE report was relatively a non-event with most of the grain market continuing to monitor (1) Chinese demand, (2) South American growing season/harvest conditions, and (3) any broader issues related to the coronavirus. Given the expected uptick in buying from China, Ray Grabanski of Progressive Ag thinks that the lows are in and “today might be the best buying opportunity seen in 6 years.” Perhaps the bearish sentiment has indeed peaked? I’m not sold yet though on that idea. I expect a few more pushes lower before the gradual rebound starts in late March/early April as the Plant 2020 picture and northern hemisphere weather becomes the focus again.

The next report from the USDA that we’ll be watching for will come in the form of their annual outlook forum, which takes place Feb 2021 in Arlington, Virginia. Joel Karlin of Western Milling shared some great analysis in DTN last week, noting that, over the past 20 years, corn ending stocks for the upcoming crop year tend to be 6.2 per cent higher than what the USDA says in their outlook forum. Comparably, soybean ending stocks usually end up 3 per cent lower than the February Outlook estimate, while wheat’s carryout is 4.7 per cent higher.

Switching gears, the chairman of the India Pulses and Grain Association was quoted at the Pulses Conclave conference that that India’s imports of pulses in the 2020/21 crop year could drop by 60 per cent from 2019/20 volumes. The reason behind the shift is, once again, government intervention as India’s leaders work on trying to maintain strong domestic prices and boost domestic production. Expectations for the 2019/20 rabi winter crop in India are quite strong, including the chickpeas harvest, which should top last year’s output of 10.13 MMT. Given that yellow peas are often imported as a substitute for chickpeas, it could intuitively put a damper on prices for these pulses a year from now. 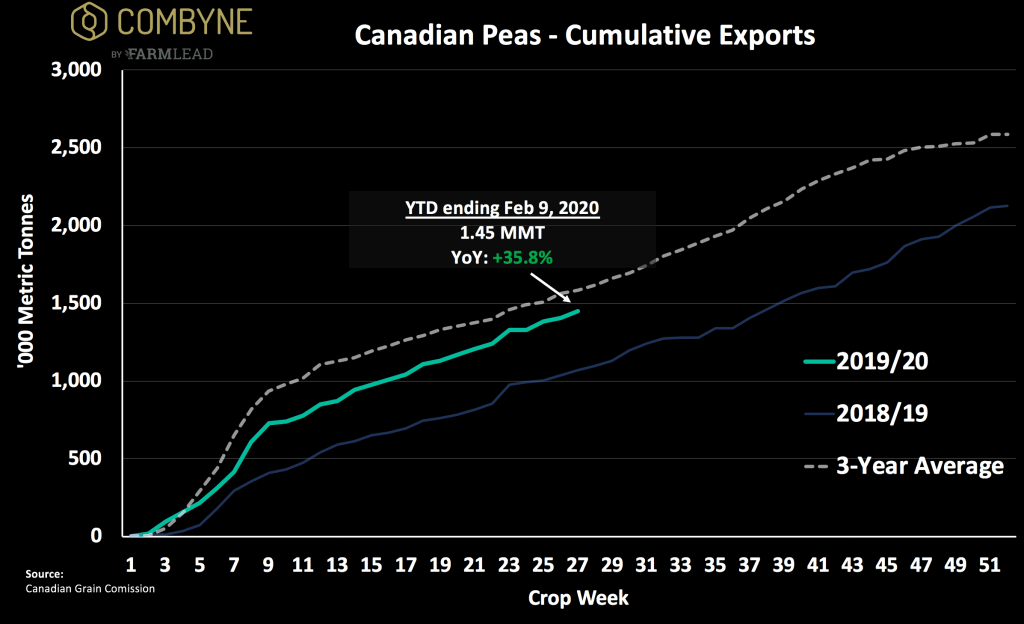 Of course, at face value, this isn’t especially positive for those thinking about putting in peas, lentils, or chickpeas for the upcoming growing season. As a reminder, Agriculture Canada said in their first forecast of acres for Plant 2020 a few weeks ago that the area planted into pulses will be little changed compared to Plant 2019. Quite literally, AAFC is expecting lentil acres in Canada to be the same as last year at 3.78M, Canadian pea area might increase by 5,000 acres to 4.34M, and chickpeas will fall by 96,000 acres to 297,000 (albeit that’s still 16 per cent above the five-year average).

All things being equal, India has no consistent track record when it comes to farm policies, something that Saskatchewan’s agriculture minister, David Marit, called on India to improve at the same Pulses Conclave conference in New Delhi this week. The President of the Global Pulses Confederation, Cindy Brown, echoed this sentiment but also mentioned that net-exporters of pulses have found new markets, noting the increase in the buying of pulses by China, Bangladesh, and others. Nonetheless, India remains the largest consumer of pulses in the world with annual demand topping 26 MMT and that’s hard to ignore if you’re a grower, exporter, or importer.

Wrapping things up are logistics rearing their head once again for Canadian grain markets. Concerns are mounting over how CN’s railways have been virtually shut down due to pipeline protests, despite the large majority of Canadians and First Nations groups in support of said pipelines. With the law not being enforced to clear these blockades, there is undoubtedly an absence of leadership from the Canadian federal government that is negatively affecting more Canadians every day, especially those involved in the grain and energy markets.

Of course, in terms of the United Nations and his campaign for a seat at the security council, the optics wouldn’t be great if Prime Minister Trudeau gave the go-ahead to remove Indigenous protesters and others (even though it would be legal). That said, it’s becoming clearer where Prime Minister Trudeau and his government’s priorities lie every day that the protesters stay where they are. However, when it comes to leadership – especially as the leader of a country – tough decisions are a part of the job.

The main takeaway from my viewpoint is that the longer this goes on, the more likely something terrible will happen – protests of these types in democracies never end well if the rule of law is not upheld. With that said, the blame (and/or blood, as history unfortunately shows us) will be put squarely on the government for their inaction to uphold the laws of the democracy. The main takeaway here is that Canadians aren’t getting the leadership that they deserve in their democracy and it wouldn’t surprise me if the UN picked someone for their Security Council who already has their own house in order.

What’s real, what’s rumoured — This week in the grain markets

Bearishness and bills — This week in the grain markets