Grain markets ended the second week of March in the red as the complex sold-off alongside oil and equities as panic-selling was the only trend to speak of. Corn and wheat futures were able to rebound a bit on Friday, but May soybeans fell to new contract lows on demand fears and some better weather in South America. Amidst the chaos of the oil markets and coronavirus quarantines, the USDA put out their March WASDE report but it was largely a non-event.

While it was blip on most investors’ screens, the March WASDE didn’t have very many changes in it. Quite literally, the USDA did not change anything on the U.S. balance sheet for wheat, nothing was changed for corn, and only seed use increasing by 5M bushels was the only update for soybeans. The only other change from the USDA in the March WASDE report was that they lowered their forecast of average corn and soybean prices by 5?/bushel to $3.80 and $8.70, respectively.

Quite honestly, the only major highlight from the March WASDE report was that the USDA moved around some wheat exports (Canada & Australia down, Russia and Europe up) and increased their estimate of Brazil and Argentina’s soybean production by 1 MMT to 126 MMT and 54 MMT, respectively. However, the USDA kept corn production the same at 101 MMT in Brazil and 50 MMT in Argentina. CONAB – the Brazilian version of the USDA – slightly reduced its own expectations for the soybean harvest in Brazil by nearly 1 MMT to 123.25 MMT. Comparably, they slightly raised their corn harvest forecast by about 410,000 MT to 100.5 MMT. In Argentina, the Buenos Aires Grains Exchange lowered its soybean estimate by 2.5 MMT to 52 MMT, citing too much hot, dry weather (albeit rains are falling as speak and there’s more in the forecast for next week). 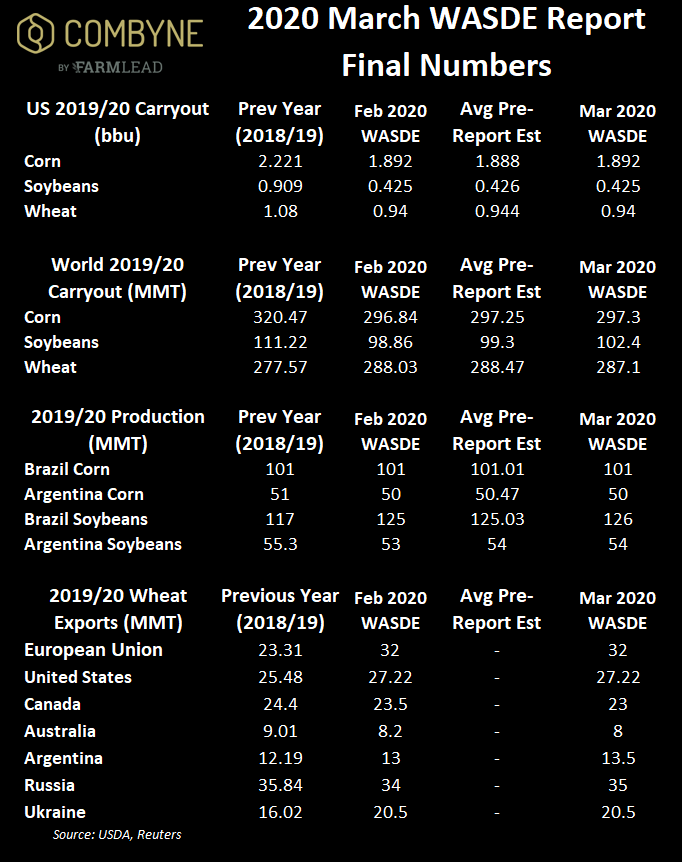 While we know South American accounts for a large amount of the soybean harvest, as the coronavirus pushes people to stay in their homes, the fears of global commodity demand slowing are real. For example, China’s soy oil stocks are sitting 50% higher than a year ago as demand has slowed. This is mainly because restaurants weren’t as busy and so less vegetable oil was needed as less cooking was being done. Last week, China’s soy oil stocks were sitting at 1.344 MMT, and agricultural consultancy firm, Cofeed, says that, with decent crush margins in China, soy oil stocks could rise even further to above 1.65 MMT before the end of this month.

As canola prices tend to follow soy oil closely, this is going to be bearish for canola prices (the pullback in cash markets to date has also been linked to the general pullback in oil prices). As a reminder, this week served as the one-year anniversary of China revoking the export licenses of a few Canadian firms. That said, canola exports have started to improve a bit recently with shipments tracking only 4.3% behind a year ago now through Week 31, with 5.55 MMT sailed. Further, domestic use (read: canola crush) continues to be strong with 6.22 MMT used up so far, good for a 13% jump from the same week a year ago. 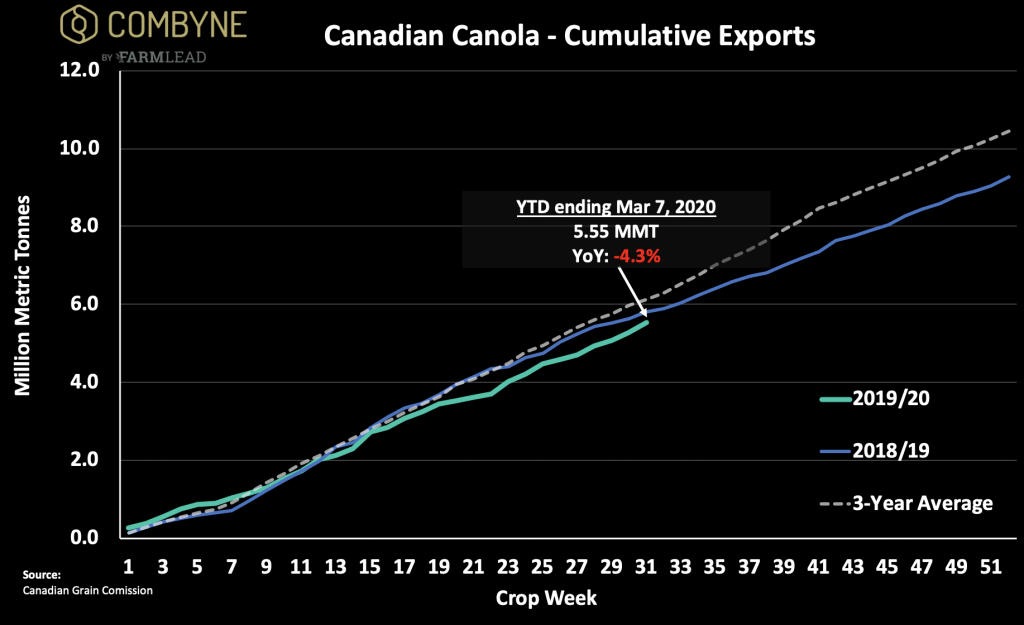 On the flipside, U.S. soybean exports are starting to slow as the coronavirus seems to be dampening any hopes of increased purchasing from China since the signing of the Phase One deal. In fact, last week’s U.S. soybean export sales were the worst since the summer and, for this specific week of the crop year, the worst they’ve been in 5 years at just 304,000 MT. More generally though, actual U.S. soybean exports shipments have been slowing, tracking only 10% ahead of where we a year ago with 30.2 MMT sailed through Week 27 (or 1.11 Billion bushels if converting metric tonnes into bushels). Compare this to a few weeks ago when soybean exports were roughly 25% higher than the pace seen in 2018/19. 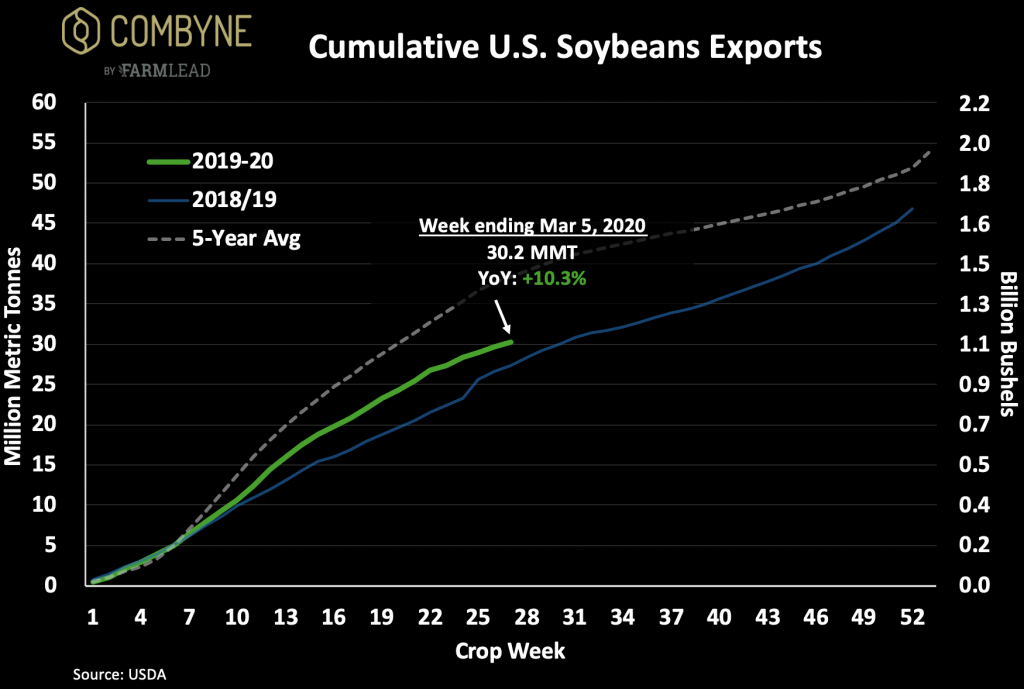 Getting to the broader markets, the week started out on a crazy ride as oil prices dropped by 31% on Monday as panicked selling gripped the markets over overproduction concerns amidst dwindling demand (thanks coronavirus!). It was the worst drop for oil prices since the Gulf War in 1991 and was largely attributed to Saudi Arabia and Russia refusing to agree on a production cut and expectations that global oil demand will see a record decline in 2020. While oil prices did rebound a bit since Monday, they are still down nearly 50% since the start of this calendar year.

Ultimately, most of the world is going into a state of caution, with more companies moving to remote work policies (including FarmLead) and sporting and entertainment events over the next 3 months suspended or cancelled altogether Finally, governments are injecting literally TRILLIONS into their respective economies in addition to cutting interest rates as a means to stave off any recession fears and try to keep the “open for business” sign lit up.

In terms of where we go next, the best lens to look at all this through is with behavioural economics, or the psychology of how people are acting. I, for one, do not think that normalcy won’t show up until at least April. This means that volatility will continue in equity and grain markets and what we used to consider “normal” daily life will be sidelined for a few more weeks. Ironically, numerous studies have concluded that “fear and stress weaken our immune system, leaving us more vulnerable to infection,” something Barry Glasner reminded us this week in an LA Times op-ed (and he’s an expert in this field, as an sociologist and author of the book, The Culture of Fear).

Therein, the fear of contagion has pushed people to increase their preparedness levels, including buying up more food, which will obviously drive up food prices (there’s more demand but the same supply). Nowhere is this more evident than in China where food prices jumped 22% in February compared to the same month in 2019. This is even higher than the 20.6% food price increase seen in January. The clear take-away here is the that people still have to eat, food will continue to be transported, which, in turn, grain markets will still be active with companies have to buy grain! It’s worth noting that grain markets are still trading in the same range that we’ve seen for the last 5.5 years!

The point is, you, yourself cannot control any of this, especially where grain markets go! Instead, during this time of near hysteria, focus on what you can control. This might be getting a head start on your Plant 2020 preparations. Maybe it’s a review of what your cost of production will look like this year. Or making a call to your elderly loved ones or making sure they have enough food if they still live at home.

A big one that I strongly recommend to farmers is having a deep discussion with their banker about refinancing as there’s plenty of better options that have appeared recently. Any of these ideas above are a much more rational and effective use of your time versus scanning your phone and getting caught up in the anxious headlines that the media is pushing.

I’d also suggest reducing any unnecessary travel to a minimum. While you or I may not be at risk because of generally good health, it’s important to be good citizens of our communities by limiting the transferability of the coronavirus to others, namely those more susceptible to serious illness. Much like seasonal lows in grain markets.

Cooling off? — This Week in the Grain Market