For some, farming is in their DNA — whether they like it or not. Even when they set out on a path very different from agriculture, some find their way back for one reason or another; and, frankly, agriculture is better for it.

In this episode of Agronomy Geeks, host Lyndsey Smith is joined by Errin Willenborg: one of those wayward folk who tried to pursue a career in medicine, only to find herself not just back in agriculture, but also falling in love with agronomy, sound research, and extension. 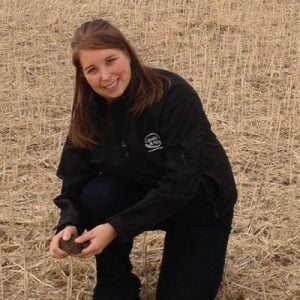 Willenborg is the knowledge and innovation manager for Federated Co-operatives Limited (FCL) — a unique title for a unique business, befitting someone with a rather unique story.

From working ag retail, to moving into to a research role with a producer group, and now leading a team of extension agronomists in Saskatchewan, Willenborg has parlayed her enthusiasm and drive into a successful agriculture career, one that her father, the late Terry Tollefson, was very proud of.

But as you’ll learn in the podcast below, there was a time when this success was in jeopardy; about 10 years ago, Willenborg’s kidneys began to fail her. Her dad had wanted to step in as a kidney donor, but his own health didn’t allow it. And that’s when her boyfriend — and now husband — became her perfect match.

Soybean School: Relying on One Method of Control Won’t Work for Canada Fleabane

Wheat School: Late Planted Soybeans Are Holding Up Wheat Acres — What Are Your Options?