Grain markets mostly ended lower again this week as the concerns about the coronavirus and grain demand continue amidst some volatile trading on the broader equity markets. This said volatility though tends to indicate a bottom is nearby.

Countries around the world continue to provide economic stimulus as a way to mitigate the financial impact of the coronavirus, including the U.S. putting up $8B, Taiwan coming up with $2B, and the IMF providing $50B. Italy is injecting about $4B USD and, in an effort to slow the spread, citizens around the world are being told to say home, highlighted by Italy closing ALL of its schools and universities through the middle of March. Finally, earlier this week, the Bank of Canada cut its benchmark interest rate by 50 basis points (or 0.5%) to 1.25%, following the U.S. Federal Reserve’s similar interest rate cut. While good monetary policy is meant to maintain stability in the markets, interest rate cuts do not cure viruses.

As a follow-up to the USDA’s annual Ag Outlook forum a few weeks ago, ABARES, Australia’s chief commodity forecaster had their own annual conference. At it, ABARES suggested that Australian farmers will increase acres seeded into wheat by nearly 20% from last year to 29.7M. Combined with the thinking from ABARES that Aussie farmers will get better moisture in the coming months, they are estimating that 2020/21 Australian wheat production will hit 21.3 MMT. This would be a 40% climb from the recent downgrade of this past year’s wheat harvest by ABRES 15.17 MMT, which they just updated a few weeks ago.

After all, wheat is a weed and can grow in some pretty tough conditions, but there is not a lot of soil moisture in the Aussie dirt. Ultimately though, many analysts, including yours truly look at this new estimate by ABARES as just a dart thrown and nothing to really take too seriously. Yes, Aussie farmers will increase wheat acres, but this wheat harvest forecast is definitively questionable. In the meantime, Canadian wheat will continue to get shipped to the Land Down Undaa. The demand is needed though as Canadian non-durum wheat exports continue to track behind last year’s pace. 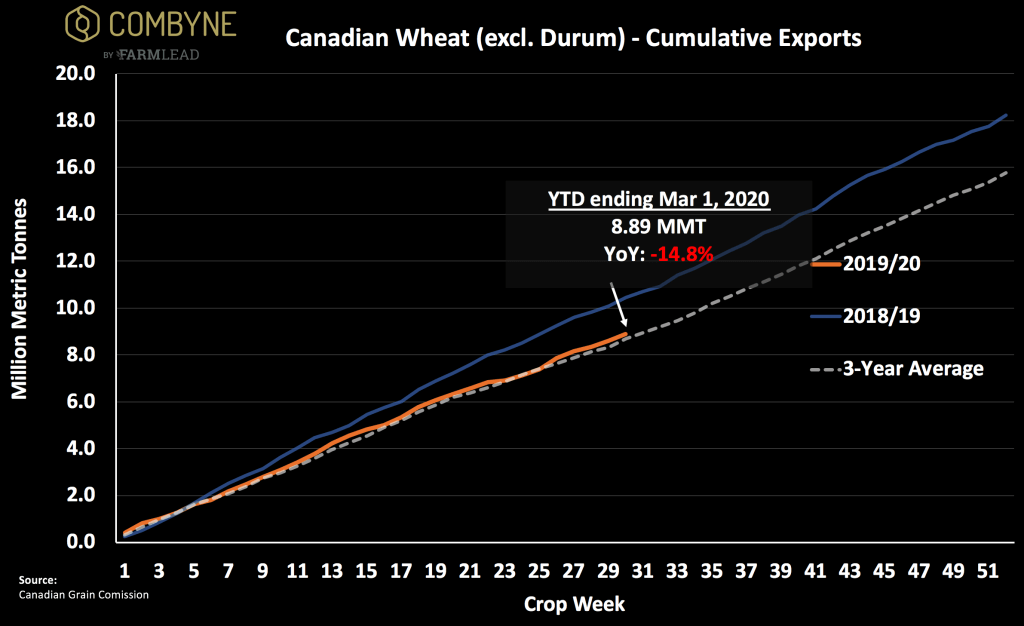 Comparably, where the 2020 wheat harvest looks relatively strong is in the Black Sea. In Russia, total grain production in 2020 should exceed 125 MMT according to Russia estimates, including the second-largest wheat harvest ever in Russia of 77 MMT (the record was set in 2017/18 with 85.2 MMT combined).  Next door, the government’s expectations are to see its winter wheat harvest fall about 5 MMT YoY to 23 MMT and, like Russia, some moisture would help the crop today. Further, total grain exports could pull back from the expected 52 – 55 MMT for the 2019/20 crop year, to 40 – 45 MMT in 2020/21.

This past week’s export sales report from the USDA was fairly bearish for soybean prices, with soybean exports sales totalling just 346,400 MT, versus expectations of 500,000 MT to 1 MMT. Further, despite the U.S.-China trade deal coming into effect in mid-February, they haven’t really increased their interest in U.S. soybean exports with sales last week being their weakest since early September. To date, American soybean exports sales to China so far in the 2020 calendar year have totaled just 1.13 MMT, which is well below the 2.83 MMT bought back in 2017, before the trade war started. That said, U.S. soybean exports so far in 2019/20 are tracking 12% better year-over-year. 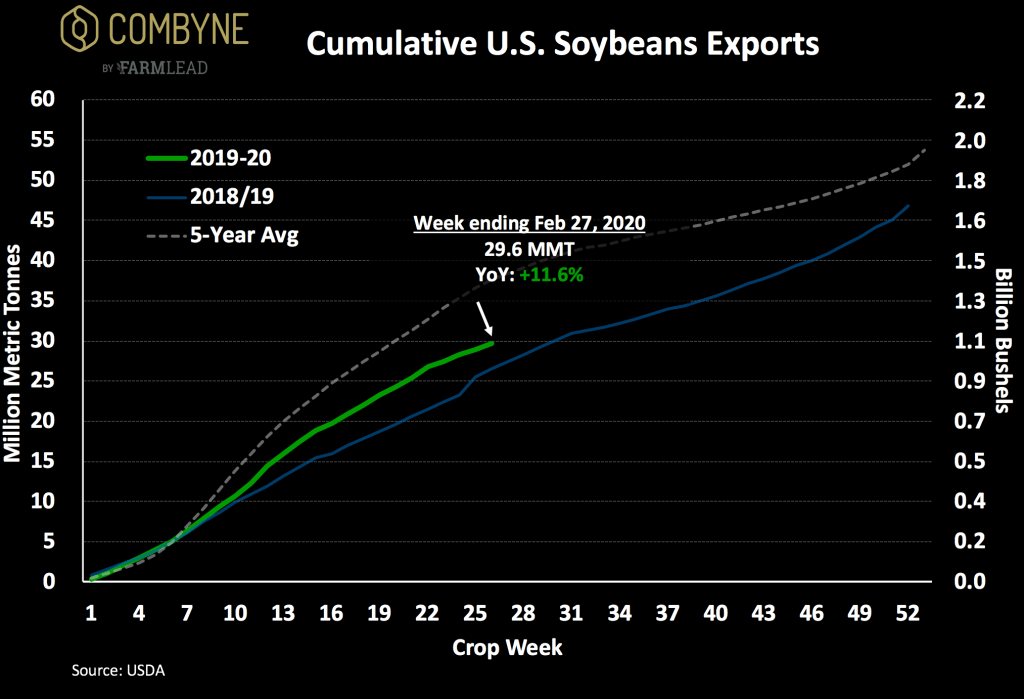 However, one of the headlines that’s supporting soybean prices a bit is that China is granting one-year tariff exemptions for some of its crushers on imported U.S. soybeans, wheat, and DDGs. As a reminder, as of February 14th, Chinese tariffs on U.S. soybean exports was 27.5%, making American beans relatively uncompetitive with that which is being shipped out of Brazil.

Speaking of Brazil, some dry weather has slowed down the soybean harvest, with roughly 40% of the crop in the bin, compared to 45% at this time a year ago. Mato Grosso, Brazil’s top soybean-producing state, about 80% of the soybean harvest is complete, will above the seasonal average of 63%. Conversely though, farmers in central and southern states are well behind what they were a year ago as dry weather throughout the growing season has not only stunted growth, but also delayed the growing timeline a bit. For example, farmers in Rio Grande de Sul are just getting their soybean harvest started and some expectations are that yields could fall by 15% year-over-year.

Production aside, the bigger issue Argentine farmers are dealing with is higher export taxes. To deal with its $100B USD of sovereign debt, the Argentina government raised its taxes on soybean exports by 3% (or 300 basis points) to 33%, albeit this only applies to farmers in the country to combined more than 1,000 MT last year. 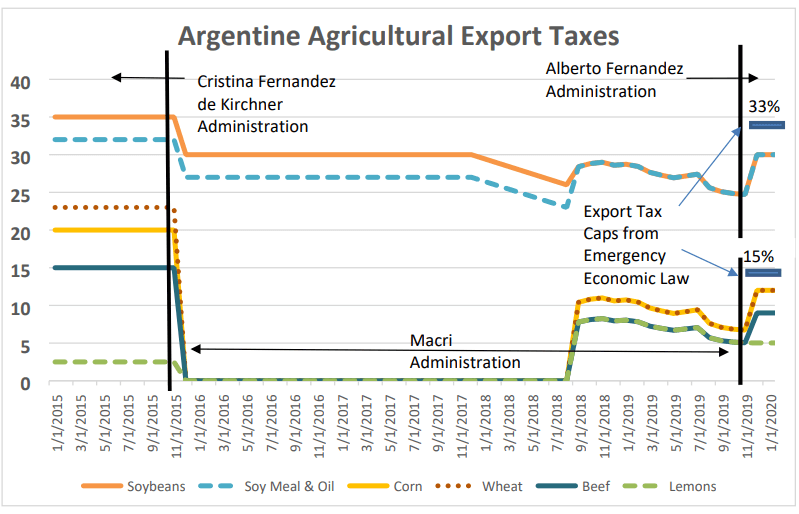 For those who harvested less, there are 5 further tax brackets, with those who took off less than 100 MT in last year’s soybean harvest only having to pay 20%. For context, 77% of Argentina’s soybean harvest is taken off by about one-quarters of the nation’s farmers. Farm consultancy AgriPac, is estimating that impact won’t be felt in the 2020 soybean harvest, but in 2021, as they’ve already reduced their estimate by 3 MMT on 2.5M less acres planted.

Coming home, railroad movement of Canadian grain is starting to get back to normal after the past few weeks of climate protests. CN Railway CEO Jean-Jacques Ruest admitted that roughly 1 MMT, or about 10,000 carloads of grain capacity were lost during the protests and that “of all the supply chains, the one that will take the longest (to recover) is the grain.” Much like the markets, I’m optimistic that we’re at the bottom of the rail issues too for the short-term.