For many of the commodity futures in meats and grains, it has been a very rough two weeks of panic selling in response to coronavirus economic impacts.

The sell-off has not been isolated to agricultural commodities, as the equity market in the U.S. is now officially in a bear market and down 20% off of the highs. Based on economic concerns and a tit-for-tat between Russia and Saudi Arabia, oil prices have plunged in the last week. Last week, the Bank of Canada lowered its key rate 50 basis-points to 1.25% with strong speculation among analysts that more cuts are coming.

Add all of this together, and concerns over the value of the Canadian dollar have pushed the petro-currency lower by 2.55 cents (-3.40%) to $0.725 in the last month. 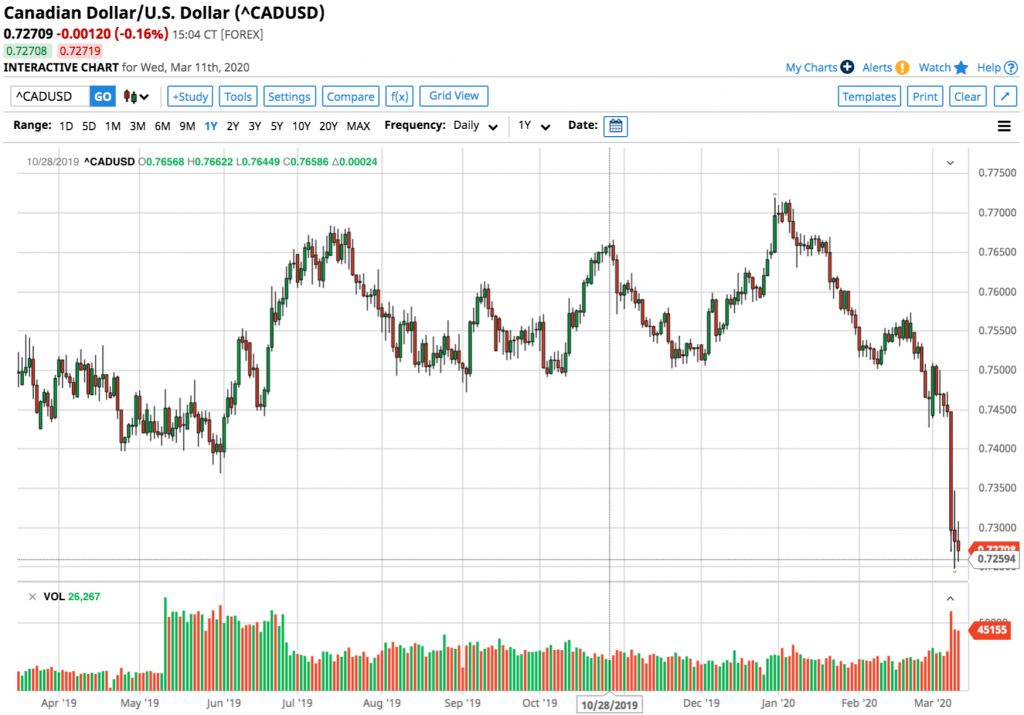 For many producers in the exportable commodities, hedging the Canadian dollar is a highly important component of any marketing program. At this point, the question of when to apply any new hedges is very difficult given the unknown uncontrollable variables impacting this market right now.

Earlier this week Goldman Sachs predicted that oil prices could eventually trade into the $20s which would likely push the Canadian dollar to the upper sixty cent range according to a couple analysts I spoke with. Since it is hanging barely in the low 30s now, this does not seem to be an easily dismissed scenario.

If you have your Canadian dollars hedged without locking in your commodity price you are likely dealing with some regrets based on the trading action of hogs, cattle, and soybeans (to name a few) recently.

For unhedged dollars still out there, the decision is riddled with thoughts of calling the bottom which can be bogged down with “shoulda, coulda, woulda.” If you expand the chart above to a five year chart, some hedgers may start to wonder if a trigger point is the five year low of $0.68081.

Similar to when you are selling into a rally on commodities, buying Canadian dollars on the way down may be the prudent plan in this kind of market to avoid an increasingly greedy strategy that turns against you.