Grain markets were mixed to end the third week of March with oilseeds and wheat finding strong gains near its end while corn and oats couldn’t recover deep losses earlier in the week. In the broader markets, U.S. stocks had their worst week since 2008, with the Dow losing 17.3 per cent, the S&P 500 down 15 per cent, and the Nasdaq dropping 12.6 per cent.

Corn mitigated its losses from earlier in the week thanks to a positive export sales report, namely the 756,000 MT sold to China. This is the largest single purchase of U.S. corn by the Chinese since July 2013, so needless to say, in a sea of woeful demand news, it was welcome. That said, those negative undertones are likely to keep corn prices in check and could further by pressured by a big 2020 U.S. corn crop.

Currently, private estimates of how many corn acres in the U.S. we’ll see are ranging between 94 and 95 million acres (90 million acres were planted in 2019). That may change depending on how intense or widespread the COVID-19 quarantines are, and ADM says that when it comes to fertilizer supply (and prices) all eyes will be on the U.S. river system. While I’m still optimistic, I’m not holding my breath that the USDA will release their Prospective Plantings report on March 31 st, as planned. From a weather standpoint, while yesterday was technically the first official day of spring, there are some winter storms hitting the eastern Cornbelt and Northern Plains. The bad news is that the NOAA, in their spring outlook this past week, suggested that there’s an increased chance of major flooding, this spring, which will intuitively challenge Plant 2020 progress. However, the NOOA is also forecasting that no part of the U.S. will have below-average temperatures this spring, so hopefully, the sun does its job of helping dry out some fields. The opposite is expected for Western Canada until at least until
May, with big swings in temperatures and limited precipitation expected until then. 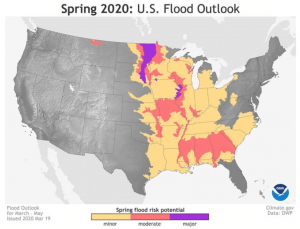 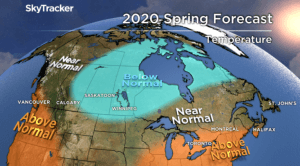 On the other side of the world, some untimely rains and hail damage will have a negative impact on India’s rabi winter crop, namely pulses, wheat, and rapeseed. As I said last week, pea prices will be watching India closely and if the quality of the chickpea crop doesn’t meet requirements of India’s buyers, they’ll likely be looking to source elsewhere. Since yellow peas are a strong substitute for chickpeas, this could be a positive price event and might be an indicator of a small rebound in pea prices.

Wheat prices gained back some ground this week as demand for food staples like bread, flour, crackers, and pasta have all soared with nearly all North America in lockdown mode. In Europe, the rain has limited spring sowing in a few countries, namely France, as wet fields been less spring barley planting is way behind its normal pace (34 per cent complete this past week vs the five-year average of 96 per cent). Continued strong export sales also helped push wheat higher. For the current crop year, the total U.S. wheat exports are tracking 10 per cent higher through Week 41, when compared to 2018/19. 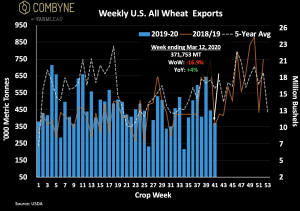 Most can agree that demand for food has spiked as people look to stock their fridges and freezers for at least a few weeks of isolation. With the shelves of staples such as rice, oatmeal, canned beans (including chickpeas), and pasta looking pretty thin, the processing companies of these foodstuffs will have to work hard to fill the pipeline. That said, durum prices are finding some new highs on what’s likely some speculative buying on the expected increased demand. 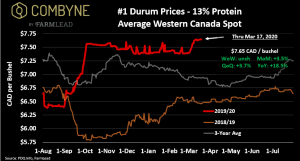 Keep in mind as well that, with Italy being hit with coronavirus so hard, Italian goods (i.e. pasta) are likely not in as high demand around the world as they once were. While it’s inherently hard to estimate what this surge in demand looks like, durum prices are also contending stronger demand. it will have some serious competition with international demand as shipments picked up the pace at this time a year ago, especially from Canada.

So, when will we see normal again, be it in the markets or our daily lives? The reality is that the market will not stop being so volatile until either the rate of new COVID-19 cases in the world starts to level off, or the market believes that all this government liquidity is enough to keep the economy going. We’re also starting to see more governments looking into boosting the oil market, which has helped oil prices pick up a bit from earlier this week when they hit their lowest levels since 2002. That said, you should be locking up fuel supplies now for this year and next. Are you really willing to bet on another $5 or $10/barrel drop in oil prices when they’ve already fallen by $40 in the past 2.5 months?!

Overall, the current situation just sucks. All politics aside, we can’t go back and change what’s happened; we can only move forward. Given the economic downturn that is happening, those of us who are still in the workforce have a much greater responsibility to get things going again. The greatest error to be made right now for you, for your family, for your community, and our economy, is to be paralyzed by fear and not move yourself forward. Yes, our humanity is being tested but this has been seen before. Past generations have, as one, rose to the occasion; have collectively struggled and emerged victorious. It’s our time in history to do the same.

Keep your chin up and have a great weekend!