Grain markets found green again to end the last full trading week of March as capital inflows into the space and demand for essential foodstuffs remains strong. That said, only wheat had a positive day on Friday as the rest of the complex and broader equity markets saw a sell-off. The Canadian Loonie finished the week strong to close back up above 71.5 cents USD (after scratching 68 cents on March 19th) and so this has put some pressure on Canadian cash grain markets.

To state the obvious, COVID-19 continues to consume all headlines and the situation remains very fluid as governments are trying to react in near real-time. The U.S. has now become the country with the most cases of COVID-19, passing China’s “official” numbers (but honestly, do you believe them?). Michigan alone now has nearly more cases than Canada, and already more COVID-19 deaths, but New York City is the epicentre with one doctor saying “9/11 was nothing compared to this.” Even U.K. Prime Minister Boris Johnson has tested positive for COVID-19.

With a large portion of the developed world in lockdown, oil markets continue to be at multi-decade lows and this will likely have a direct impact on grain markets and more specifically corn. Next week on March 31st we’re supposed to get the UDSA’s Prospective Plantings estimates but market participants are already starting to discount any corn acreage number that USDA puts forward. With gasoline demand in the U.S. down 70% – 80% in just the past week, this means that there intuitively will be less ethanol needed.

Currently, pre-report estimates suggest that the USDA will show American farmers plan to plant 94.1M acres of corn, 85M acres of soybeans, and 45M acres of all types of wheat. For perspective, these pre-report estimates almost exactly match what the USDA said in their February outlook forum and would be up 5% for corn and 12% for soybeans. That said, with corn-for-ethanol demand dropping significantly with anywhere from 2 to 5 billion gallons of ethanol production going offline, it’s certainly possible that less corn gets planted. Something to consider though is that, in the past, American farmers have tended to almost always plant a crop, even when demand – and thus prices – were poor.

In Western Canada, the story may be a little different where a bump in demand for food products made from cereals and pulses is helping cash prices. Obviously, the spike in demand caused by panic-buying could be short-lived. However, sustained demand for food stapes may be more likely when considering the 2-3 months that governments are softly suggesting this COVID-19 lock down could last.

If that’s the case, we might see a few more acres of oilseeds switch over into cereals or pulses. That said, for agronomy reasons, this might not be the best play. Further (and a bit ironically), canola exports switched from pacing behind last year to now getting in front of it, thanks to 335,400 MT sailed this week, the 2nd-largest one-week shipment in 2019/20. Now, through Week 33, 6.1 MMT of Canadian canola has been exported, up 1.3% year-over-year. 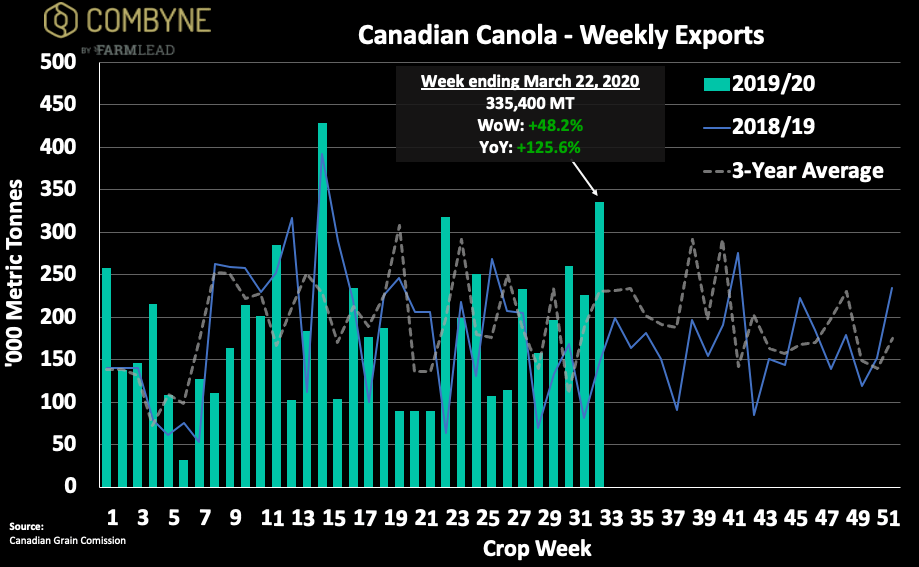 Comparably, through Week 29, U.S. soybean exports are tracking only 7% above last year with 31.3 MMT sailed. Why is this bearish? Just a few weeks ago, 2019/20 American soybean exports were tracking as high as 40% above 2018/19. The slowdown is largely because the Brazilian crop is making its way to ports and onto boats head for Asia. This week, soymeal in China’s futures commodity exchange in Dalian went limit up as domestic supplies are tight and they’re trying to rebuild their pig herd. That said, it appears likely that Brazil will hit a new record of soybean exports this month, surpassing the 9MMT record for March set back in 2017. 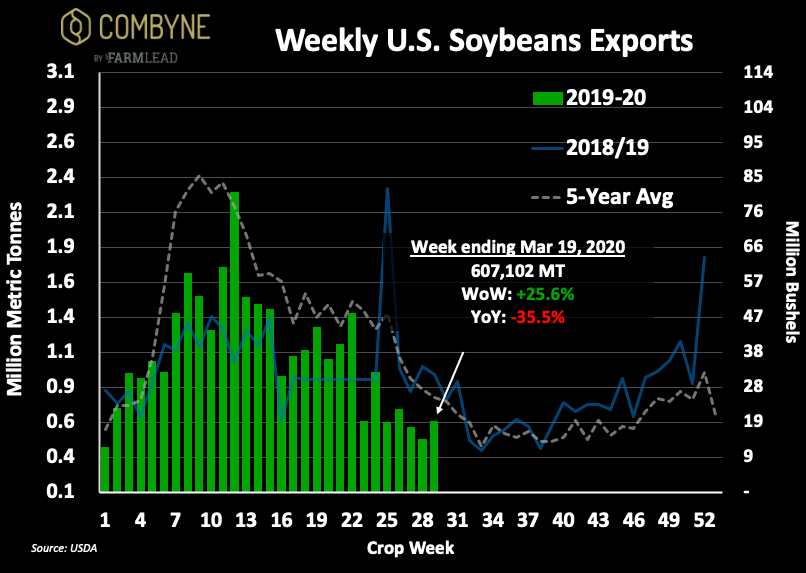 With COVID-19 hitting North American and European ports (and thus closing) just as Asian ports are opening back up, how grain trade flows over the next few months will be really interesting. For densely populated countries that are going into lockdowns like India, there’s immediate food security concerns that come to mind. While officials in India say that there’s about a year’s worth of food supply (especially with the winter rabi crop coming off as we speak), any concerns about ensuring people can eat will fall on logistics and supply chain challenges.

If there are any food shortages in India from heightened demand breaking weak supply chains, you should absolutely expect some sort of social revolt. Already, global trade for agricultural commodities is being tested as countries start to hoard food, providing a new level of populist protectionism we haven’t yet experienced. For example, Vietnam has suspended new rice export contracts until further notice while Kazakhstan has banned all exports of carrots, sugar, potatoes, and wheat flour (despite being one of the world’s largest flour shippers). And in Ukraine, millers there have asked its governments to limit flour exports going forward or else risk a surge in bread prices.

My next best guess is that this sort of behaviour is just the tip of the iceberg and it might lead to war-time rationing and price controls for food in many countries. I’m not necessarily expecting that in Canada or the U.S. but an alarming move was to see the B.C. provincial government already granted itself emergency powers this week, which would allow them to take over supply chains. This is something I staunchly disagree with given that they’re not exactly supply chain experts. Opinions aside, my point is the governments could become even more protectionist that what we’ve seen over past 3 or so years.

The good news that they should all understand is that there is still a lot of grain in the world – especially wheat. The International Grains Council monthly outlook was well-timed as they also reminded us that there’s expected to be record food production in 2020, including 1.16 billion MT of corn (+40 MMT year-over-year) and 768 MMT of wheat (+5 MMT).

If you’re looking for some explicit grain marketing advice right now, low-protein milling wheat is testing its highs seen in January, which is exactly what I would consider to be a sell signal. I’m not saying sell or forward contract every bushel and acre, but getting some cashflow on the books is never a bad idea (especially in the current credit fiasco!).