Manitoba’s government has revived its plan for a flat $25/tonne carbon tax, which will coincide with a one per cent drop in the provincial sales tax (PST) to take effect on July 1st.

Premier Brian Pallister made the surprise announcement, referring to the carbon tax as a “Green Levy,” on Thursday — a few days before the province’s 2020 budget release on March 11.

It’s not clear yet why Manitoba’s Progressive Conservative government feels the federal Liberals will approve the province’s $25/tonne levy this time around — or whether Ottawa will just top up the provincial amount, but Pallister says they plan to move ahead this summer.

“Unfortunately, the federal government ignored our request to work together as a true partner in tackling climate change, so we have no choice but to act now to protect Manitobans from the rising federal government carbon tax they are bringing in this year,” says the premier, in a news release. “Ottawa has provided special exceptions and exemptions to many other provinces but refused to consider Manitoba’s significant clean hydro investments.”

Pallister is pitching it as an opportunity for the federal government to cooperate with a western province on carbon pricing.

“Manitoba has offered to be a bridge between east and west on climate and carbon and that offer still stands,” he says. “Working with us should not be a bridge too far for the federal government.”

Unlike the federal tax, the provincial levy will not apply to fuels used for drying grain and heating barns and greenhouses. Farm fuels used for machinery are exempt under both frameworks.

According to the premier, dropping the PST to six per cent will save Manitobans $325 million annually — $40 million more than what the province expects to collect from the “Green Levy.”

The vice-president of  Manitoba’s general farm group has a mixed reaction to the carbon tax and PST plan.

“Keystone Agricultural Producers (KAP) members have overwhelmingly called on governments to exempt the costs of heating barns and drying grain from any carbon tax framework, given the fact that farmers must do these things to successfully manage their operations. We have been supportive of the province’s intention to exempt those costs under its provincial levy,” notes Jake Ayre, who farms near Minto, Man. “We have been supportive of using revenue for on-farm projects that will benefit farmers in their role as environmental stewards. A reduction in the provincial sales tax, however, will not have the same benefit to farmers.”

The lack of clarity around how the carbon tax will be applied and enforced is also a problem, says Ayre:

“We are concerned about a move towards an unclear tax structure at a time when farmers are already dealing with seemingly unprecedented uncertainty across their operations. The administration of a federal-provincial carbon tax structure will create additional red tape when it comes to how farmers interact with government, and we know from our own work that separating the carbon tax charges from natural gas and propane bills is not a straightforward process.”

The Manitoba government is also fighting the federal carbon tax in Federal Court, and has intervener status in Saskatchewan’s court challenge, which is scheduled to be heard by the Supreme Court of Canada on March 24. 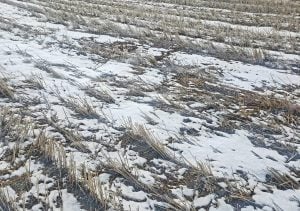 Wheat Pete’s Word, Feb 24: Attention to detail, getting wheat in the ground, and more clover questions

Congratulations again to Peter "Wheat Pete" Johnson on being named one of the Top 50 in Ag under the Mentor category. Of course, part of why Pete's such a great mentor is his valuable, regular contribution to RealAgriculture, including Wheat Pete's Word! On this weeks' edition of the Word, our host answers hairy vetch and…Read more »

$15.5 million beef research centre to be built at Elora, Ont.