Despite a positive performance on Friday, grain markets ended the past week in the red as traders booked profits and farmers made sales, amidst different supply and demand signals. Buzz around how economies are going to start up is shaking up this panic-buying demand that have hung over markets. Also complicating things this past week was the shutdown of a lot of livestock processing plants across North America.

We’ve been in a state of COVID-19 lockdown for over a month in most places now…shouldn’t we have some of this figured out? Why haven’t there been new food security councils created amongst players within the food industry? Obviously, the answer is more complicated that just a snap of the fingers. We can’t just move all the demand from the hospitality/food services line item to the retail line item overnight. Rabobank has done some interesting analysis, calculating that for every 10% drop in food services demand, retail demand only goes up about 3%! Quite clearly, we know that it’s not an exact trade-off of shifting supplies from one column to the other.

That said, the U.S. government is looking to buy foodstuffs as part of the $15.5B USD in agricultural industry aid announced earlier this week. More specifically, Ag Secretary Sonny Purdue said on Wednesday, “We want to purchase as much of this milk, or other protein products, hams and pork products, and move them into where they can be utilized in our food banks, or possibly even into international humanitarian aid.”

Nothing similar has even been rumoured from the Canadian government. Accordingly, Manitoba’s farmers association, KAP, made calls this week for the Canadian government to step and provide a better playbook for the country’s food security. Further, the Canadian agricultural industry and government should be asking how they can ensure taking advantage of a potential export boom of foodstuffs as other countries move to more protectionist policies/food export quotas.

Speaking of exports, Russia, the world’s largest wheat exporter, said that, once their export quota is met (likely before mid-May), they’ll restrict all outbound shipments and focus wholly on supplying its domestic market. Further, complicating things for the wheat market was Egypt. The world’s largest wheat buyer bought less than the market was expecting, and a at price that means U.S. low protein wheat is probably still too expensive for them. Even further bearish news for wheat prices is that 62% of the winter wheat crop was rated in good-to-excellent condition last week, meaning it’s doing pretty good. That may change in Monday’s crop progress report from the USDA after the last few days of cooler weather.

Conversely, international durum demand continues to be very strong with Canadian and U.S. exports tracking 29% and 75% higher year-over-year, respectively. Accordingly, spot durum prices are sitting at levels not seen in 3.5 years but quality discounts and agronomic challenges are making HRS wheat look like the better option for more than a few wheat farmers this Plant 2020. However, with the Canadian Loonie poised to head lower (namely because of lower oil prices and recession signals), Canadian durum exports are likely to continue to see this trend of strong shipments. This is also helping draw down stocks after a few good years of production in North America. 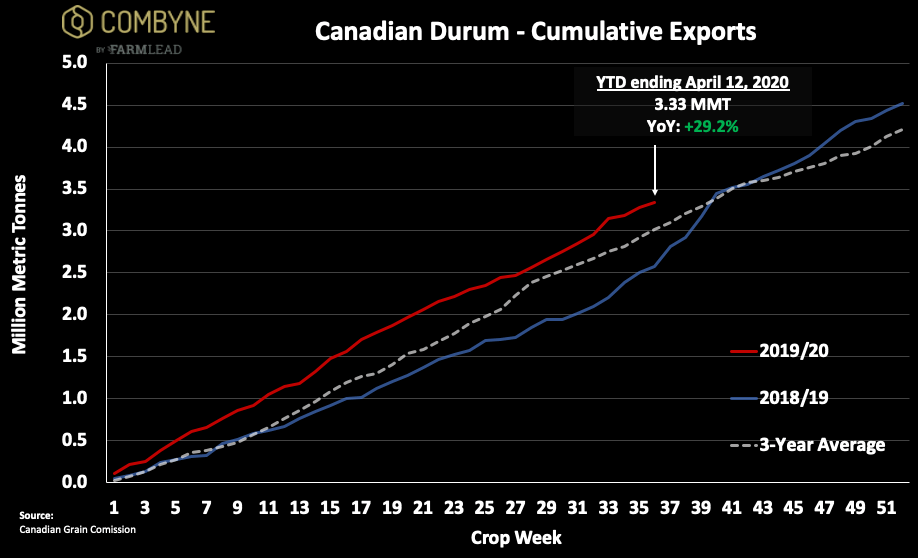 Where currency is playing an even greater role in the grain exports game is in Brazil. Thanks to the significant depreciation of the Brazilian Real currency, domestic Brazilian corn prices are sitting at record highs (same with soybeans, wheat, and other ag commodities). Considering that Brazil sets the tone these days for global corn exports, this is a pretty significant and credible warning from CONAB, who said that the high prices in Brazil could make cheaper corn in the U.S. more attractive to international buyers.

That said, U.S. corn could use a good demand story and the way exports are tracking, they might be in luck. The past 3 weeks have the largest one-week shipments all crop year, and by a long-shot (see chart below). That said, through Week 32 of the 2019/20 crop year, U.S. corn exports are now tracking 33% behind last year with 20.82 MMT shipped out through Week 32 (or nearly 820M bushels if converting metric tonnes into bushels). 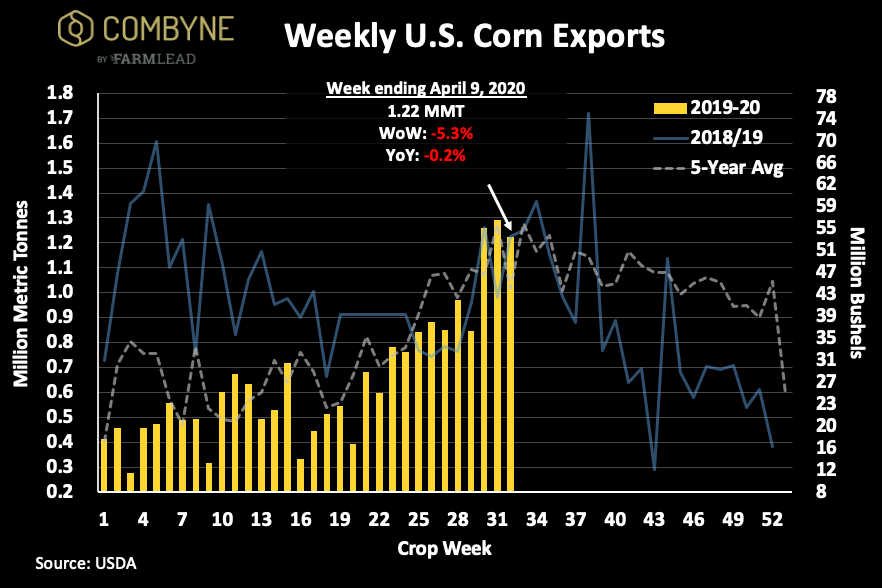 Why does U.S. corn need help? Ethanol production in the U.S. last week hit a record low volume of just 570,000 barrels per day. This is down 44% year-over-year and 15% from the previous all-time low, which was set just the week before! Unsurprisingly, ethanol stocks in the U.S. climbed to another new record of just under 27.5M barrels. We also know that with U.S. ethanol facilities slowing down production, this is putting some serious negative pressure on corn prices.

Further, there’s been an obvious reduction in DDG output, which is having its own negative impact on feedstuffs for livestock operations. In line with this, we continue to see strong demand for feedstuffs on our 100% free Combyne cash grain marketplace for not only old crop, but also new crop. P.S. We just added a hay and straw component to Combyne marketplace, so if you’re looking to sell or buy forage products, Combyne has you covered there too!

To end this week’s grain markets round-up, I wanted to share that I’ve been getting a lot of calls from producers who are thinking about switching up a field or two before seeding begins. I’m generally okay with that, but I’ve reminded them (and now you) that this might be more of a year to focus on best agronomic practices and controlling costs of production.

On the downside, I have some bearish concerns for corn, canola, and soybeans heading into Plant 2020. We all know that corn demand has lost a lot of lustre with the ethanol industry slowing its processing to a near standstill and with U.S. acres coming in likely somewhere between 94 and 97M, this would be a very big crop at trendline yields. For the oilseeds, there’s a double-whammy of demand destruction that we’re potentially facing. First, is the lower demand for cooking oils from restaurants around the world. The second is that with meat demand somewhat set now at a new, lower level because of the lack of needs from the global hospitality industry, this potentially means less animals, which means less demand for feedstuffs (like canola meal or soymeal) overall.

That said, given the current COVID-19 environment, I think that oats, durum, and wheat in general are going to do well. For oats, this new lockdown paradigm and a recession that could last 2 years means breakfast is likely going to be on more of a budget. This means more inexpensive staples, such as oatmeal and to meet the market’s requirements, quality has become increasingly more important. For wheat, despite the record amount of wheat still available in the world, and a record harvest 2020 pending, demand is up, and export restrictions have kept the market on edge. While I’m not expecting to see 2008, 2012, or 2016 wheat prices this year, I think 2020/21 crop year prices could be up 10-15% than 2019/20. Of course, final acres and Mother Nature will have the final say!

I’m also expecting some strong demand for pulses. This sentiment is shared by my friend Chuck Penner of Left Field Commodity Research who told Real Agriculture this week that it’s not just old crop prices for pulses that are improving, but new crop pries as well. For example, new crop small red lentil prices are sitting around 28¢ CAD/lbs in Western Canada (higher/lower depending on the area) while this past week, we saw some yellow pea prices trade at $8/bushel on the Combyne cash grain marketplace! 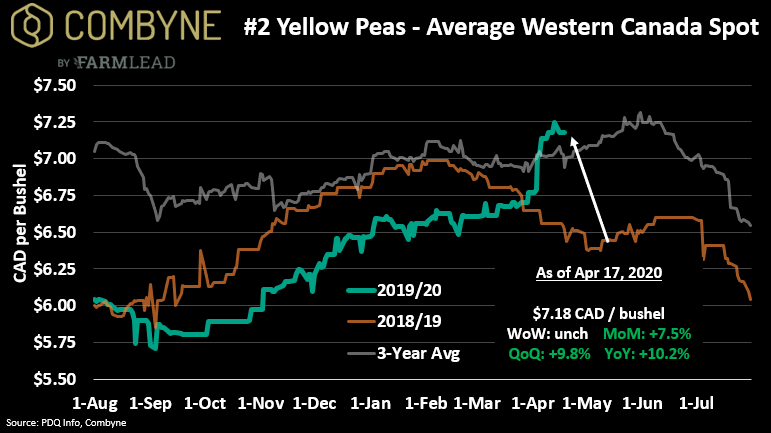