Grain markets closed mostly lower to start April off, as the highs seen last week gave way to some profit-taking and farmer selling. We saw said selling firsthand on the Combyne cash grain marketplace as buyers were able to take advantage of the weaker Canadian Loonie and shore up some coverage before fertilizer deliveries make freight more expensive.

From a monthly standpoint, wheat and canola futures had a solid March, reaching up near the highs seen in January. Canola got some excitement this week as there were reports that China was re-opening the flow of all
Canadian canola exports. However, the official word from the Canola Council of Canada is that canola exports to China are continuing as normal, but that licenses for Richardson and Viterra remain suspended. Just last week,
canola exports did surpass the volume seen a year ago, with 6.32 MMT in total sailings through the end of March. 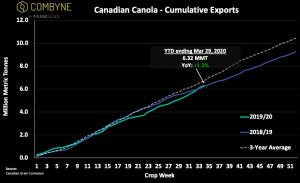 Conversely, corn and soybeans took their hits, with more than half of corn’s massive 14 per cent loss for the quarter being accumulated in March alone. The big hit that corn took this week though was in the form of estimated acres for Plant 2020 by the USDA coming in at a massive 97 million! Overall, there were a lot of moving parts to the grain markets this past week and so it’s bit tough to try and squeeze everything in here but we’ll try!

WTI and Brent oil prices were the commodity winners for the week, up 35 per cent and 39 per cent respectively, on expectations of lower global production. A Thursday tweet from U.S. President Trump suggested that, after talking with the Crown Prince, MBS, of Saudi Arabia, they and Russia would cut production by 10 -15 million barrels per day.

Ironically, the Saudis and Russians said that they had never talked but the oil market didn’t care, because the U.S. intervening was considered bullish. That said, there are now reports are surfacing that OPEC has called an
emergency meeting for Monday to agree on production cuts, which is continuing to support oil prices this morning. Despite the bullish buzz in oil markets yesterday, soybean oil prices are remaining near 13-year lows. The bottom line is that, even with U.S. soybean oil exports hitting 2019/20 marketing year high last week, it’s just a very difficult environment to rally. Why? With less vegetable oils needed at restaurants around the world, the demand function remains the biggest cloud hovering over the edible oils market. For our Western Canadian readers, this intuitively means less demand for canola oil (although I’ll admit, it’s not like edible oil demand has NOT tanked like oil demand has!).

On a related note, U.S. ethanol production fell last week to its lowest level since September 2013 with 840,000 barrels/day produced last week, a drop of 165,000 bpd week-over-week and 159,000 bpd year-over-year. The
ethanol demand buzz isn’t that much different in another major ethanol-producing country: Brazil. This week, 2 of Brazil’s largest fuel distributors declared “force majeure” on their ethanol purchases as nearby demand dropped by more than 50% in one week.

With the drop in demand, there continues to be a lot of apprehension as to just how many corn acres will get seeded in the U.S. this spring. Going into this past Tuesday’s Prospective Plantings report from the USDA, the
market was expecting see 94.1M acres of corn, 85M acres of soybeans, and 45M acres of total wheat. However, in the Prospective Plantings report, the USDA said American farmers will plant 97M acres of corn (+8% or 7.3M acres year-over-year), 83.5M acres of soybeans (+10% or 7.4M acres), and 44.7M acres of total wheat (-1%, or 503,000 acres).

Alongside the Prospective Plantings report, the USDA also released its quarterly stocks estimates as of March 1st. In it, the USDA said that U.S. corn inventories totaled 7.95 billion bushels (or 201.9 MMT if converting bushels to metric tonnes) which would be down 8 per cent year-over-year and 180M bushels below what grain markets were expecting to see. For soybeans, the USDA said there was still 2.25 billion bushels in the pipeline (or 61.2 MMT), a 17 per cent drop from a year ago, but it pretty much matched pre-report expectations. Finally, wheat supplies totalled just 1.14 billion bushels (or 31 MMT), down 11% from last year and nearly 300M bushels below what analysts were expecting. Ultimately, these numbers suggest that based on-demand usage, the USDA may have overestimated the size of the U.S. 2019 crop.

One crop that we saw jump this week in the cash markets was lentils, for both new and old-crop contracts. This move by lentil prices has been largely speculative though as there continues to be concern over the rabi winter
pulses harvest in India. as well as countries securing food supplies while they can. In India, with labourers heading back to their village during the 21-day quarantine, there are serious fears of not only the ability to get the crop off, but also clean/process it, and take it to market. Obviously, this creates supply concerns, which push lentil prices (and that of other pulses) up a bit.

In Western Canada, red lentil prices have made a more pronounced rally than green lentil prices, but we did see consistent trading this week on Combyne between 27? and 30 ? per pound. Technically, this is lagging behind
2019/20’s largest one-week shipments of Canadian lentils, but through Week 34, total lentil exports from the Great White North are tracking 162 per cent higher year-over-year with nearly 650,000 MT sailed from licensed exporters. 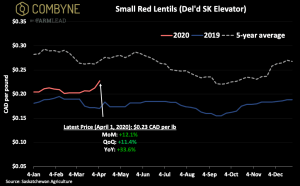 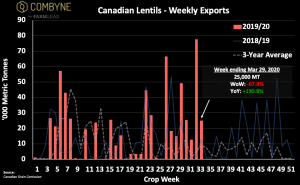 Thinking beyond just the grain markets, the spread of COVID-19 has brought societies and economies to a near halt. In Thursday’s U.S. jobs report, a record 6.6M Americans filed for unemployment benefits last week, double the 3.3M who applied the week before. That means that roughly 6% of the entire American labour force in the U.S. is back on the unemployed sidelines in just the last few weeks. A recent Focus Economics survey suggested that we’re likely to see at least two-quarters of economic contraction (read: recession) but the downside is uncertain as it’s hard to estimate the impact of global containment measures and the effectiveness of stimulus packages.

Quite simply, asking over and over again, “when is this going to end?” does nothing for you, your family, or anyone’s mental tolerance for this new normal. It’s our family, in close proximity at all times, and this COVID-19
lockdown couldn’t end soon enough. But, there’s one simple word to trick your mind into reserving, and that’s replacing “I have to” with “I get to” spend time with my family; “I get to” have breakfast, lunch, and dinner with my
family; etc.. When you take this perspective, it grounds you and keeps you in the present. Try it out!

El Nino, Wheat and Russian Rubles — This Week in the Grain Markets

Gaining Ground — This Week in the Grain Markets