Grain markets headed into the U.S. Memorial Day long weekend with a bit of a limp as traders watched technicals for direction amidst some benign crop conditions and a firmer U.S. Dollar. Wheat prices on Friday pared their gains made over three straight positive sessions, despite a smaller crop in Kansas expected and some short-covering on the Minneapolis HRS wheat board. The bigger issue impacting not just grain markets, but all markets, is building tensions between the U.S. and China, with the latter laying down some very heavy-handed anti-democratic laws in the city-state of Hong Kong.

While positive news of a COVID-19 vaccine consumed investors earlier in the week, more focus is building on the emerging “New Cold War” between China and the United States. Trust between the two superpowers is the lowest its been in over 40 years, but a new low was reached yesterday when China announced that it would introduce new laws that is supposedly directed at curbing “secession, sedition, foreign interference, and terrorism.” One Hong Kong pro-democracy politician called the bill “the end of Hong Kong”; another called yesterday the “saddest day in Hong Kong history.”

In response, the U.S. government is reviewing new legislation that would impose some serious restrictions on Chinese companies that already are or are trying to list on American stock exchanges. Further, new legislation was introduced to the U.S. Senate that would punish ANY Chinese company or organization that is involved in enforcing China’s proposed rules of law in Hong Kong, which has been an autonomous city-state since Britain gave it up in 1997. Fights have literally broken out in recent weeks at Hong Kong’s Legislative Council. I don’t know how else to categorize this other calling it political terrorism as one of the world’s largest independent cities loses its freedom.

Ultimately, it’s becoming increasingly clear that China wants to dominate the world. That said, it’s tough to navigate this challenge of communism trying to take over the world when China and its citizens are, collectively, the world’s largest commodity consumer. That said, it is certainly early, but it appears that China is working on buying more U.S. commodities in order to meet the trade deal obligations signed back in January!

In fact, over the past 10 weeks since the trade deal was signed, U.S. corn and export sales are about 8 times higher when compared to pre-trade war volumes in 2017 over the same period. Similarly, U.S. soybean exports are tracking roughly 3 times higher. Conversely though, China has decided to go away with its annual growth target as their own economy suffers the fallout of COVID-19, meaning there isn’t a lot of demand for other raw materials. 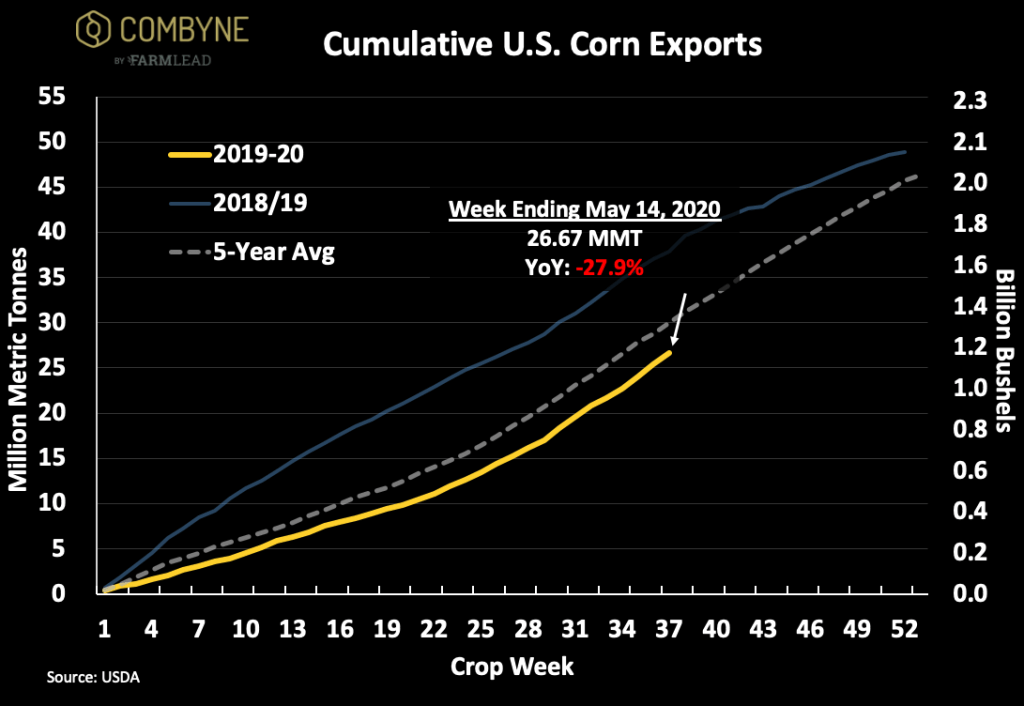 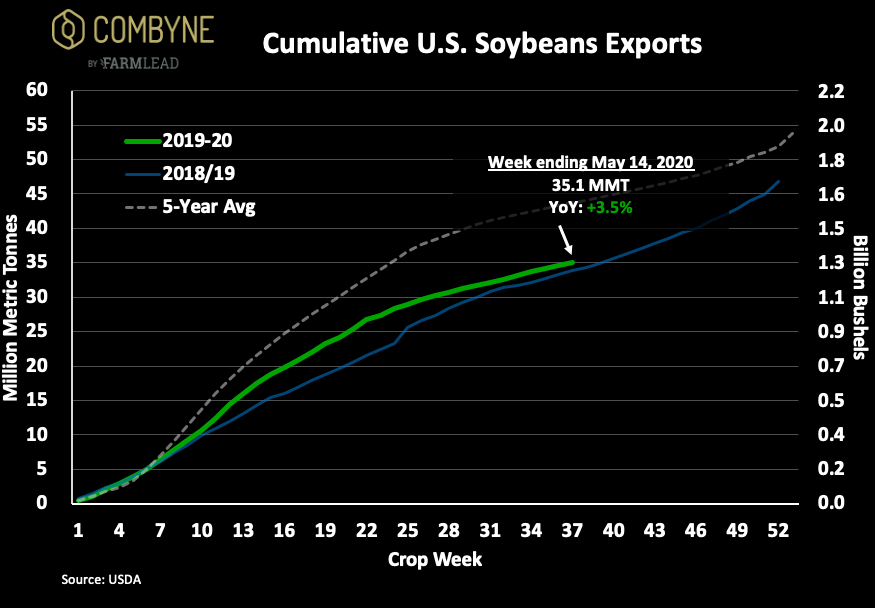 What China certainly doesn’t want more of is Australian barley and meat! China has effectively banned beef imports from 4 of Australia’s largest meat processors, citing issues with labeling and health certificates as the reason. Further, China is immediately implementing an 80.5% tariff on Australian barley exports to the People’s Republic due to “anti-dumping”.

But let’s call it what it is: a political response to the Australian Prime Minister calling for an independent investigation into the handling of COVID-19 in the early days by the Chinese government and the World Health Organization (the W.H.O.). The tariffs on Aussie barley exports to China are set to last 5 years and while Australia sends about 3.5 MMT of malt barley to China annually, they could send more malted product, but their domestic capacity tops out about 1.2 MMT of barley which converts into 1 MMT of malt.

Put another way, with this tariff, Australian barley will likely be priced out of the market. This obviously opens the door for other countries like Canada, the U.S., Ukraine, France, and the Black Sea to ship more barley to the People’s Republic (check out my outlook on barley prices from a few weeks ago. That said, China has thrown U.S. and Canadian agriculture under the bus many times when there are political disagreements and the impact is obvious. It’s not like the Aussies are wrong to call out the Chinese: The facts continue to show that the Chinese government opted to suppress and censor vital information about COVID-19 in the early days.

Thus, the question I am struggling with is, should we be excited about this increased export opportunity, or concerned that China’s bullying and defending of lies is going too far? This week, Agriculture Canada said in their May estimate that total Canadian barley exports to China would drop on lower exports of feed barley, despite the higher exports of malted product. The good news is that the U.S. is buying more barley from Canada; the bad news is that it’s estimated up to 60% of the 8,000 US craft breweries could be closed if the economy doesn’t back up within the next few months. Further, with every single sporting event cancelled, commercial beer sales globally have plummeted. 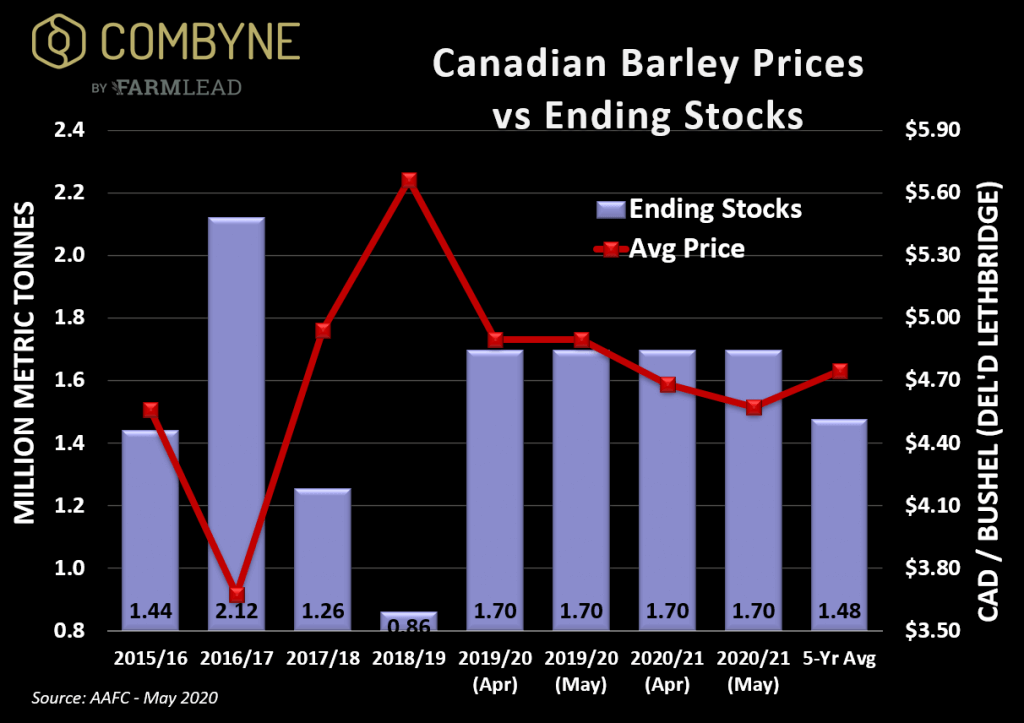 Canola prices lost some love from traders this week as it slipped to two-week lows on the weakness from soy oil and soybeans, as well as hitting some technical lines of resistance. That said, there is some bullishness for canola as Agriculture Canada noted “the COVID-19 pandemic appears to have had minimal impact on canola demand”, as strong buying by the EU and UAE in March and April helped. Through week 41, cumulative canola exports are now tracking 6.4% above last year with 7.84 MMT sailed. 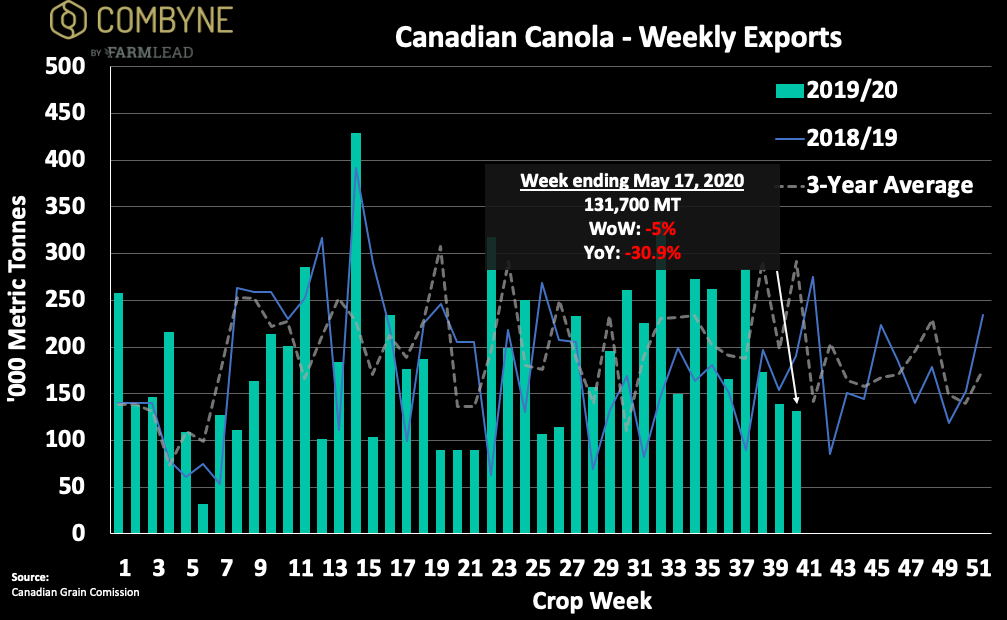 Speaking of the COVID-19, the U.S. government is bringing out its chequebook yet again for its farmers. the U.S. government says that the fall in corn prices and others from January to April was not market-related and that they’ll help recover half of the decline over that period. For corn, this means $0.67 USD/bushel and for soybeans, its means $0.95 USD/bushel! Like many others, I think this subsidy will shut the bin doors again in the U.S. much like the MFP payments to offset the trade war with China did last year!

Ultimately, there are some major political and economic shifts happening under our feet. There are many concerns that China is using the same playbook that the Soviet Union did in the 70s, spreading the communist agenda, while getting a major discount on commodities (who can forget the Great Grain Robbery in 1972). Quite simply though, China needs food and a hungry population is much more likely to push back on a government.

From a domestic economic standpoint, the longer governments are willing to send workers COVID-19 stimulus checks, the less likely they are to go back to work. Getting paid to sit at home is way less risky than trying to find another job or, even risking infection if said worker is employed by a consumer-facing business (i.e. restaurant). Governments around the world are tapping every ounce of cash they can to try and keep the economy going but once these programs end in a few months, those workers are going to be laid off, therein potentially setting things up for some nasty economic data in early summer. I could be completely wrong, and the economy opens back up to normal, but based on rules suggest thus far, a return to normal seems unlikely in the short-term.

What happened to grain markets this quarter?

The Crop Trait Approval Process — From Discovery, To Development, to Clearing Regulatory Hurdles

Can we only go up from here? This week in the grain markets