It seems a bit of a no-brainer that the earlier weeds are taken out, the better. But that wasn’t always the case.

“For years, standard farming practice was to delay that first in-crop herbicide application in order get a wider spectrum of weeds,” says Liz Simpson, canola agronomic systems manager with Bayer. “Today, that practice has shifted to early weed removal because crops that emerge without any weed interference have a higher yield potential thanks to the reduced potential for competition.”

Simpson adds that early weed removal is about more than simply reducing weed competition. “Getting rid of weeds earlier rather than later is also a very effective resistance management tool,” she says. “Controlling weeds early gives the crop a competitive advantage over any later emerging weeds and helps to keep weed densities low.”

Early weed removal can take the form of a pre-seed burndown, or an early in-crop herbicide application, or both. Simpson says that, from a resistance management perspective, it’s important for farmers to use multiple effective modes-of-action in their tank mixes, regardless of spray timing.

Simpson says farmers should check out Mix It Up™, a website from Bayer, for tips on product mixes specific to geography and crop, and to learn more about how herbicide resistance develops and what steps you can take to manage it on your farm.

“Bayer has a full range of herbicides that can help you combat resistance in your most important crops,” says Simpson. “Weed resistance isn’t going away, so it’s important that we do everything we can on the farm to slow its development while protecting the usefulness of the herbicide tools we have now.”

The first one is Roundup Xtend® herbicide with VaporGrip® technology. A new glyphosate and dicamba pre-mix, Roundup Xtend herbicide has two modes of action for resistance fighting, is easy to use and is effective against tough problems like wild buckwheat, Canada fleabane and kochia.

The second is Xtendimax® with VaporGrip® technology. This dicamba-only formulation can be mixed with glyphosate (perfect for farmers who buy bulk Roundup), as well as those who are trying to leave Roundup out of a spray application, without compromising weed control.

Dicamba in both products offers residual control of certain weeds (see labels), and VaporGrip® technology significantly minimizes dicamba volatility so that you get on-target, effective weed control you can trust.

Canola growers have a powerful resistance management tool in new DEKALB® hybrid called DKTFLL 21 SC. This hybrid carries both industry leading herbicide traits: TruFlex™ with Roundup Ready® technology and LibertyLink®, making it a powerful tool against glyphosate resistant kochia. Add to that an R rating for blackleg and improved pod integrity for straight cut flexibility and DKTFLL 21 SC is a good fit for many growers.

“Managing herbicide resistance through early weed removal and using multiple modes of action is important for crop success,” says Simpson. “Sometimes it can be tough to figure out what mixes are right for a certain field, or determining optimum timing for early weed control.

For more information about Mix It Up and the herbicides noted here, click the image below: 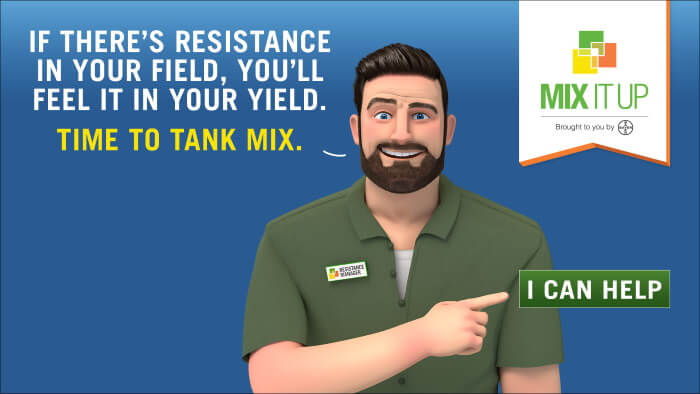 A seed for every season