Grain markets saw a bit of a sell-off on the last Friday of May with mostly lower as the traders booked profits before the end of the month amidst growing uncertainty in U.S.-China trade relations. This week, China moved with a heavy hand to take full control of Hong Kong, the city-state given up by Britain in 1997.  On Friday, U.S. President Trump announced a variety of new regulations on Hong Kong, notably, the special trading status it enjoyed with the U.S.. Basically, with China’s aggressive move into Hong Kong, going forward, the U.S. is going to treat the financial and trading hub as it treats the rest of China.

On that note, this past week, a B.C. court ruled against Huawei CFO Meng Wanzhou in her bid to avoid U.S. persecution through a “double criminality” clause. Ms. Wanzhou and her lawyers argued that what the U.S. was accusing her of (lying to HSBC about ties to Iran via a subsidiary there), was not a crime in Canada, but the judge said otherwise. There are obvious expectations that China will retaliate economically in someway as they are clearly unhappy that Canada’s judicial system and politicians didn’t meet their wishes.

Quite openly, Chinese state-media showed their emotions and is pissed that she wasn’t released, saying this decision will “make Canada pathetic clown and a scapegoat in the fight between China and the United States. For the record, the Canada-China trade relationship is worth about $100 billion, with about $75 Billion of Chinese goods exported to Canada and $25 Billion of Canadian goods exported to China. We already know canola prices have taken a big hit from China revoking Viterra and Richardson’s export licenses and so this move put some pressure on canola prices this week.

Also pressuring canola prices was the Canadian Loonie finding some strength as it teeters closer and closer to 0.73 USD, a level not seen since March. As mentioned in last week’s grain markets recap column, there is some bullish buzz on the export and domestic crush front, as Agriculture Canada raised its export forecast, which in turn, lowered ending stocks to 2.6 MMT. For perspective, Agriculture Canada was estimating 2019/20 canola ending stocks as high as 4.7 MMT back in November. This past week, I gave a hearty download of my thoughts on where canola exports and prices are heading and how it might make sense to make some sales in the next few weeks (if you haven’t already done so). 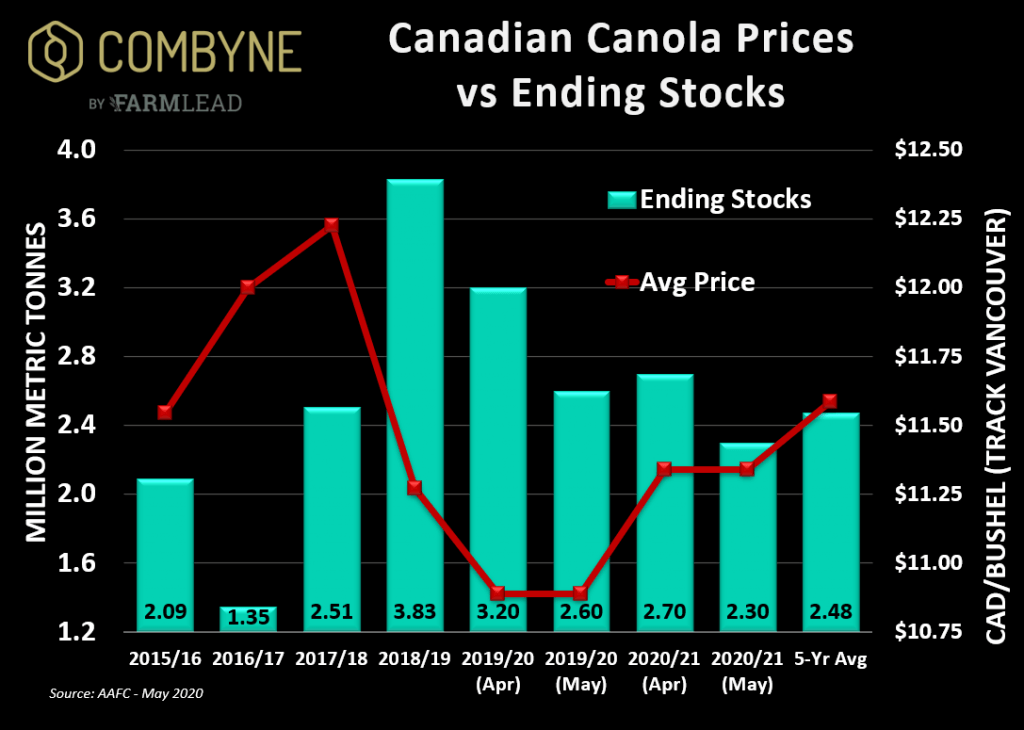 Canola prices will, as usual, continue to track alongside soybeans, which are waiting to hear about more sales to China as part of the People’s Republic meeting their Phase One trade deal commitments. April customs data showed us that China imported 6.175 MMT of soybeans, down 12% year-over-year. This included 5.94 MMT of Brazilian soybean exports (+3% YoY but also nearly triple March 2020’s shipments to China), but just 665,600 MT of U.S. soybean exports (-62% YoY).

Going forward, it’s expected that soybean imports by the People’s Republic in May, June, and July will average 9 MMT, which would be well above-average, if realized. But this trend of buying Brazilian beans seems to be continuing, as, this week, China bought over 10 cargoes of Brazilian soybeans for August, September, and October delivery, which is usually exactly when a lot of U.S. soybeans are supposed to be headed to China.

Many analysts are suggesting that this is a hedge against dwindling relations with the United States. This could put pressure on how much China needs to import: the CARD think tank at Iowa State University is predicting that China will only import about half of the $36.5 Billion of agricultural products that they promised they would in the Phase One trade deal.

On that note, corn prices lost a lot of ground in May, as demand continues to be a bit question mark, be it for feed, for ethanol, and even for exports (which are tracking 27% behind a year ago). Further, with demand so depressed, hedge fund managers have gotten unseasonably ultra-bearish on corn prices at a time when weather premiums are usually pushing them to get long. That said, corn prices could see a healthy pop if there’s any sort of short-covering by said money managers 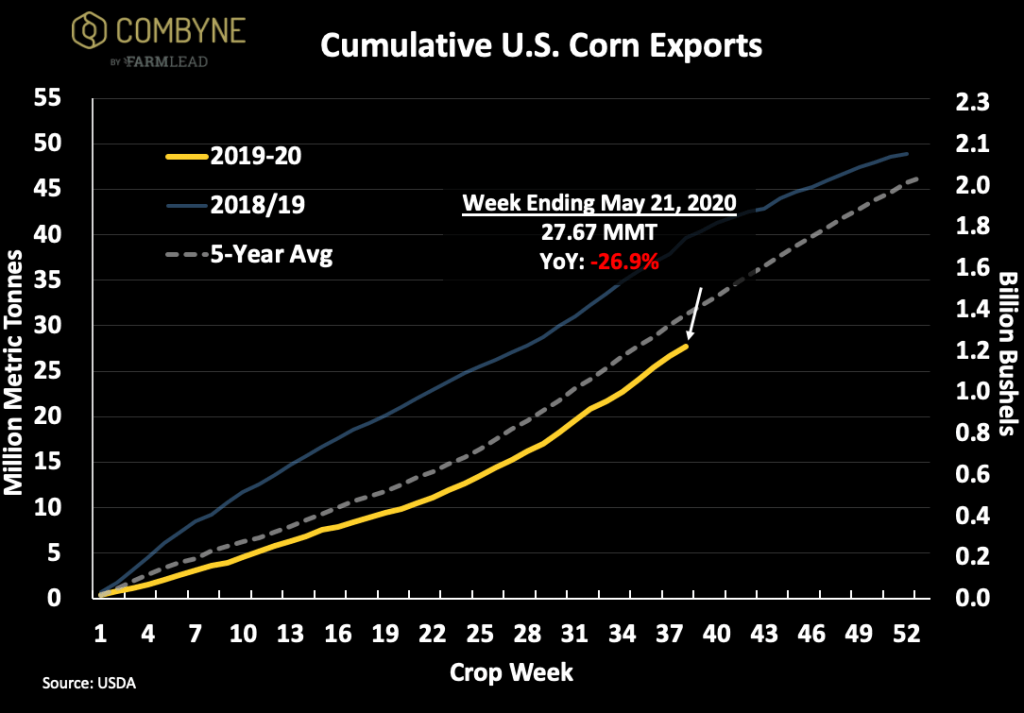 Wheat prices found some strength this past week on drier weather concerns in the U.S. Southern Plains and parts of Europe. For the latter, the European Commission lowered its estimated of the bloc’s 2020 soft wheat harvest by 4.3 MMT to 121.5 MMT, which, if realized, would be a 7% decline from the 2019 haul. And since EU wheat exports are tracking two-thirds higher than this time a year ago, a smaller incoming wheat crop already could tighten inventories even further.

This in mind, even though wheat prices may have some further upside potential, new crop pricing is actually fairly attractive compared to years past. That said, you can check out some of my more detailed new crop sales recommendations in my weekly Wheat Market Insider column for the Alberta Wheat Commission. The TLDR on my new crop wheat sales is that I’m 20% sold on HRS wheat, 35% on CPS/low-protein wheat, and 35% sold on durum. 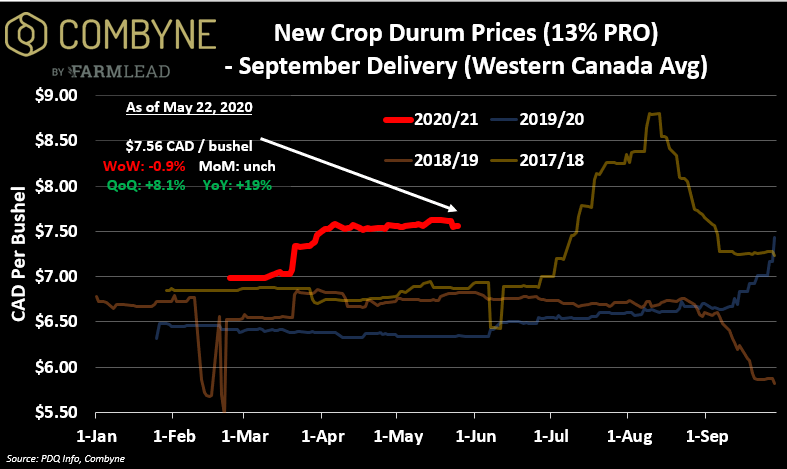 Finally, in pulses, a new wave of locusts that are arriving just as the monsoon starts and will intuitively threaten the kharif summer crops. I’ll admit, I don’t think this is too much of a bullish factor but we do know India is still in the market for peas and lentils as domestic supplies are a little tighter than officials were originally planning. Worth noting is that Canadian lentil exports from licensed players are tracking nearly 3 times higher than a year ago, while Canadian pea exports are 36% higher than a year ago. 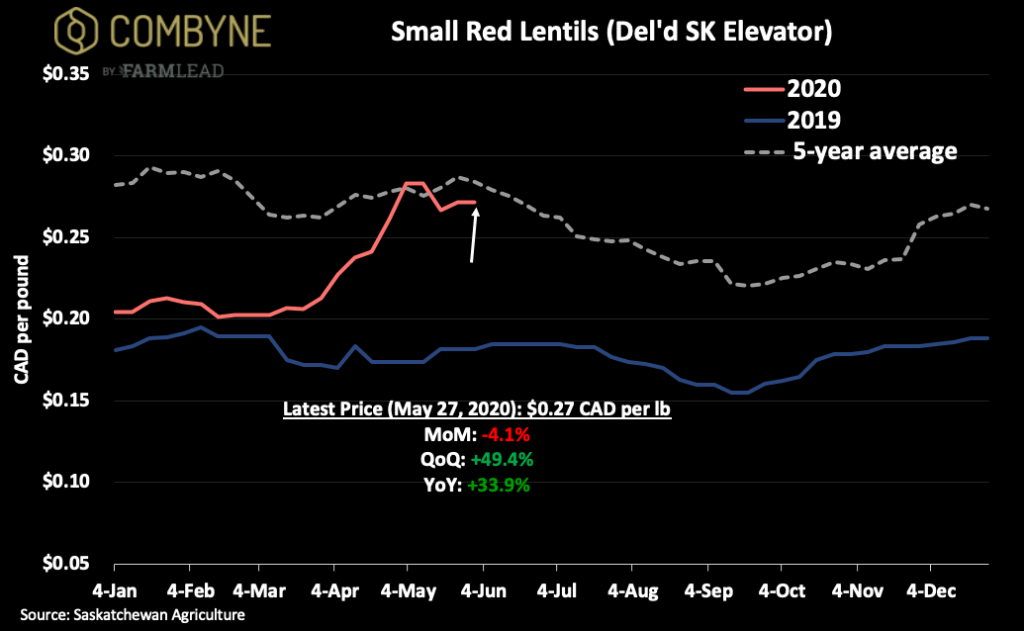 Similar to durum, lentil prices are the best they’ve been in many years and should not be ignored; lock in some new crop sales to ensure some profitability! This brings to mind the saying, “Make sales when you can, and not when you have to! Accordingly, this time of year is when we start to see some volatility, which, in grain marketing terms, means opportunity. Therein, now is the time to review some target pricing and/or get your Listing posted on Combyne so your buyers understand your indications and can snap up as their own trading screens and hedges will allow.

Have a great weekend and see you in June!