Grain markets started the month of May on a downer as the combination of good weather and renewed trade fears between the U.S. and China stoked increased pessimism in the complex. Despite the latter sentiment, China did buy a lot of U.S. soybeans this week, which helped the oilseed close in the green; this helped canola prices improve as well. Wheat and corn prices were pressured by benign growing conditions.

With a really nice window of weather, farmers across the U.S. hit the fields hard again this week, leaving some analysts to think that, in Monday’s crop progress report from the USDA, we might see close to 50% of the U.S. corn crop planted! On average, 50% of the U.S. corn crop is planted by May 10th. This bearishness comes as expectations are building for 2020/21 corn carryout in the U.S. to push above 4 billion bushels as the crop deals with a major shift in price paradigm (we’re looking at you, ethanol).

On the flipside, record heat is expected to negatively impact the winter wheat crop in Kansas and Oklahoma. This comes just as the crop is still recovering a couple frost events over the past couple weeks. I remind myself constantly though that wheat is a weed and grow in pretty much any conditions!

Looking quickly at the Land Down Undaa, the USDA’s attaché there says that the 2020 Aussie wheat crop should rebound by about 50% compared to last year to 23 MMT. This is based on acreage is expected to climb 20% to 29.9M, and some wet (but appreciated) weather earlier on in the calendar yea. It’s hard not to feel for the Australians and their dry paddocks – many areas haven’t got much of a rain in 3 years!

Speaking of rain, heavy precipitation in Argentina have stopped the corn and soybean harvest there. The silver lining though is that this same moisture should help boost the soil profile for the wheat Plant 2020 campaign that’s starting in a few weeks. Keep in mind that a lot of Argentina didn’t see any wet weather in April, which is one of the reasons that their main river for export markets, the Parana, is super dry. More specifically, government data suggests that the Parana River’s water levels at the port of Rosario is about half a meter, down significantly from the average in April of 4 meters!

Where there also are logistical issues are at Canadian ports when it comes to moving containers. Ray-Mont, a transloader at the Port of Vancouver says that they are running at about 50% the normal pace for containers headed for Asian markets. Conversely, one estimate from Transworld Group, a major transporter, says container ships have idled about 15% of their capacity and there’s been about a 20-25% drop in volume of goods moved via containers because of weaker consumer demand during COVID-19 (think clothes and other materialistic goods that aren’t deemed “essential”).

This is all significant for crops that are NOT traded on the futures market. More acutely, a lot of crops other just pulses (i.e. flax, canaryseed, mustard, etc.) are transported abroad via containers, including nearly 1/3 of all Canadian pulses! This comes at time when the prices for all these crops are doing a lot better than they were a month ago (or for the last 2 years for that matter!). While I’m not doubting that, if Mother Nature is nasty this growing season, here could be some further upside for flax, pea, or lentil prices. But from where I’m sitting, these prices are buying more acres, and now there seems to be more risk to the downside. 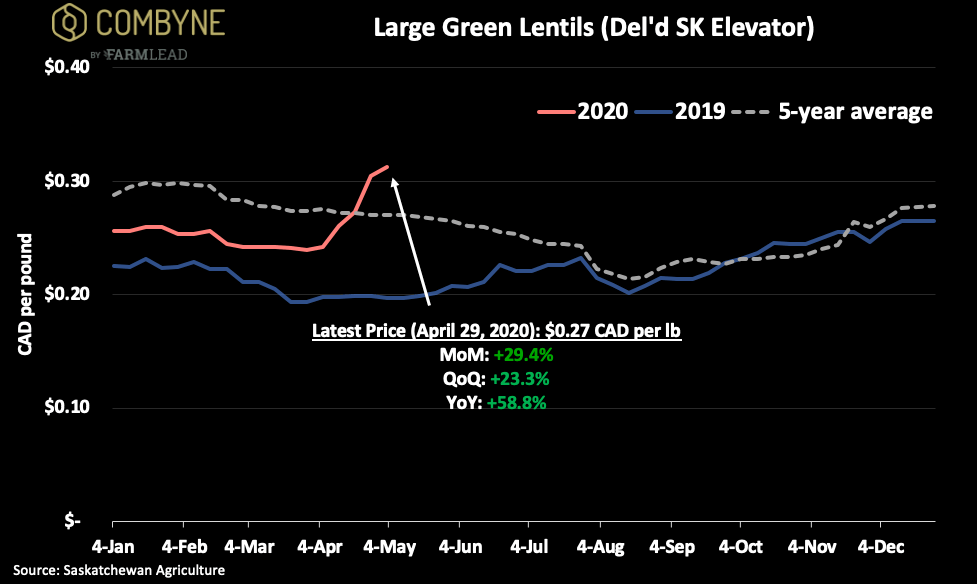 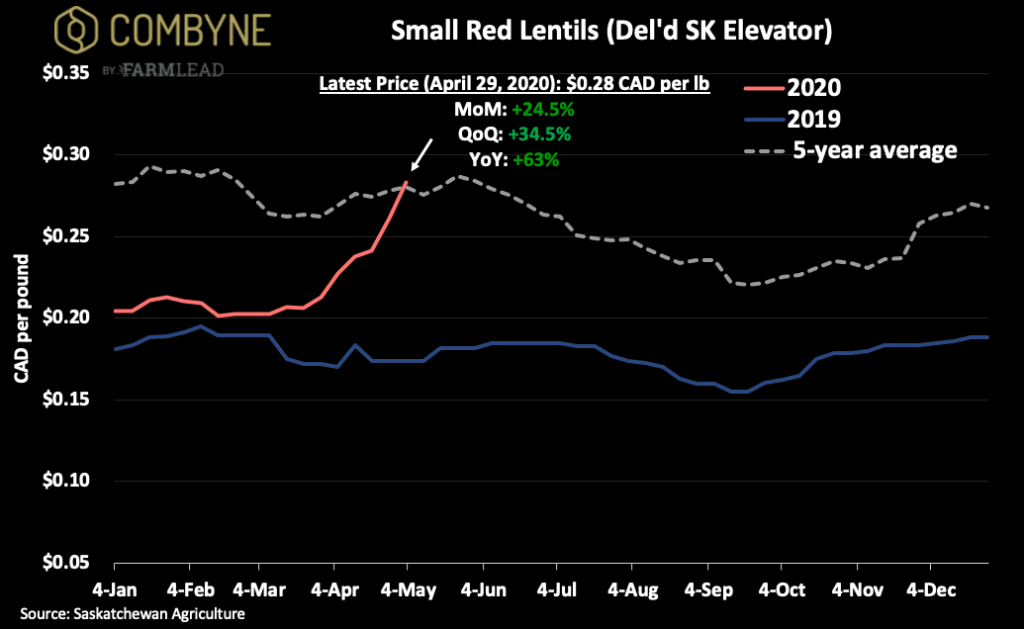 The outlier here may be kabuli chickpea prices, which haven’t followed the rise in pea or lentil prices too much, despite fewer acres in both North America and India. More specifically, India’s kabuli cchickpea harvest looks to be about 100,000 MT smaller than what we saw last year, while Mexico’s crop is going to be about half of what it was in 2019. Thus, kabuli chickpea prices are expected to peak later in 2020 or early 2021 as supplies carried over from the 2019/20 crop year are exhausted and international buyers start hunting for new product. 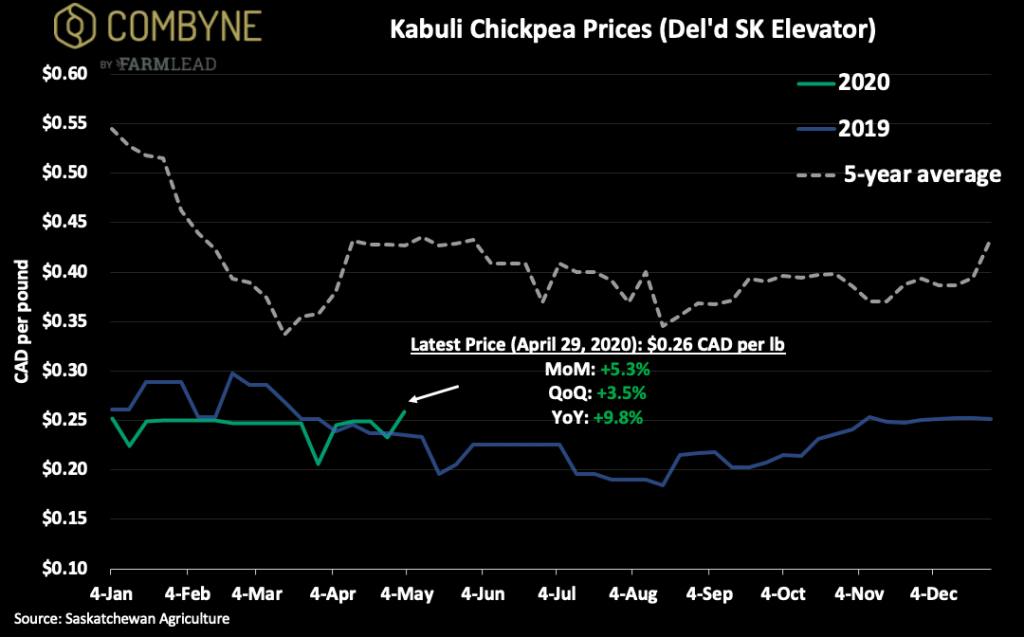 Coming back to North America, using the Defense Production Act, President Trump has ordered U.S. meat-processing plants around the country to stay open in order to protect the food supply chain. [As part of the push from the White House, meat processing plants will receive additional PPE gear in order to reduce the risk of contagion for COVID-19 amongst workers who stand side-by-side all day long. Within the past 2 months, roughly 25% of America’s pork processing capacity has been idled, while beef plant closures have led to about 10% of capacity going offline.

But getting this meat plants to open back up now is probably too late for many farmers. Already, 100,000s of animals have been culled as farmers can’t take on the financial payload of keeping the animals fed. The number of animals killed could be in the millions though if you account for the unborn calves and/or piglets that have been euthanized. To put into perspective, missing one day of taking the animals to market would put many hog operations back one week in their production schedule (or 5 days = 5 weeks).

Right now, it is estimated by the National Pork Producers Council that, because of COVID-19 and plant closures, hog farmers in the U.S. will lose $37/head for the rest of the year. This is compounded by the fact that, with no ethanol plants churning out DDGs these days, feedstuffs are hard to come by. Conversely, the opening up of meat plants would intuitively mean more demand for livestock feedstuffs as animals bulk up before going to market.

This is important as it would come at time when everyone is questioning if China will make good on its promises to the U.S. in terms of just how much American commodities they’ll buy. That said, last week, President Trump told the world that the Phase One trade deal with China has taken a back seat to holding China accountable for its role of not containing COVID-19 properly, in addition to keeping details about the virus quiet until it was too late.

Overall, this week, the grain markets started to feel a whole lot more bearish. Accordingly, we’ll need some pretty bullish headlines – be it from China buying more, too much rain or too much heat, or even economies opening back up, full tilt – to pull us out the mud we’re getting stuck in. That said, don’t be caught being the farmer posting their stuck planter or air drill on Twitter! Good luck out there getting Plant 2020 going!