Grain markets were mixed this week as we got the first look at how the USDA is thinking about the 2020/21 crop year in terms of supply and demand, just as demand peeks its head out from underneath the COVID-19 covers. Through the middle of May, soybean and corn prices were helped by more optimism that China would make good on its Phase One trade deal promises, whereas wheat lost some ground due to welcome rains in Europe and the Black Sea.

On Tuesday, May 12th, the USDA gave us their first official estimates of the new 2020/21 crop year. While the USDA did acknowledge some stronger demand from China, in my opinion, they didn’t really factor in the more long-term effects of the COVID-19 virus on commodity demand. Obviously, the crystal ball isn’t exactly clear right now, but it just doesn’t seem likely that demand for corn going into ethanol, according to the USDA, is going to be greater than that of 2019/20. More specifically, the USDA raised their outlook for corn going into ethanol in 2020/21 to 5.2B bushels, up from the 4.95B bushels that they’re forecasting for the 2019/20 crop year.

While the U.S. ethanol industry is starting to re-open some plants, I have my doubts that oil demand will radically rebound to pre-COVID-19 levels. While there is the bullish camp that people will drive more because they don’t want to use public transportation, less people have jobs that they actually have to drive to, be it because they are now working from home (and will continue to do so for the foreseeable future), or they don’t have a job anymore anyways! Further, social activities like going out to restaurants, movies, kids sporting events, and even summer vacations are all being put on hold until further notice (or for the latter two, cancelled completely!). 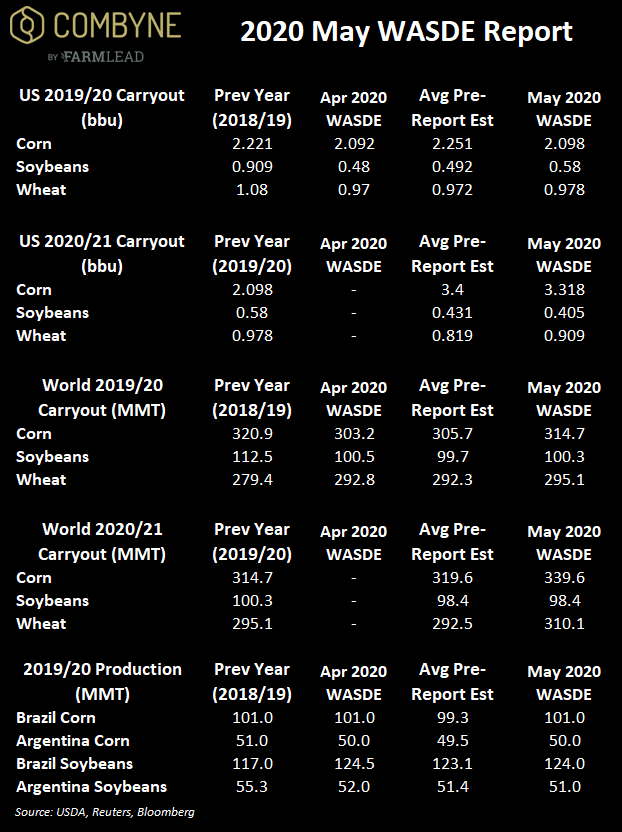 On the soybean side of things, the USDA is a bit more bullish because they are expecting China to import 96 MMT of the oilseed in 2019/20 as the People’s Republic work on rebuilding their hog herd. While Chinese state grain-buying company COFCO said this week that the country will start to “speed up purchases”, it’s widely expected that they’ve already bought a lot with roughly 9 MMT expected to arrive in May, June, and July each. That said, through Week 36 of its 2019/20 crop year, U.S. soybean exports are tracking 4% higher than last year with 34.66 MMT sailed. Thus, if China started to buy more soybeans over the summer and into the fall, the harvest dip for soybean prices might not be as significant as usual. 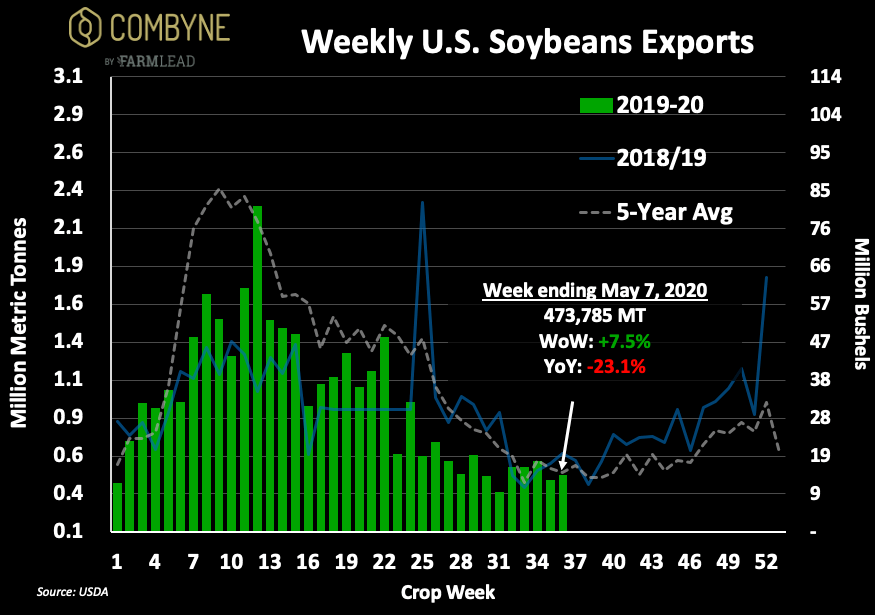 The one bright spot on the U.S. soybean balance sheet continues to be domestic crush volumes. On Friday, we got the April soybean crush report from NOPA members (they represent 95% of total crush capacity in the U.S.), and it showed 171.8M bushels of soybeans were used. That is a new record for the month of April and about 1.5M bushels higher than pre-report guesstimates, but down a bit from March’s 181.374M bushels (which is the new crush record for any month).

Switching oilseeds, Canadian canola crush is acting as like the same insulator for canola prices in how soybean crush volumes are helping U.S. soybean prices. We’re likely going to see record canola crush in Canada this year, but like the dip in the U.S. crush, there’s expected to still be some negative demand blowback from COVID-19. The bigger question mark for canola will be final acreage in Canada, as well as demand from Europe.

On the latter, Jon Driedger of LeftField Commodity Research has done a fantastic job of analyzing the EU biodiesel market, oilseeds demand, and how Canadian canola exports may fare going forward. Since EU rapeseed production continues to fall because of seed treatment bans and as a result, profitability in growing the grow has decreased substantially, this means the Bloc will need to rely on more imports. Ukraine is option number 1, but any reduction in EU or Ukrainian production means opportunity for Canadian canola exports. 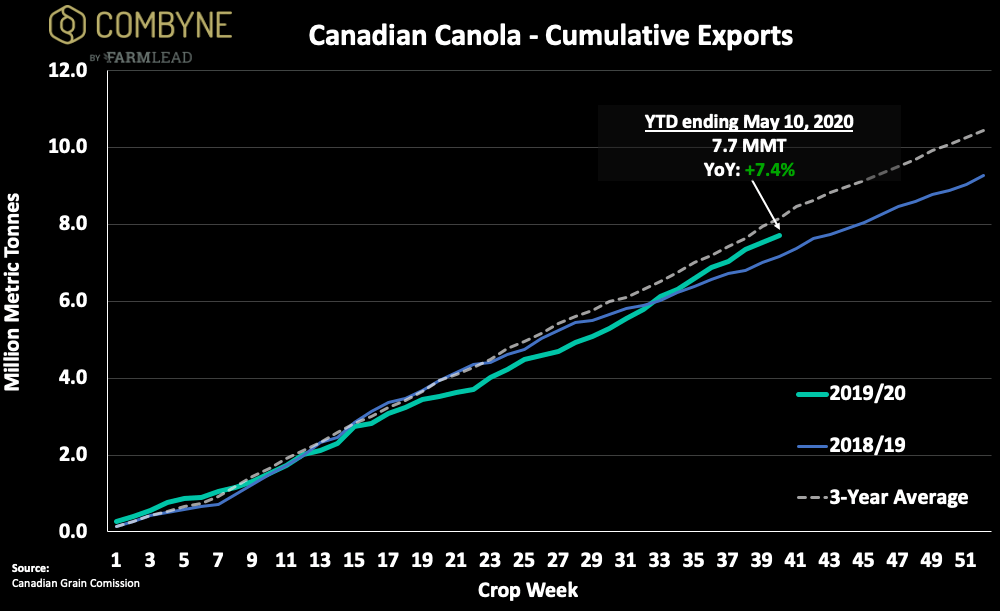 Right now, the EU importing more Canadian canola is a big reason why total 2019/20 exports are tracking 7.4% ahead of last year with 7.7 MMT sailed through Week 40. Going forward, one would hope for some more business from China but the USDA think that they’ll only import 2.5 MMT in 2020/21, about half the levels reached back in the 2017/18 crop year. That said, Canadian canola exports in 2020/21 are estimated by the USDA at 8.9 MMT, a drop of 300,000 MT from the 2019/20 estimate thanks to stiffer competition in the European market from Australia and the Ukraine. Conversely, China’s rapeseed/canola imports in 2020/21 are estimated at just 2.5 MMT,

Also competing for attention from the EU biodiesel market is Australia, where the USDA thinks production will rebound significantly and exports should climb by 17% to 2.1 MMT. That said, the most surprising number for me in the May WASDE report was the USDA’s forecast of Aussie wheat production. They think that Australian wheat production will climb by nearly 60% to 24 MMT and exports by more than 80% to 15 MMT. 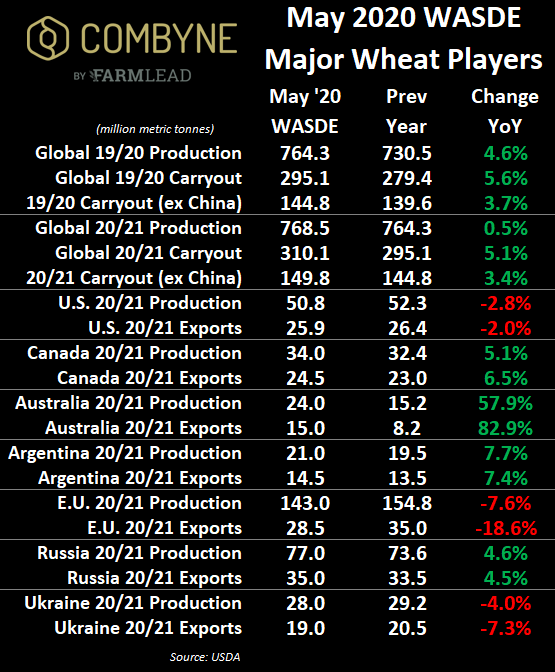 On the flipside, the USDA pegged 2020/21 wheat production in Ukraine and Europe lower year-over-year with, with the latter estimated to see a 20% reduction in exports to 28.5 MMT (versus 35 MMT estimated in 2019/20). That said, good rains fell last week in areas of France and Germany that really needed a shot of moisture. Similarly, drier areas of the Black Sea got some desperately-needed moisture, but there are some doubts if these rains will be of help to a winter wheat crop that is a few weeks from being combined.

Ultimately, I think that both 2019/20 and 2020/21 ethanol numbers will be revised lower over the next few months. Ultimately, I think that the May WASDE estimate of Australia’s wheat production and export numbers are a bit high and could be drawn down over time. Overall, going forward, we could either be on a roller coaster or carnival carousel when it comes to grain markets. If we see either any demand shocks or export restrictions due to COVID-19, then prices will react violently. On the flipside, if there aren’t any big headlines, the strong start to Plant 2020 and a benign weather could easily make the next few weeks a boring ride in circles (or price ranges).

Eyeing the Competition — This Week in the Grain Markets

Soybean shuffles and canola climbs — This week in the grain markets