Grain markets closed mixed this past week as demand interest from China supported soybeans (and canola followed) while all other crop prices fell on expectations of bigger crops. In the June WASDE report, released on Thursday, the USDA showed the market weaker ethanol demand and a bigger U.S. winter wheat harvest. Supporting grain markets before that had been some warmer/drier conditions forecasted for not only the Midwest, some other areas of Canada. For those who are bullish/hopeful on a weather rally, keep in mind that many areas have decent soil moisture that’s carried over from last year.

Going into the June WASDE report, traders were fairly bearish as the looked to bigger crops in the U.S. and South America adding to an already-heavy supply base and uncertain demand. Specific to corn, ending stocks in the United States were raised again in the June WASDE and adding to challenges was a cut in ethanol demand, albeit it was less than what grain markets were expecting. While some ethanol processing facilities are starting to re-start, I estimate that there’s already been about 500M bushels in corn demand that has been lost over the last 3 months. I’ll admit that this is less that what I was initially expecting, but, as mentioned, we’re far from being out of the woods.

This in mind, without any major weather issues, grain prices tend to drop as we get deeper into the growing season, and thus, I expected corn prices to start to pull back in the coming weeks (even despite the hotter weather…a week doesn’t make the crop!). On that note, the USDA left U.S. corn yields and planted acreage unchanged at 178.5 bushels and 97M acres, but sentiment across grain markets is that this number could be lowered to 94M acres before the 2020/21 U.S. corn crop year official starts on October 1st. Globally, the USDA only increased Brazil’s corn harvest by 1 MMT to now sit at 107 MMT but a lower 2019/20 carryout meant global 2020/21 corn ending stocks were also lowered from last month’s WASDE report. 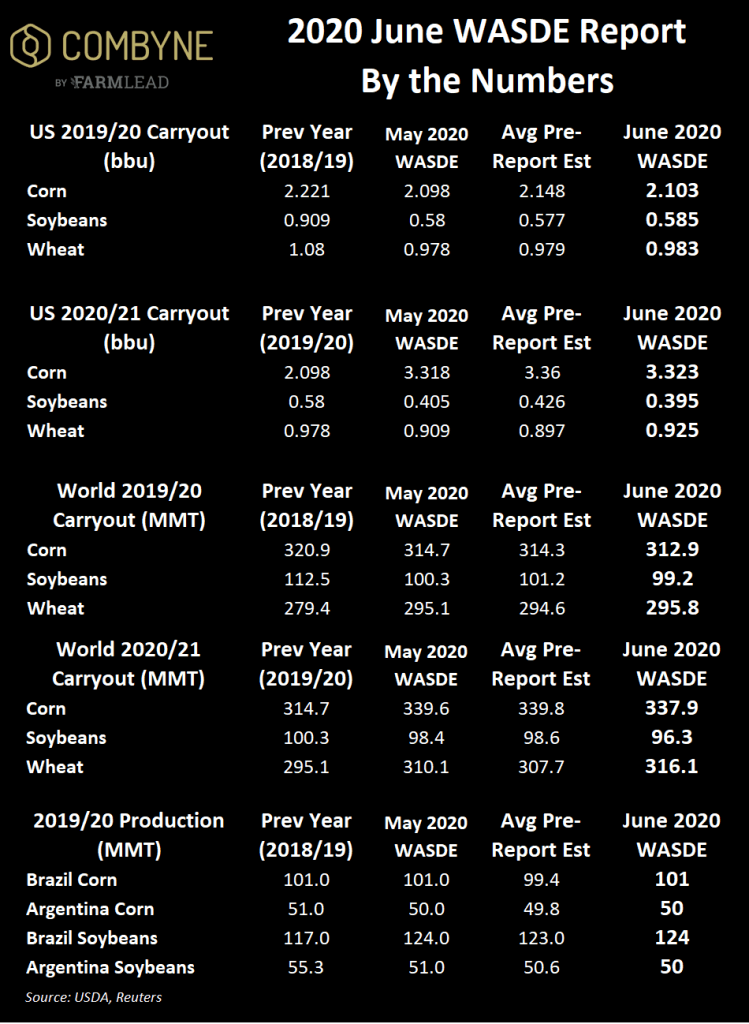 For the wheat market, prices in Chicago dropped to a three-week low yesterday as the USDA raised their outlook for the winter wheat harvest in the U.S., as well as raising global inventories to a new record of 316 MMT. Wheat prices have already been pressured this week by the start of the northern hemisphere’s harvest and some bigger production expectations from the Land Down Undaa. On that note, the Aussie wheat harvest was raised by 2 MMT to 26 MMT, and exports by the same amount to sit now at 17 MMT.

Offsetting, the increase in the wheat harvest estimates for the United States and Australia was downgrades for the E.U. (lowered by 2 MMT to 141 MMT of all types of wheat) and the Ukraine (dropped by 1.5 MMT to 26.5 MMT). The reason for the wheat harvest downgrades is squarely pinned on the hot, dry spring weather that most of the region experienced.

While the USDA kept the Russian wheat harvest at 77 MMT in the June WASDE, IKAR raised its estimate by 2.4 MMT to 78 MMT based on better yields than initially expected. Worth mentioning (albeit not super relevant in the global wheat trade game) is that India’s wheat harvest was raised to a new record of 107.2, a jump of 4.2MMT from the May WASDE report. Similarly, China is expected to hold more than half of all global wheat supplies by the end of 2020/21 (thus, somewhat nullifying the significance of a new record carryout!

Similar to wheat, swaying production and trade production estimates are keeping barley prices elevated, but moreso in the feed category than malt, as for the latter, demand from the beer industry has basically dried up. This is a serious issue for Australia, who accounts for about 30% – 40% of global malt barley exports. Further, Aussie barley has been shut out of the Chinese market thanks to the recent 80.5% tariff that looks to be political retaliation for Australia calling for an investigation into China’s handling of COVID-19 information in the early days of the virus. 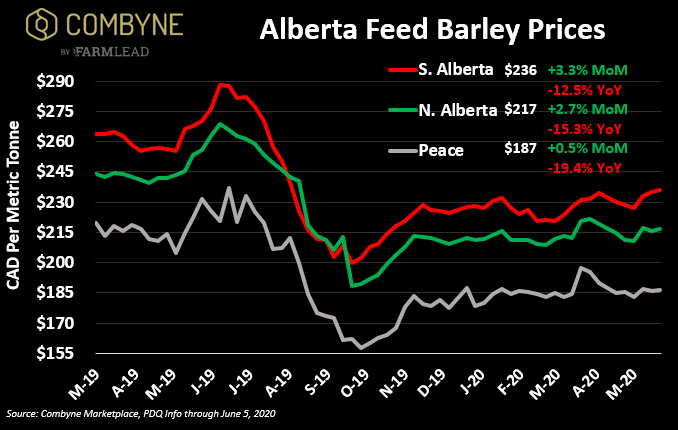 However, it’s not all bearish as the dry, warm weather in Europe and the Black Sea is starting to appear in the production forecasts of government agencies and private firms. For example, France’s Ag Ministry is forecasting their winter barley crop at 8.17 MMT, down 12% year-over-year (albeit spring barley acres are up 14% and nearly 50% above the five-year average at 1.8M.). Further, in the Ukraine, APK-Inform is estimating that barley production there will fall 23% year-over-year to 6.83 MMT, mainly because of a 16% drop in acres planted, including 27% less spring acres seeded.

Finally, in Russia, consultancy firm Ozip is estimating production to fall 5% year-over-year to 19.45 MMT. As the Black Sea usually dominates the feed category, especially in the Middle East, it might open up some opportunities for additional Canadian or Australian feed barley exports. To date, total Canadian barley exports are tracking 11% lower year-over-year with just 1.79 MMT sailed through Week 44. 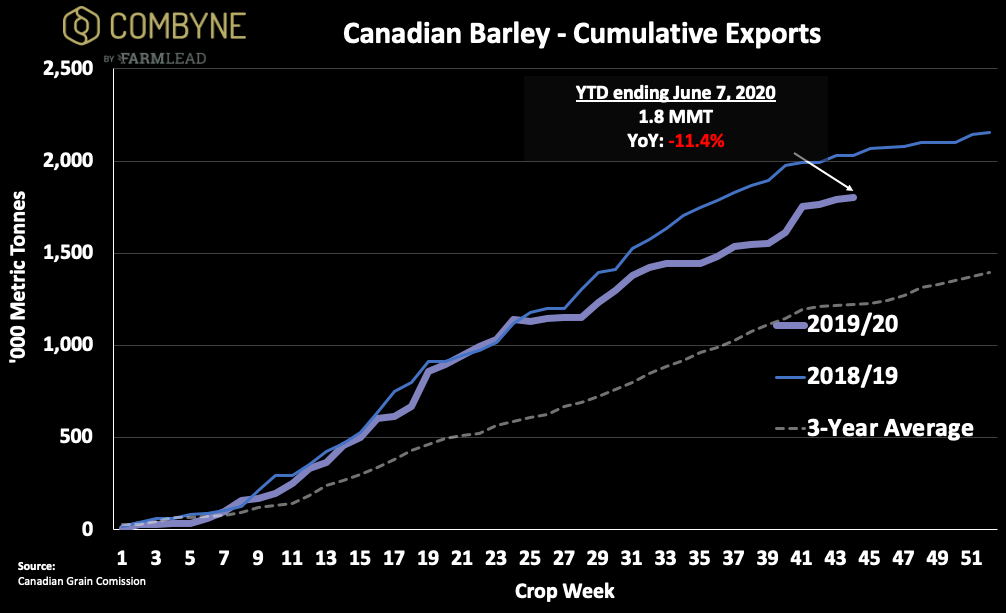 Wrapping things up, canola prices seem to be mostly rangebound and are mostly following the soybean and palm oil markets. On that note, most of the attention going into the June WASDE was on the soybean balance sheet, notably competing soybean exports from Brazil and the U.S., and what China will buy. The bulls were disappointed though that the USDA dropped their U.S. old crop soybean exports target yet again; this time it was 25M bushels in yesterday’s June WASDE report, adding to the 100M-bushel drop in last month’s WASDE report. U.S. 2019/20 soybean exports are now estimated at 1.65 and 2.05 Billion bushels respectively (or 44.9 MMT and 55.8 MMT if converting bushels into metric tonnes).

Despite the pessimism shared by the USDA in yesterday’s June WASDE report, China continues to buy U.S. soybeans, including 10 cargoes so far this month that we know about. This is likely due to currency effects as the U.S. Dollar is sitting at a 2-month lows while, conversely, the Brazilian Real has touched 2-month highs. That said, last week saw the largest sales of U.S. soybean exports so far this crop year and the largest since 2018 with 2.22 MMT contracted. From an actual shipments standpoint, U.S. soybean exports are now barely tracking above last year’s pace. 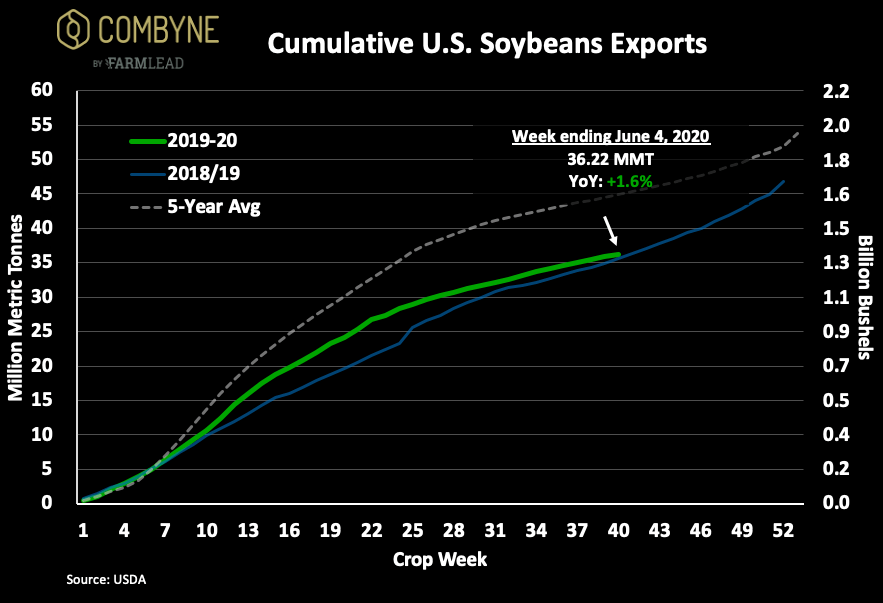 Reading between the lines of the June WASDE, it’s safe to say that China is likely to buy much of the world’s surplus in soybean production, as their 2019/20 imports were raised by 2 MMT to 94 MMT (but 2020/21 was unchanged at 96 MMT). That said, China has already booked at a lot of soybeans, mainly from Brazil, and that may mean that their exportable supplies are starting to dwindle. In fact, Datagro estimates that Brazilian farmers have already sold nearly 90% of their 2019/20 crop (or about 106.5 MMT), as well as one-third of their 2020/21 expected production, which is well above-average for this time of year.

Ultimately, between COVID-19 cases surging again, and depressed commodity prices, it’s tough to find further silver linings this week. Specific to grain prices, the UDSA showed us with their June WASDE report what we already knew and as we move forward, there’s going to be a lot of focus on weather and any demand headlines are eagerly welcome.

Pricing in the Risk — This Week in the Grain Markets