Over the past month I’ve been asking commodity analysts and economists to speculate on whether we would see a $0.65 or $0.75 dollar first.

All but one analyst replied — generally with great resolve — that $0.65 was the correct bet.

That is not looking to be the case at at this point, as the Canadian dollar has risen more than three cents in the last 30 days, exceeding the $0.74 mark on Wednesday.

Going back to mid-March, the loonie touched $0.68170 in the middle of the COVID-19 outbreak in North America, while at the same time Russia and Saudi Arabia decided to flood the world with oil in the middle of a demand bust.

See my appearance on RFD-TV talking about the recent movement in the CAD compared to the USD.

JP Gervais, chief economist for Farm Credit Canada, notes “oil is playing a role in that the economic rebound on the horizon is pushing oil values higher, and the Bank of Canada saying no to negative rates has started to slowly pull back some of its monetary operations to inject liquidity.”

In a Globe and Mail post, Darcy Briggs, a portfolio manager at Franklin Templeton Canada says “commodity-based currencies, such as the Canadian dollar, have tended to rally recently with just a better outlook of increased growth coming out of the lockdowns.”

Of course it’s easy to look back, but what about the future movement of the Canadian dollar heading into the summer months? Gervais believes “the pullback is quite timid, and so I wouldn’t be surprised that some of the gains in the Canadian dollar are erased in the near future. But the markets definitely think that rates are going to remain low for a long time in the U.S.” 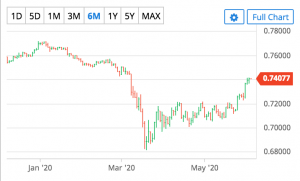 Recently on RealAg LIVE, Ted Seifried of Zaner Ag Hedge stated that he believes the WTI oil price will not stop at $34/barrel, but will climb north of $60 in the coming months, which supports a further lift in the Canadian dollar.

For the exportable agricultural commodities, a rising Canadian dollar is a threat to cash prices this summer. Over the same thirty day period, canola has not fallen on the same percentage basis as the dollar’s climb, but the opposite direction of the two is evident.

In any Canadian farmer’s risk management plan, hedging the dollar is critical to contain any potential loss or for locking in profit.

Halftime analysis in the grain markets

Cold Surprises — This Week in the Markets