Grain markets ended this past week rather mixed as demand and weather are supporting some crops, but not others. Winter wheat prices continues to pressured by harvest accelerating, while spring wheat and canola found strength on some technical factors and dryness in Western Canada. Despite some favourable long-term temperature & rainfall forecasts for most of the Midwest, corn and soybeans found small gains on optimism that China will start ramping up purchasing in order to meet Phase One trade deal targets.

This past week, top U.S. trade negotiator, Robert Lighthizer, told Congress that he’s confident that China will make good on the Phase One trade deal and purchase $36.5 Billion in U.S. agricultural goods (they’re at about $10B right now if we include sales AND what’s already sailed). If China does buy more American, then we should expect soybean prices to improve a bit. Also, hedge funds are sitting on a very large short position, so if there’s any significant demand – be it from China or the ethanol sector – short-covering could push corn prices up very quickly.

That being said, Mother Nature may not be on the corn and soybean bull’s side as the most recent 3-month outlook from the NOAA says conditions are going to be decent. In it, expectations are for above-average temperatures AND precipitation over the next 3 months for most areas of American crop production regions. The NOAA noted below-normal rainfall could be seen in parts of the Northern Plains and Pacific Northwest though. 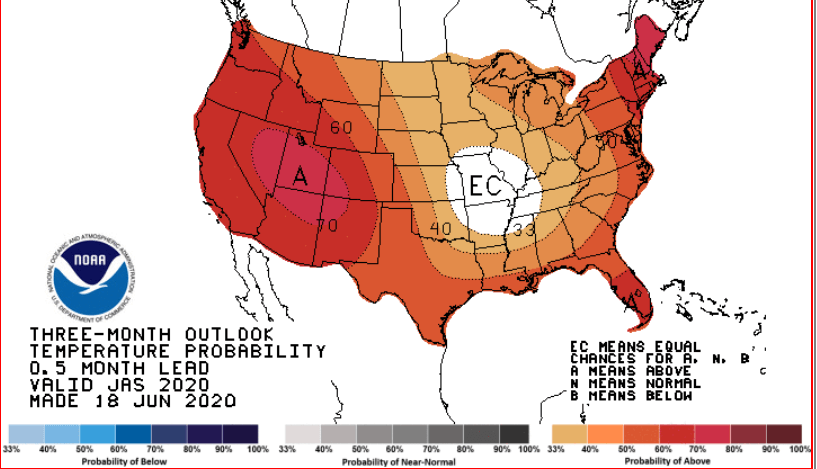 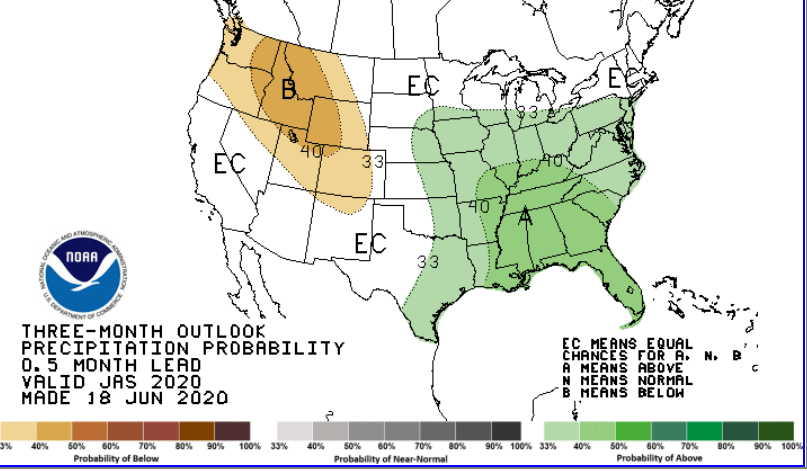 Conversely, dryness in parts of the U.S. Northern Plains and Western Canada is being monitored closely, especially by the many fund managers who still hold large short positions in Minneapolis HRS wheat and canola futures. Over the past 90 days, parts of central and southern Saskatchewan have received as little as 35% of their usual precipitation. Parts of Manitoba got some heavy rains this week, unfortunately flooding more than a few fields. In southern Alberta, irrigated areas that rely on the Milk River won’t have the same luxury this year after infrastructure failed in Montana that diverts water north to Canada failed. 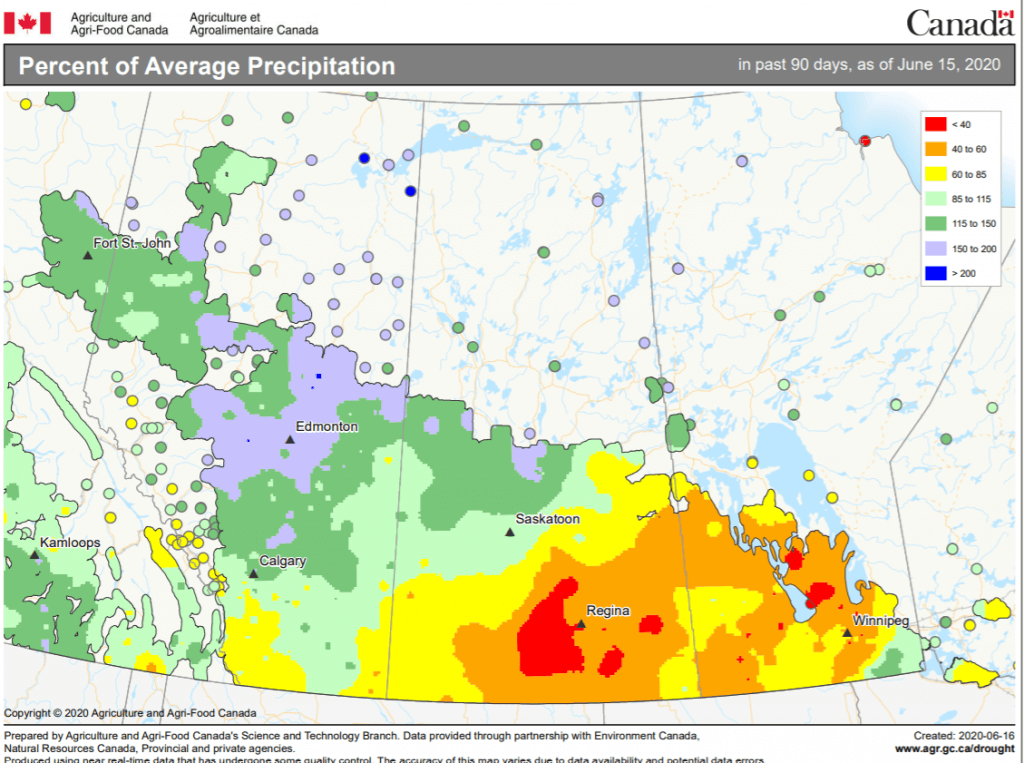 Putting pressure on canola prices though is the most recent 2020/21 production forecast from ABARES, which estimated Aussie farmers will pull 3.25 MMT off their paddocks. This would be a 40% improvement from last year, and while ABARES’ forecasts the last few years have been downgraded after their initial June estimate, that probably won’t happen this year because of the healthy rains that the country continent has received. 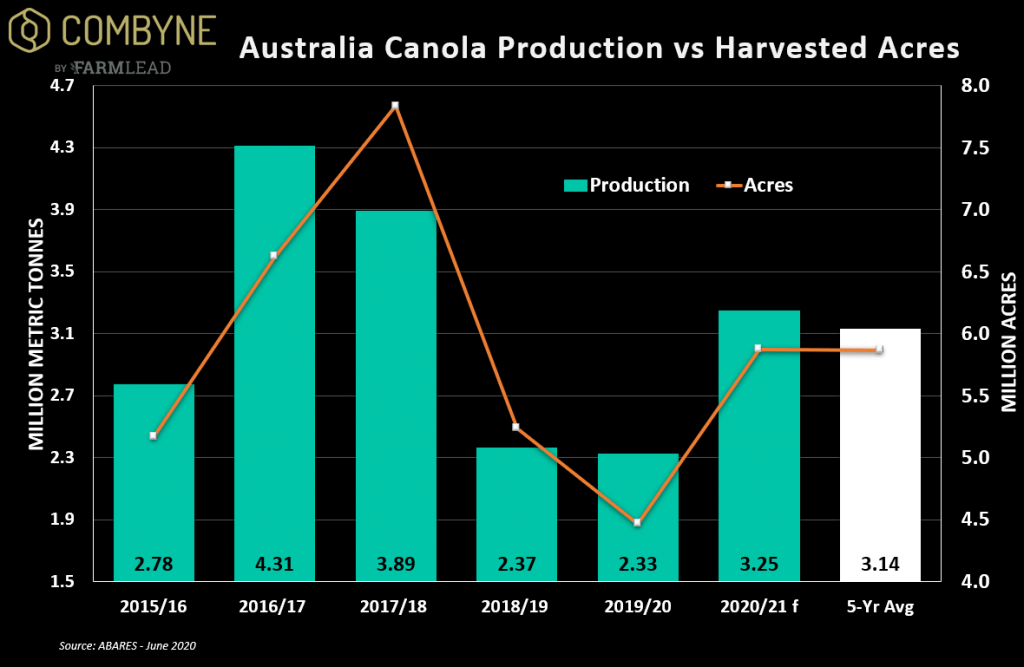 Inherently, this means more competition for Canadian canola to not only Europe, but also China. In true Sun Tzu (author of Art of War) fashion, the Chinese could certainly buy more Australian canola quietly, despite the very loud pushback against the Australian barley industry (somewhat similar to how we’ve seen Canadian pea exports to China explode despite the diplomacy issues related to canola trade).

On that note, ABARES said in their updated forecast this week that Australian farmers will produce 10.56 MMT of barley in 2020/21, a 17% jump year-over-year. However, the Grain Industry Association of Western Australia lowered its estimate of barley acres in their region by an eighth, down to a little more than 4M acres, which is still slightly above ABARES’ estimate of 3.95M for the areas 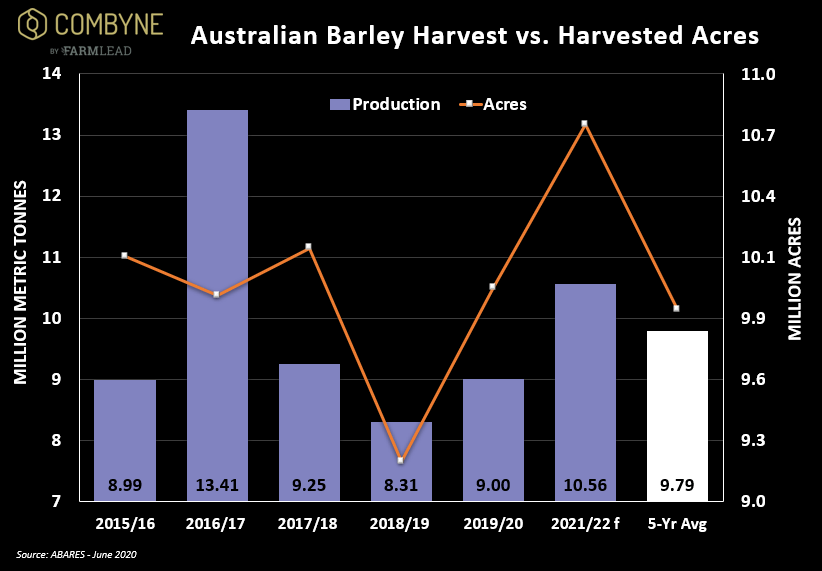 Worth noting is that we have seen a pick-up in Canadian barley exports, as now only tracking about 10% behind last year with 1.86 MMT sailed through Week 45. The timing is healthy, given all the production and trade question marks, but railroads are moving more cars of grain these days than in recent memory. Canadian wheat exports are also in a similar boat, as we’re now just 6.5% behind last year’s pace with nearly 15 MMT sailed. Worth noting is the year-over-year comparison of weekly shipments in the chart below and how much better we’re moving product right now. 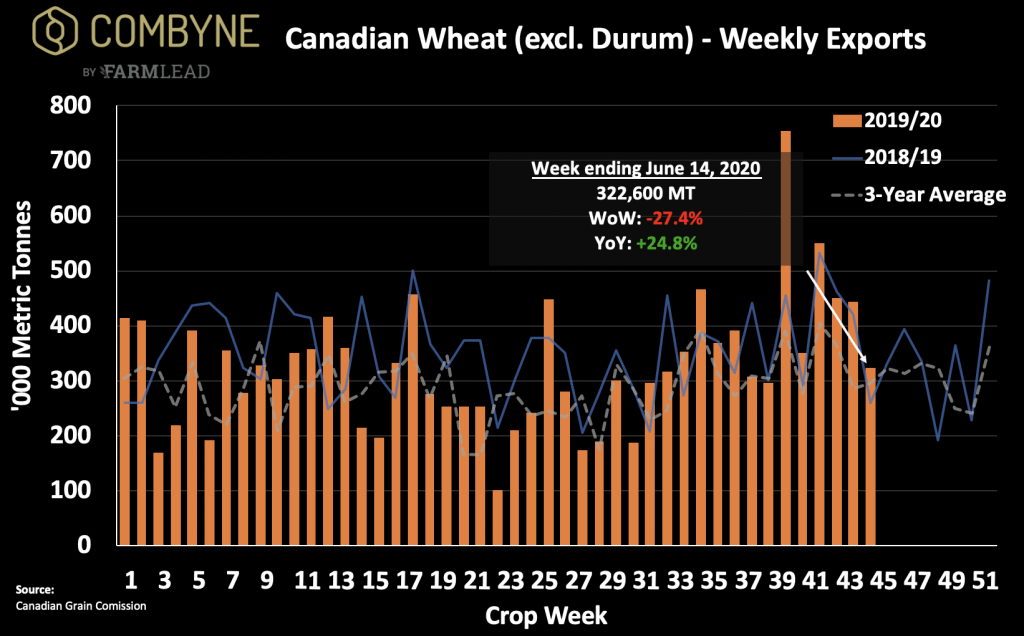 On that note, the Russian government shared this past week that their wheat exports will be quota-free until at least December but quotas will be likely introduced for the second half of the crop year (January to June 2021). The restrictions are meant to allow for the domestic market to have enough wheat and not see food prices increase (read: food inflation).

What this basically translates to is Russia will oversupply the world with wheat for the next 4-5 months, with the usual destinations being Asian and Middle Eastern markets. Thereafter, Australia will probably help fill a few demand holes, and then we’ll see the seasonal hand-to-mouth buying that Asian millers have reverted to these last few years. That said, ABARES sees Aussie wheat production climbing 76% year-over-year (!!!) to 26.7 MMT so they’ll have much more ample supplies in the 2020/21 wheat export game.

Ultimately, weather and Chinese trade issues continue to top headlines and attention from traders. Without significant moisture relief for crops in Western Canada, I expect weather premiums continue to build, but this is a double-edged sword. As soon as rainfall event happens, any elevated prices will surely be erased (they always are), and so I continue to reiterate my call made on RealAg Radio this week, that you should be putting in those old and new crop targets now. We did seen some action on Combyne this past week in this exact sentiment, as volatility in futures & currencies have allowed buyers to snap up the prices that farmers are posting on our Marketplace.