Grain markets ended the week mixed as a stronger U.S. Dollar led to some profit-taking on Friday, somewhat capping the substantial gains made in soybean prices. Conversely, wheat prices were set to close positive for the week but Friday’s strength in the U.S. Dollar, profit-taking, and increasing winter wheat harvest activity turned the complex red. Finally, corn prices traded sideways this week as traders hummed and hawed over how much good or bad the dry weather in the forecast is going to be; some say it’ll help get the crop going, others are worried it’ll kill seeds off before they even get a chance to get going.

Also supporting soybean prices this past week was the 183.4M bushels that the USDA said got crushed in April. This beat pre-report expectations is a 7% improvement year-over-year, but it is also a pullback from the 192.1M bushels of soybeans processed in March. On the flipside, the aquaculture industry has been a shining light for soybean demand fundamentals but the bulb is burning out. Considering that there’s been a 70% reduction in seafood sales globally since COVID-91 started, there’s way less fish that need to be produced, and thus, less demand for soymeal, which is the main protein ingredient for aquaculture’s feed rations.

Again, the big buzz this week in grain markets was largely focused on soybeans, specifically the ménage à trois between the United States, China, and Brazil. Despite the U.S. Dollar recovering some of its losses from the last 2 weeks, U.S. port soybean prices are still cheaper than Brazilian port soybean prices. Thus, it was confusing to see headlines this week about China telling its state-grain buying agencies to stop buying American, but then they ended up buying a lot of soybeans from the United States. That said, stronger basis levels in Brazil suggest tightening supplies there (despite the fact that we’re only a few months removed from their harvest!).

On that note, Brazilian soybean exports were forecasted to be a record for May of 15.5 MMT, which would be a jump of 55% compared to May 2019. This would also push shipments for the first 5 months of the calendar year to another record of 50 MMT – for perspective, currently, the USDA is forecasting total Brazilian soybean exports to top 84 MMT. Ultimately though, a bumper harvest, combined with a weaker Real there have pushed up domestic soybean prices to hover around record levels. Accordingly, it’s tough for Brazilian farmers not to sell both the crop that just came off, as well as their 2020/21 crop, which won’t get planted until September.

Ultimately, with one calendar quarter (13 weeks) left to go in the U.S. soybeans’ 2019/20 crop year, total shipments are tracking just 3% higher than last year, with 35.92 MMT sailed (or 1.32 billion bushels if converting metric tonnes into bushels). Obviously though, as you can tell from the chart below, actual shipments of U.S. soybean exports have slowed down significantly over these last few weeks. 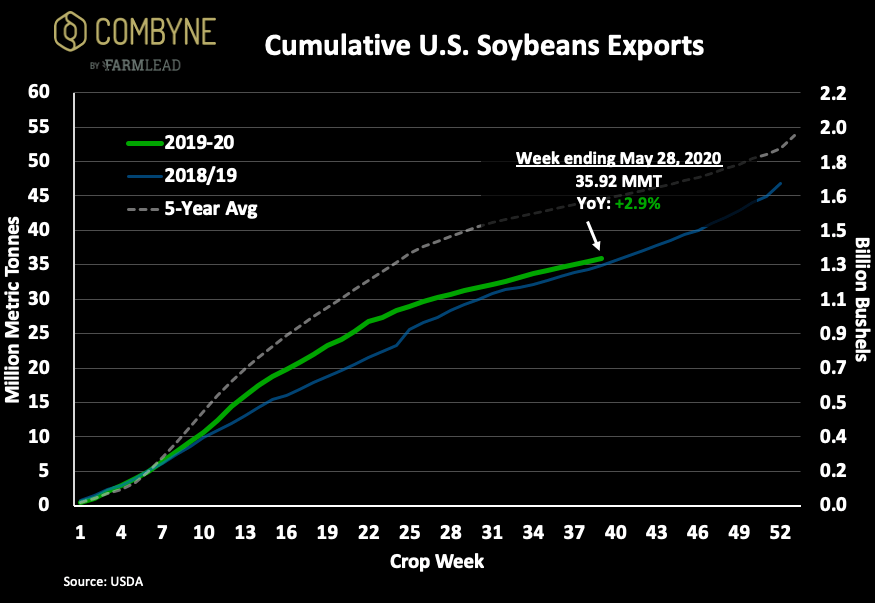 Similar to the Brazilian Real, the U.S. Dollar’s slide has helped the Canadian Loonie appreciate back above 74 cents for the first time since early March. This is an impressive improvement from the low of 68.2¢ USD that the Loonie hit back in mid-March (it fell by nearly 10% in 2 weeks), but with oil prices improving again, this has helped the Canadian currency make up some this lost ground. Obviously, this is detrimental to the international purchasing power of buyers of Canadian agricultural exports, and this is why we’ve seen canola prices pull back over the last few weeks. 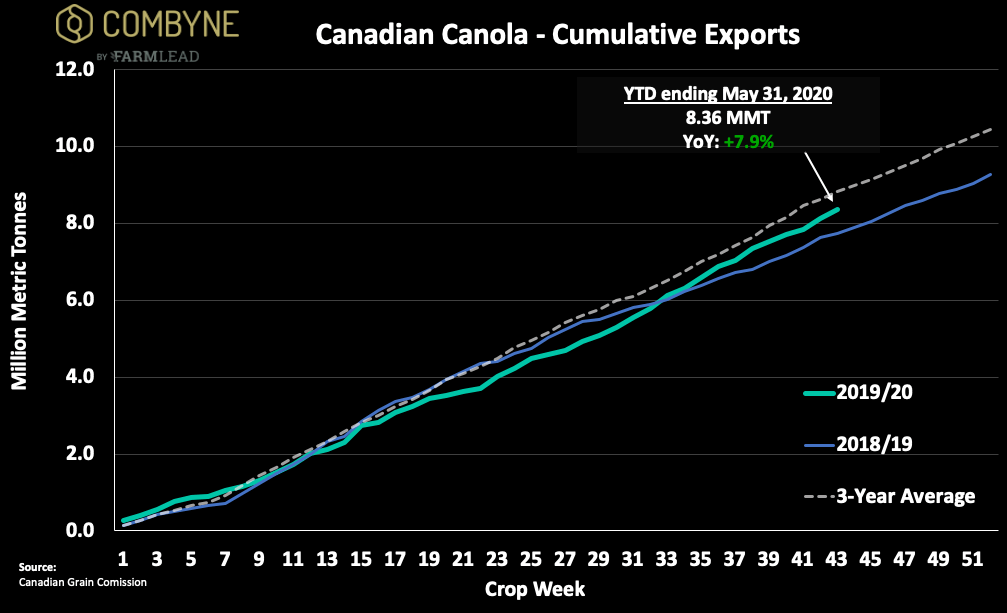 Nonetheless, with no protests to impede rail movement in Canada, port shipments are moving along quite nicely. In terms of forward-looking expectations, we are likely to see more lentils head to the West Coast as India has temporarily decreased its tariff on lentil exports from Canada from 33% to 11%. However, the tariff will go back up in a few months and thus, I remain uber-cognizant of the downside risk in lentil prices, especially given expanded acreage in Western Canada and good monsoon rains forecasted for India. Accordingly, I’ve made more incremental, 10% sales this week for both old and new crop lentils to move to 100% and 55% respectively. With nearly 40 credit-verified lentil buyers on our free Combyne Marketplace, listing your old or new crop lentils on the platform is a smart grain marketing play.

Another crop I’m seeing more downside risk for is flax. While StatsCan said in their asterisked estimates in early May that Canadian flax acres would be very similar to last year at nearly 942,000, conversations that I’ve had with farmers and buyers alike suggest this number is likely going to eclipse 1M acres. However, while acreage is increasing, available inventories are down. StatsCan said that, as of March 2020, available flax supplies in Canada were estimated at just 263,000 MT. This is a 13% drop year-over-year and 35% below the average flax supplies available at that time over the last 5 years. 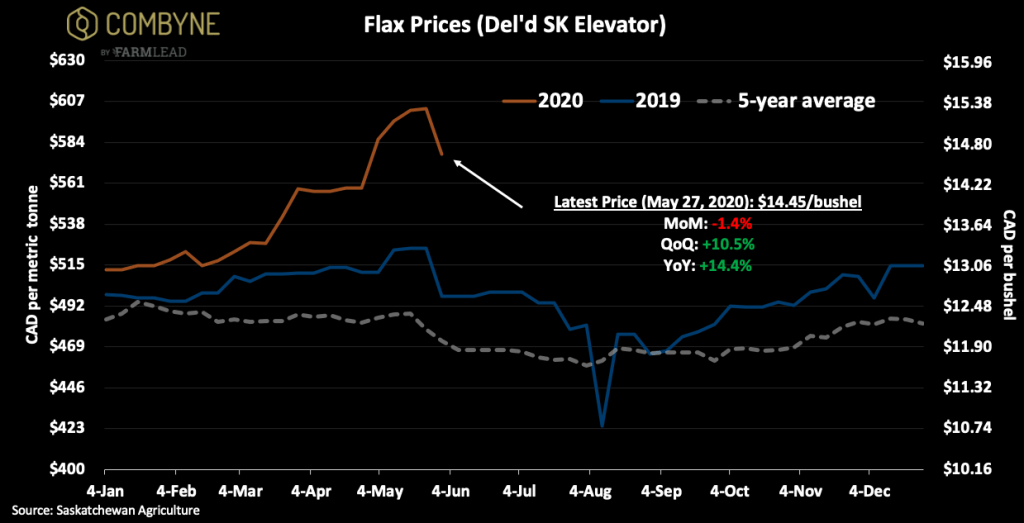 Inherently, there’s less flax in Canada that’s being carried over into the 2020/21 crop year, and that’s supporting flax prices. In the U.S., it’s a similar dynamic for flax prices as values are up nearly 20% year-over-year. While there’s been no official update from the USDA yet in terms of remaining American flax inventories and/or 2020 U.S. flax acreage, but some private estimates I’ve seen suggest something similar to last year at around 300,000 acres and total production above 150,000 MT.

Finally, in the wheat complex, combines are starting to roll across the Black Sea and U.S. Southern Plains, which is putting fresh supply pressure on wheat prices. Conversely, there’s still bullish factors out there including export restrictions from the likes of Ukraine and Russia. While I doubt we’ll see any of the pressures tomorrow or over the next 2-3 months, it could rise up the longer COVID-19 restrictions stay in place. Further, while many analysts are lowering their production estimates to multi-decade lows for the EU wheat harvest, good rains this past week will likely save the region from further yield reductions.

To round things up, I wanted to share some personal reflections that I’ve had over the past week, given all the sad but determined images and videos that are engulfing my social and news feeds. The events unfolding over these past few months – and especially the last few days – are a true test of leadership, of our society, and our humanity. A few weeks ago, “The Small Work in the Great Work”, by Victoria Safford, was shared with me and from it, this line caught my attention, “Every day offers every one of us little invitations for resistance… and we make our own responses.”

Each of our lives are uniquely complex and flawed, but in each day, lies the possibility of redemption and progress. All of our lives are different, and yet, they’re the same as we come together to create and develop, both at a personal and professional level. We all have struggles; but the strength of a team and that of a society is defined by its ability to build each other up, especially when it feels difficult to do so. This is an ongoing journey which has many ups and downs, but the choice is yours whether to move forward today or not. Therein, I hope you consider erring on the side of progress.

Relatively Steady Stuff — This Week in the Grain Markets

Grain Market Moves this Week: It’s Not All Politics