The Grain Farmers of Ontario (GFO) have released a second video outlining the organization’s displeasure with the Trudeau government’s agricultural policy in comparison to the United States.

The video titled “Does Justin Trudeau want Canadians to rely on the United States for our food supply?” is 30 seconds in length and focuses on the ad hoc direct payment programming that U.S. soybean and corn growers have received, raising questions about Canada’s competitiveness. (Story continues below video)

“Almost two thirds of grain farmers in Ontario are worried they cannot survive this downturn, and Justin Trudeau doesn’t seem to care,” says Markus Haerle, chair of Grain Farmers of Ontario. “We cannot compete with the low prices U.S. farmers can sell for, given the U.S. government’s $22 billion in subsidies to farmers. We have our farmer-members facing $130 to $170 per acre loss, before taking one cent of income on every acre of corn.”

Grain Farmers of Ontario has been meeting with federal government staff for months to raise issues facing the grain industry during the COVID-19 economic shutdown.

“We are taking this next step in the campaign to let the Canadian government know before it’s too late for Canada’s food supply,”Haerle says. “If Trudeau doesn’t put in safeguards for our food system, and Ontario loses farmers, will we have to turn to the U.S. for food? I think that is a question everyone should be asking.”

The GFO executive has not yet talked directly with the minister regarding the two videos but, “[they] have met with her staff and we are open to more meetings and to meeting with the minister directly,” Haerle says.

After the release of the first video, there was mixed reaction across the country regarding the tone and content of the ad. 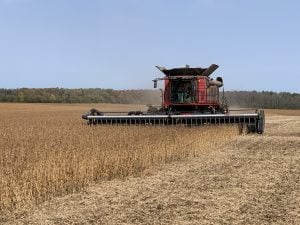 We know that phosphorus (P) and potassium (K) are needed in soybeans to achieve those high yields. But what's the right soil test level of each of these macronutrients, what happens when there's too much or too little, and how does that level affect soybean yield? To answer these questions, RealAg's Bernard Tobin is joined…Read more »

Getting Ahead of the Curve: A U.S. Perspective on Beef Advocacy