Every field is an ecosystem — complete with hosts, habitat, pests, and predators. Farmers are focused on fostering the best conditions for the desired crop and are keenly aware of threats, such as insect pests. But, as with any ecosystem, the removal of any one part of the system has dramatic impacts on others.

In this episode of Pests & Predators, we hear from Dr. Haley Catton, research scientist in cereal crop entomology at Agriculture and Agri-Food Canada (AAFC) based at Lethbridge, Alta.

Catton says that in any field there are hundreds of different species of insects, and a few of them are pests, but there are so many other insects in that same field that are actually providing value for farmers. Insects could be eating pests, for example, or they could be recycling nutrients, or helping with pollination.

Catton’s research focuses on biological pest control, where she studies insects and arthroprods that eat pest insects. Her goal is to try and put some level of economic value on the services that beneficial insects and arthropods provide. When a producer has a decision to make about whether to spray a pest or not, this information will help put a value of the services that will also be eliminated in addition to the pest.

“When you spray out a pest, you also spray out the beneficials,” says Catton. If more information is available to producers about how much a beneficial insect may be worth economically, it will help them make a more informed decision on pest control, she says.

As an example, Tetrastichus julis, or T. julis for short, is a tiny parasitic wasp, two to three millimetres in length, that parasitizes cereal leaf beetle larvae, providing an alternative to chemical management of the beetle. Instead of spraying an entire field, farmers can save time and money if T. julis is present, because it can “surgically remove it from the field,” says Catton.

Entomologists across the Prairies are trying to raise awareness of small beneficials, like T. julis, that provide huge services in terms of pest control.

Catch the full conversation between Shaun Haney and Dr. Catton below (story continues below player):

Cereal leaf beetle itself is a pest insect that originated in Europe, moved through the southern U.S., and made it to Alberta in 2005. Once cereal leaf beetle was found, Dr. Héctor Cárcamo, a colleague of Catton’s, started rearing T. julis wasps, multiplying them, then sent them to producers with cereal leaf beetles in their fields.

“A classic problem in biological control is an agent works too well and it kills itself out,” says Catton. “But wherever we are finding cereal leaf beetle larvae, in the past, we are finding T. julis with it,” suggesting that the populations appear to be in balance with each other.

Catton is currently testing samples for the level of parasitism of cereal leaf beetle larvae by T. julis to possibly determine a dollar value. “Some fields have zero parasitism, some have about 80 per cent,” she says. Instead of immediately thinking of spraying cereal leaf beetle, Catton advises “Wait a minute, you might already have something killing them that will save you money.” 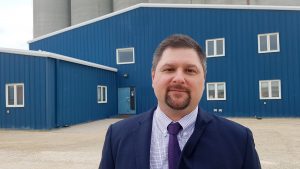 Third party inspections and the role of the CGC: grain companies seeking changes in the Canada Grain Act review

Grain companies have laid out their priorities for the current review of the Canada Grain Act, with consultations underway until April 30. There have been multiple attempts to update the Act going back to the early 2000s, but they've all been derailed before reaching the point where the legislation was changed. As Wade Sobkowich, executive…Read more »

Organic Agriculture is Big Business, Too

CNN Focuses on the US Drought and Its Impact on Farmers

Where specialty nitrogen fits for canola