Grain markets took a pretty serious tumble to end the last full week of trading in June as beneficial rains fell, or are forecasted to fall on the large majority of North American growing regions. Thanks to said precipitation, the bearish players pushed corn and soybeans to fall every single trading session this past week, while Chicago wheat prices hit fresh 10-month lows on an accelerating winter wheat harvest in the northern hemisphere. Also pressuring commodities and, more broadly, stocks, was the surge in new COVID-19 cases around the world, but most notably in the U.S. and Brazil.

Rain is falling across the Midwest until early next week, limiting the amount of heat stress that the crop has to take on just as crops hit key growth stages, especially pollination in corn.

On that note, the USDA’s estimate of trendline yields of 178.5 bushels per acre off the 97M acres planted has many (including yours truly) scratching their heads about where corn prices end up if that materializes. The great ag economists at the University of Illinois’ Farmdoc Daily program has already tried to do some analysis of where December corn prices show up on the futures board, relativized against the yield scenarios.  As a reminder, the corn prices listed below are futures prices, which implies that cash corn prices will be even lower. Comparably, at trendline yields of 49.8 bushels per acres, soybean prices are more than likely to pull back below the $8.50 handle that we’re seeing on the futures board (and is usually a breakeven point for many producers). 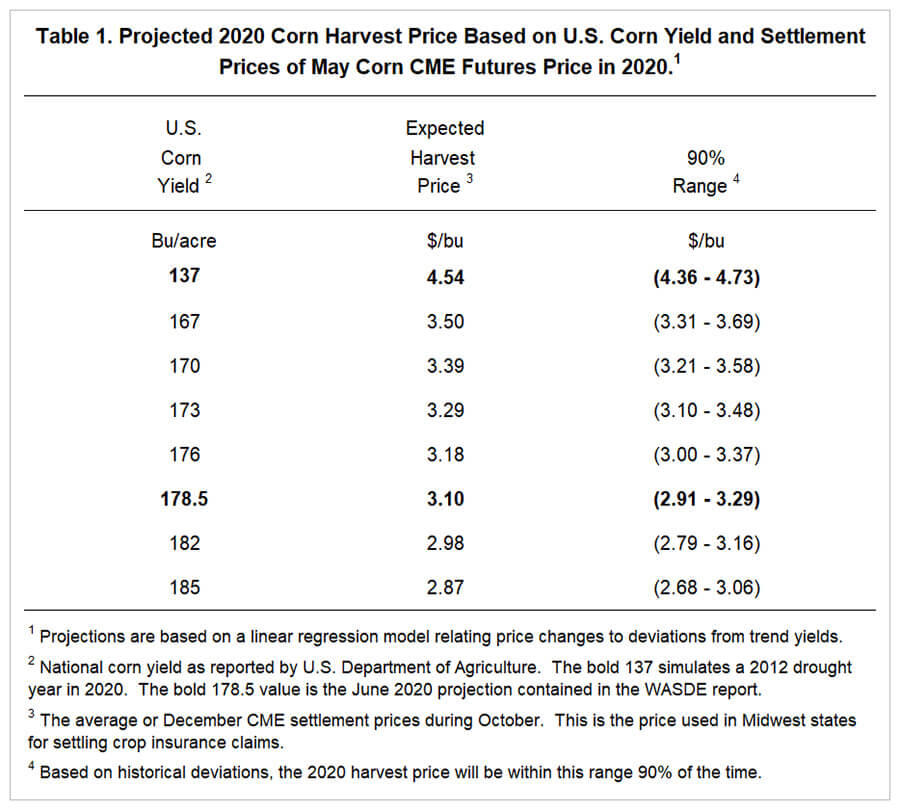 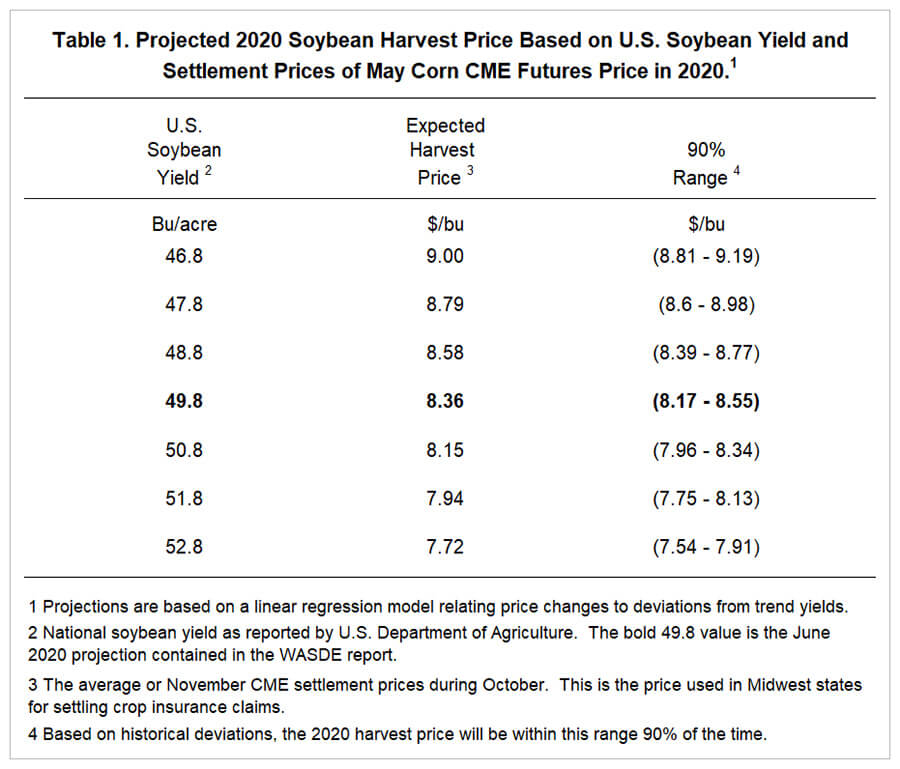 That said, these estimates of how soybean prices perform is also based on current known acreage data. On Tuesday next week, we’ll get the USDA’s June 30 Stocks and Acreage report, which, based on pre-report polling from Reuters, suggests soybean acreage could climb by about 1.2 million! More specifically, the average pre-report guesstimate pegs soybean acres increasing by 1.244M to 84.75, while corn acreage is expected to decline by about 1.672M to 95.32M total acres. Wheat acres are expected to climb by 364,000 to new area total of all types of just over 45M. For the grain stocks report, average pre-report guesstimates for corn stocks as of June 1 are 4.85B bushels (=14% YoY), soybean inventories of 1.4B (-21% YoY), and wheat supplies of 984M bushels.

While soybean prices did fall on the prospect of higher supply, some stronger demand from China could certainly offset some of this drop. So far in June, we know that China has bought about 5 MMT of U.S. soybeans, making up about 56% of all soybean exports sales over that timeframe. For perspective, up until this month, China’s purchases of U.S. soybeans had accounted for only 27% of all export sales, basically saying that in June, China’s doubled their pace of buying.

While some of this push is political, currency effects have been notable, with the Brazilian Real having gained about 5% in the past month against the U.S. Dollar, while the Greenback has lost about 3%. The result is that U.S. soybeans have been better priced, on a port-purchasing basis, than that from Brazil. Put plainly, it doesn’t take a financial wizard today to know what your cheapest sourcing option is between the U.S. and Brazil. However, there’s about 2.85 MMT of new crop beans purchased by the Chinese that could be canceled at any time.

And it’s certainly a possibility as it’s been done before and the political games are building up. The latest stunt from China is their demand that all boats of U.S., Brazilian, or Canadian soybeans be guaranteed to be free of COVID-19 and it’s potentially one of the angles to play to not have to meet their Phase One trade deal obligations (of which they have a long way to go, as showcased by the chart below provided by Bloomberg. To be clear, Beijing is not demanding that the personnel on the boats ferrying the agricultural goods be COVID-19 free, but the soybeans themselves. 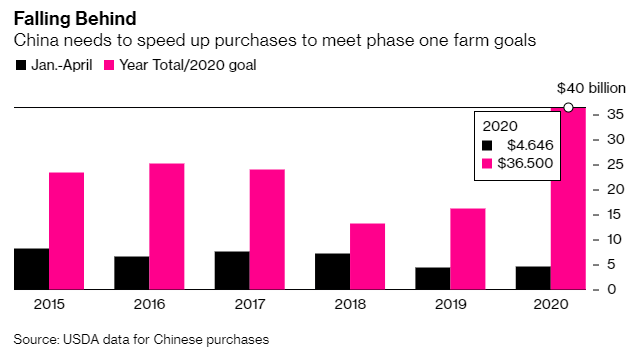 As a reminder though, China needs to ensure a stable food supply chain, as the well-documented history of famine within its borders has led to food security being a significant political priority. Simply abandoning the trade deal with the U.S. doesn’t make a lot of sense, as the current White House would more than likely amp up its criticism and likely respond with some sort of belittling trade measures. Nonetheless, even if China buys more soybeans, that demand will be likely offset by a bigger crop, as expected in Tuesday’s acreage report from the USDA.

On the flipside, a likely record volume of canola crush, combined with a stronger pace of exports has certainly helped canola prices. On the latter, everyone knows that the EU has started to buy more Canadian canola due to their politicized and environmental-related decrease in rapeseed production there. However, canola prices – both new and old crop – fell this past week, thanks to the area also receiving some rains. That said, if precipitation is limited in Western Canada or even the Midwest, but temperatures remain high throughout June, the bulls could take a quick run and provide one of the best selling opportunities of the year. 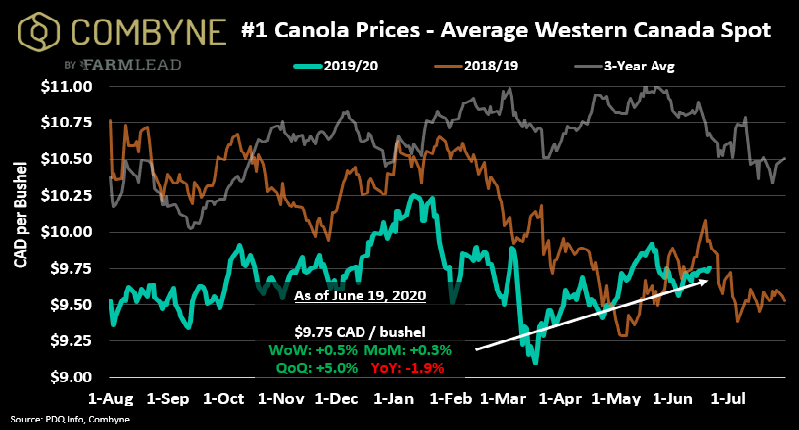 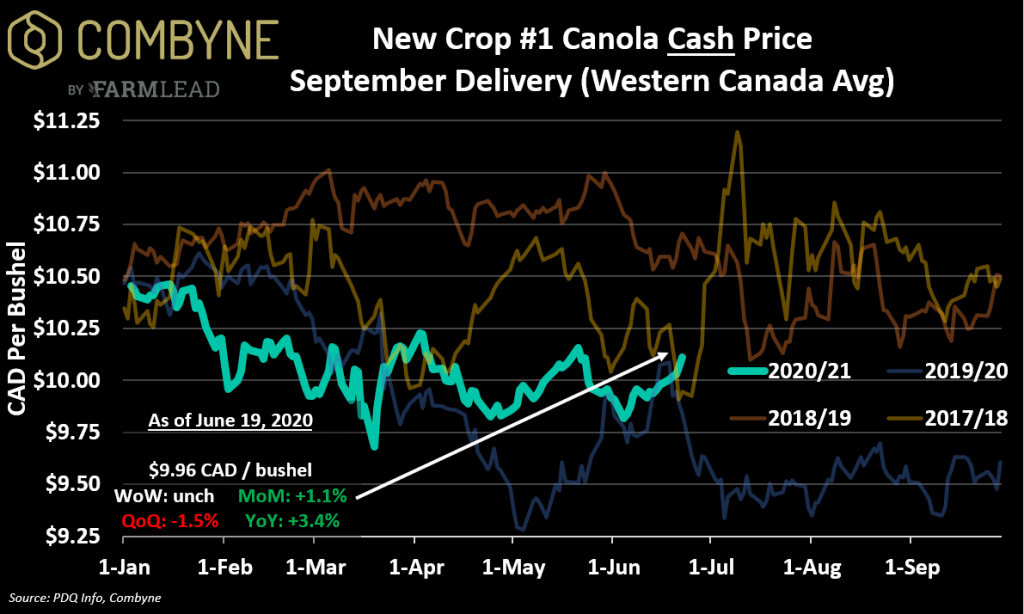 To close things off, the only certainty of the future is its uncertainty. Times likes these – livestock viruses, global pandemics, trade wars, etc. etc. – are causing extreme volatile and trying to bet that demand is going to be “usual” in a few months is no longer the sure-fire bet. Further, the only thing that rain does at this time of year is make grain, not grain prices rally. Of course, if it rained and rained and rained, that might cause a rally, but no forecasts anywhere suggest that.

My grain markets recap column will take a summer hiatus over the next few weeks, so have a great weekend, Happy Canada Day, and have an awesome 4th of July!