In the context of what’s going on in the world today, I have to say this is an absolutely tiny problem. But it’s also a problem that everyone involved would like to have fixed, and it’s fairly easy to do something about it. So here goes:

To start, this involves chickens, and news stories that have something to do with chickens. Specifically, the photos and imagery that are used to depict these chickens.

Why is it that reputable media outlets that strive for accuracy in their reporting all too often show the wrong kind of chickens in chicken-related news stories?

Take for example, this story published by Reuters on Wednesday. It’s about alleged price-fixing in the U.S. chicken meat industry (we also covered it on RealAg here). 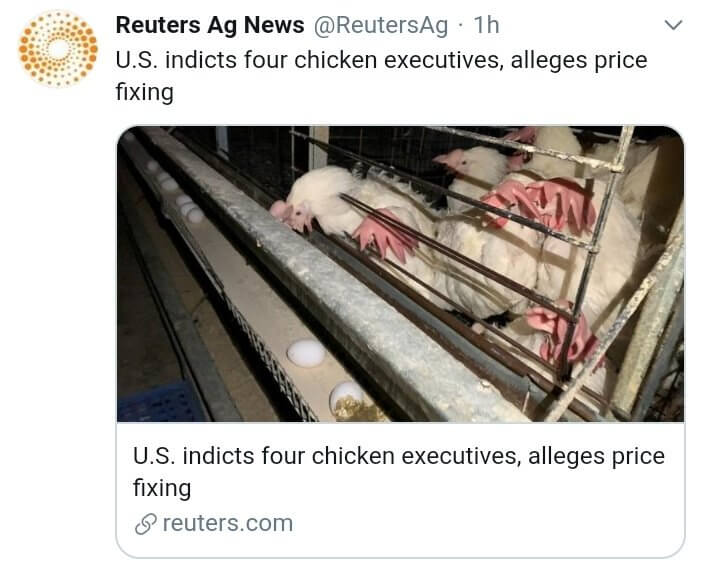 Chickens grown for meat are generally called “broiler” chickens. Never mind the dirty egg and the flash photography in a dark barn, which probably gave the birds a major scare, the stock photo they used shows “layers,” or laying hens, which lay eggs for eating and baking. These females were specifically bred to produce lots of eggs, not meat — the subject of the article.

Not to pick on Reuters, but their picture doesn’t fit the story. It’s like writing a story about the beef industry and showing a picture of a dairy cow (also not unheard of). A story about NASCAR featuring an Indy car photo. Or a picture of a Samsung phone accompanying a story on the latest iPhone.

This complaining about chicken pictures might seem like a trivial, personal pet peeve, as our family has had broiler breeder chickens for many years, but really it’s not just about chickens. The issue of accuracy in how agriculture and food production is depicted in media goes way beyond a poultry barn.

We’ve seen the same thing happen with news photos showing the wrong crop, or the classic — literally — old photo or clip of a 1960s piece of equipment that’s probably parked in a museum or abandoned in a tree line accompanying a report about modern grain production. The old red barn imagery also comes to mind. The vast majority don’t notice or care about these images, but these are the pictures their brains associate with these topics.

So why is it depicted inaccurately? 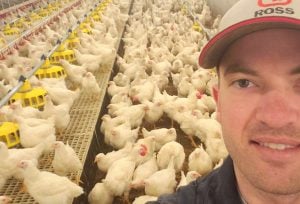 First, it goes without saying the percentage of people familiar with farming and food production is slim, and only a fraction of those people are familiar with a specific sector within agriculture, like chicken farming. I’ve tried explaining our broiler breeder farm operation (pictured) to expert grain farmers many times and most of them quickly appear as lost as someone who can’t tell a John Deere from a Case. It’s a huge stretch to expect journalists and editors to be familiar with different types of chicken farms.

Second, we haven’t exactly given reporters a chance to collect a library of images to use, especially on farms with strict biosecurity. There simply have not been many opportunities for photojournalists to take better pictures. And media can’t be blamed for not having pictures of something they haven’t been able to see.

One unintended consequence of not letting many people into barns is that there seems to be a disproportionate amount of photos in circulation showing backyard pigs and chickens, which are more accessible, but don’t accurately portray how the majority of pork and chicken is produced in developed countries. In some cases, media have even resorted to using agenda-driven photos from activists opposed to animal agriculture.

It should also be taken into account that newsrooms are running on ever-tightening budgets, and with the race to get stories online, it’s common to settle on a “good enough” stock photo before clicking the publish button, rather than take the time to go out and capture a current, more relevant image.

That being said, there are some things that could be done to help address this.

Reporters are always looking for contacts who are experts in a specific subject, which is exactly what farmers are. Rather than piling on mistakes after they’re made, we can be more proactive and offer to provide input when there’s an issue that involves our expertise. It might be as casual as sending them a “by the way” message on Twitter.

Farm groups also have an opportunity to facilitate the building of better stock photo libraries. Some news organizations have a policy of not using supplied photos, but not nearly all do. Producer groups or ag education organizations, even individual farms, could provide these visual resources with minimal investment. You really don’t need anything but a phone camera and a social media account (Flickr’s a good one for sharing photos.) Farm and Food Care in Ontario has done something like this with farmphotos.ca.

I can definitely relate to valuing the independence and privacy aspects of farming. And some things that happen on farms are sensitive and require a lot of context, so it’s not necessarily an easy question to say yes to, but would you consider letting a reporter take photos at your farm? What would it take? COVID has certainly helped everyone understand the basics of biosecurity, potentially making it easier to explain animal health rationale for only going in certain areas.

Reporters generally want to be as accurate as possible. There’s usually no intent to visually misrepresent what they’re reporting . It’s definitely an opportunity, as both the media outlet and people involved in farming and food production want to be trusted. Everyone benefits from having a picture that accurately depicts the true story.

Does “Gluten Sensitivity” Even Exist? Perhaps not

One thought on “Taking stock: news photos and how farms are depicted”