Grain markets were able to squeak out some gains this week, but corn prices were the obvious worst performer as the size of the impending harvest becomes better known. Wheat prices were able to earn a few pennies, thanks to hot weather concerns in North America and Argentina, while soybeans were supported by Chinese buying and an edible oils complex that’s feeling a bit bullish.

For me, to be honest, wheat prices are feeling a little top-heavy for this time of year. Specifically, Chicago SRW wheat prices are feeling very top heavy. As the chart below shows, in each of the last 5 years, we saw a rally sometime around late June to late July, before prices started pulling back dramatically. They don’t usually climb again until the fall and/or winter (I’m betting it’ll be the former this year due to COVID-19-related trade issues and/or heightened demand).

Yes, there are some heat concerns in southern parts of the Canadian Prairies and U.S. Northern Plains but it’s not all bad, and traders know it. I would posit that the strength of wheat prices is largely attributed to the strength of exports. As the weekly wheat exports chart below shows, Canadian wheat shipments have seen some of the best volumes all crop year in the last 2.5 months! Comparably, the total U.S. wheat exports are tracking fairly well so far in the first 7 weeks, with 3.42 MMT of all types of wheat sailed, up 1.2% year-over-year. This trend should likely continue for American wheat as the U.S. Dollar hit its weakest level on Friday since January. 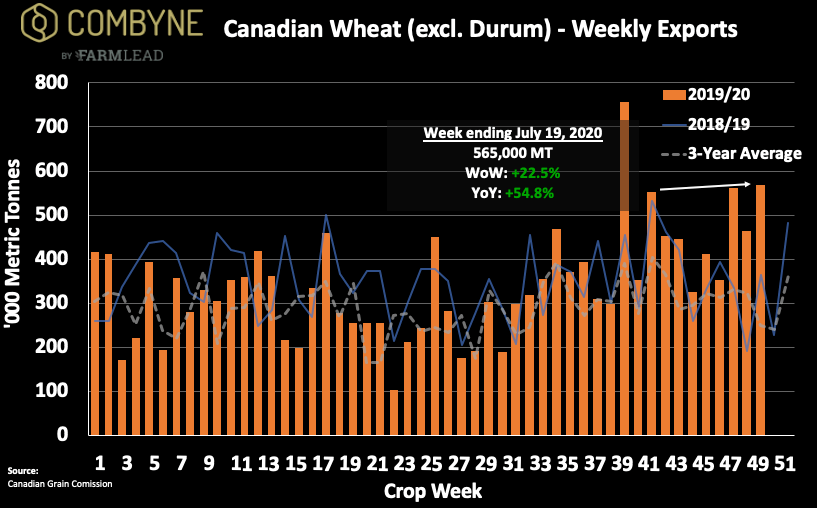 While I expect a seasonal reduction for wheat prices in the coming weeks, corn prices may have already started their usual drift lower. While, again, there are some bad spots everywhere, the combination of extreme heat and just enough moisture is starting to make this U.S. corn crop look pretty big. The only thing that might be saving corn prices right now is international demand, namely from China. 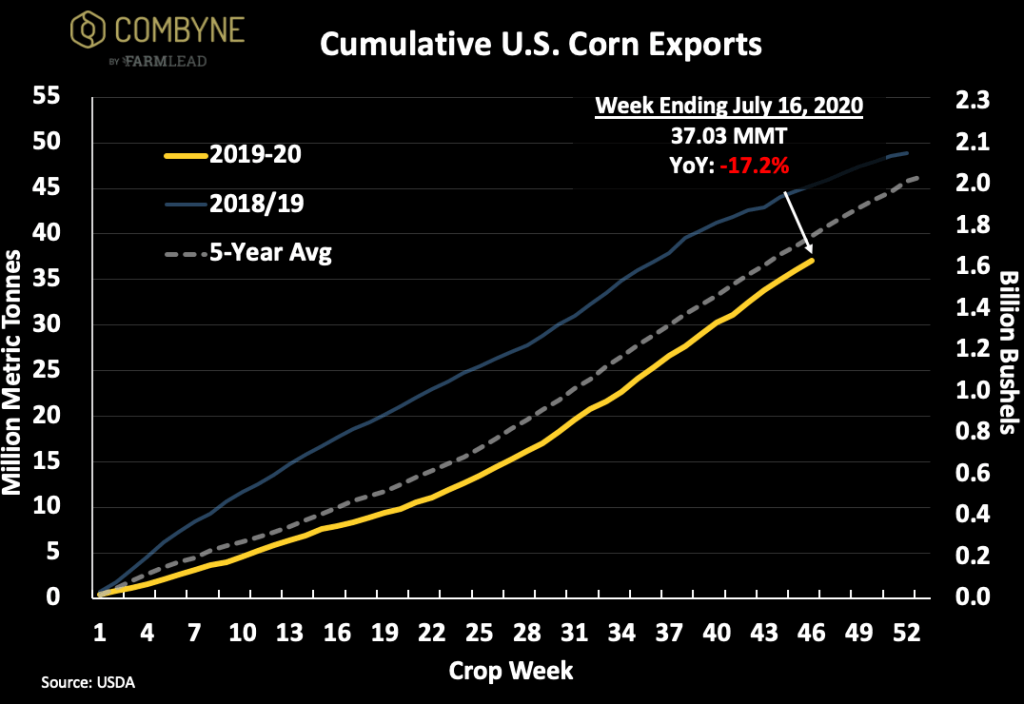 That said, China’s grain imports in the first half of 2020 have jumped enough that more analysts believe that the state grain buying agencies for the People’s Republic will use up all their corn and wheat quotas this year, something that’s rarely done. More specifically, through the first 6 months of 2020, China has imported 3.66 MMT of corn, or about 51% of its annual 7.2 MMT quota, compared to them using just 67% of said total quota in all of 2019. Furthermore, wheat imports are sitting at 3.35 MMT, 35% of its annual 9.64 MMT quota, which is already more than the one-third of the quota that Chinese wheat buyers bought in all of 2019!

Worth mentioning is the interesting fact that China has recently removed all quotas on imports of vegetable oils, including soybean oil and canola/rapeseed oil. This could be a positive for Canadian canola exports, in a round-about way (looking at you, the UAE). Putting this all together, some strong purchasing of U.S. soybeans by China, as well as weather-related disruptions to production of vegetable oils seems to be keeping a floor under canola values!

The other bullish news for canola prices though is that domestic crush volumes of the oilseed continue to be rocking along at a record pace. Combined with an accelerated pace of canola exports, the two main demand functions for canola prices are doing their best to support current values, if not higher. For canola exports specifically, with 2 weeks left to report of the 2019/20 crop year, shipments are tracking nearly 10% above last year at this time, with 9.66 MMT sailed. This likely means that the AAFC will have to raise its canola exports forecast from the 9.6 MMT just put out in mid-July!

In terms of 2020/21 demand, AAFC makes a pretty serious assumption that “European rapeseed production returns to normal following last year’s drought”. This doesn’t appear likely whatsoever though as recent estimates have pegged the EU rapeseed crop at 17 MMT, similar to last year’s production but the smallest crop in 15 years. Again, another indicator that AAFC will have to raise their forecast for old as well as new canola exports.

Thus, for canola prices, this boost of international demand should be supportive. While global vegetable oil supplies are generally adequate and could put some pressure on canola prices via reduced crush volumes, AAFC does believe a range of $480 – $520 CAD/MT will trade on Vancouver’s west coast, which has timed well with canola prices on the futures board keeping above $480. That said, these levels on the futures board have not been seen since February 2019! 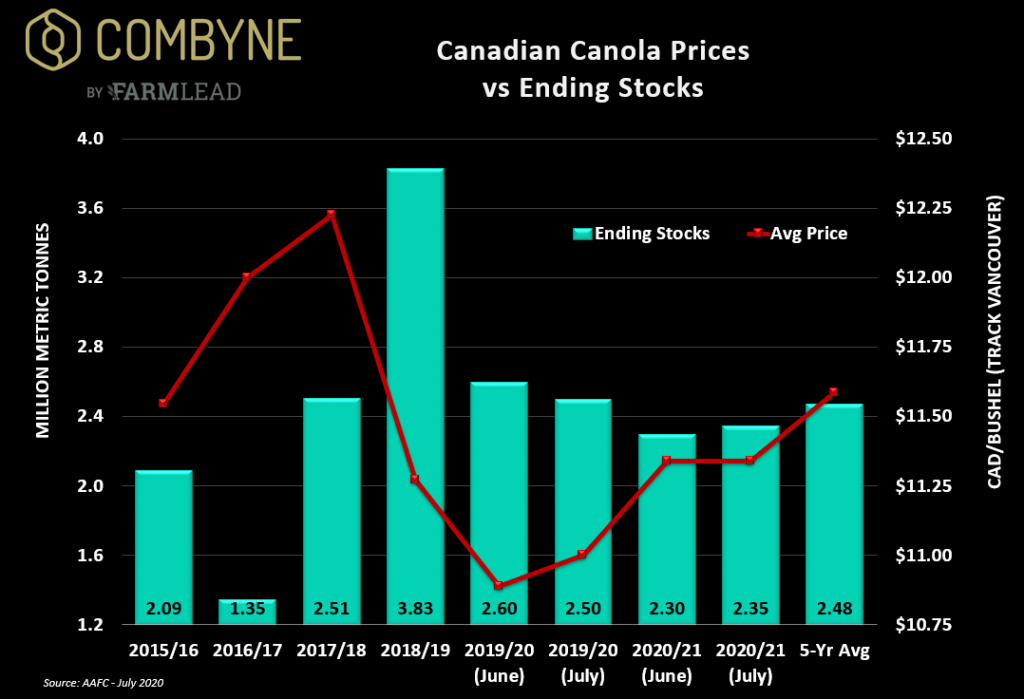 Of course though, Mother Nature holds the trump card when it comes to where canola prices go the next 8 weeks, but from where I’m sitting today, I believe the seasonal pullback that we see around this time of the growing season is inevitable as crop potential becomes more widely agreed on. And while this year has been far from normal, it’s undeniable that as the yield potential of the crop becomes more known, the trudge towards harvest lows is likely to ensue.

Have a great weekend and remember to re-apply the sun tan lotion in this heat!

Selling the Rumour — This Week in the Ag Markets