After a two-week hiatus, I’m back with the weekly recap and this week, grain markets ended things mixed.  Wheat prices were weighing weather and production downgrades, while corn and soybean prices remain concerned about demand, albeit these two did climb on Friday. For these 2 crops, China is certainly buying but it doesn’t seem like it’s enough to keep these markets higher, given the Harvest 2020 outlook right now. Wheat prices erased a lot of the gains they made earlier in the week; notably, on Wednesday, when Chicago SRW wheat futures hit a 3-month high.

So far in July, grain markets have been stuck in some ranges, despite all the trade issues, COVID-19 issues, and blatantly bizarre politics going on. That said, there’s more and more analysts who believe that weather might the only thing that could move grain markets out of said ranges. While the U.S. Corn Belt is getting hot weather for the next few weeks, the rains that have fallen in the first half of July are likely going to help crops there to handle the temperature stress. Conversely, after getting its own heat, Northern Plains states are going to get some welcome rains over the next week or so. 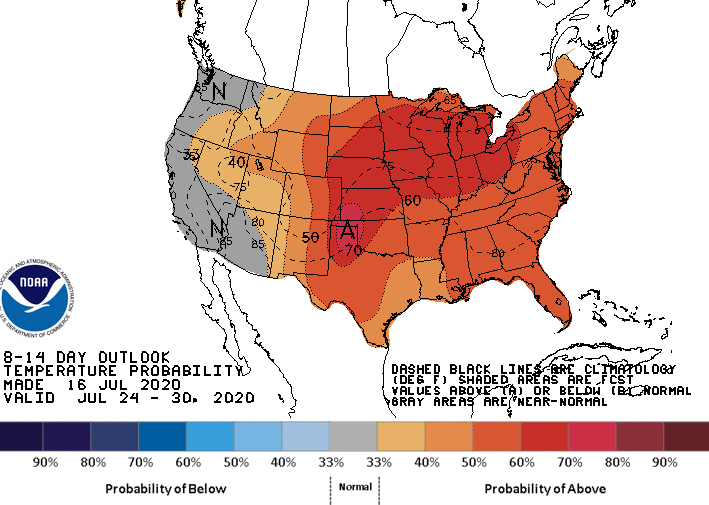 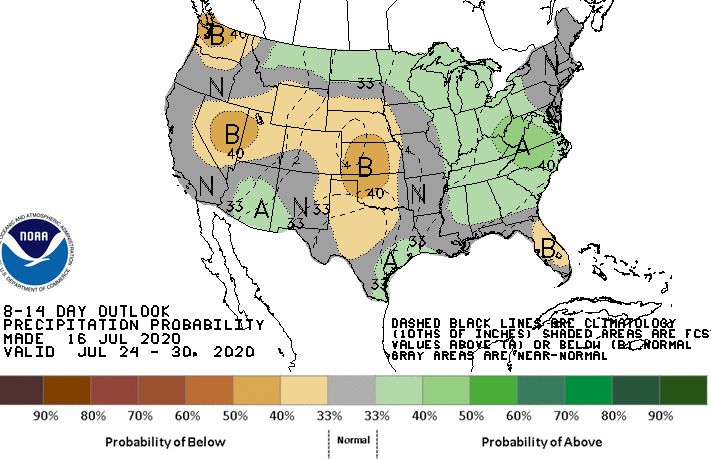 Quite honestly, I think that the rains this past week and the one prior were likely worth a couple billion bushels of corn. It’s also probably why, despite China buying a new one-day record worth of U.S. corn on Tuesday, corn futures actually closed lower by 3 cents! While we’ve seen two Top 3 corn purchases of all time in two weeks from China, it’s what sales that actually counts. With that in mind, with 2 months to go in the 2019/20 crop year, U.S. corn exports are tracking behind last year by nearly 20% with 36 MMT sailed. Further, it now seems more than likely that 2019/20 US corn exports will finish below their 5-year average. 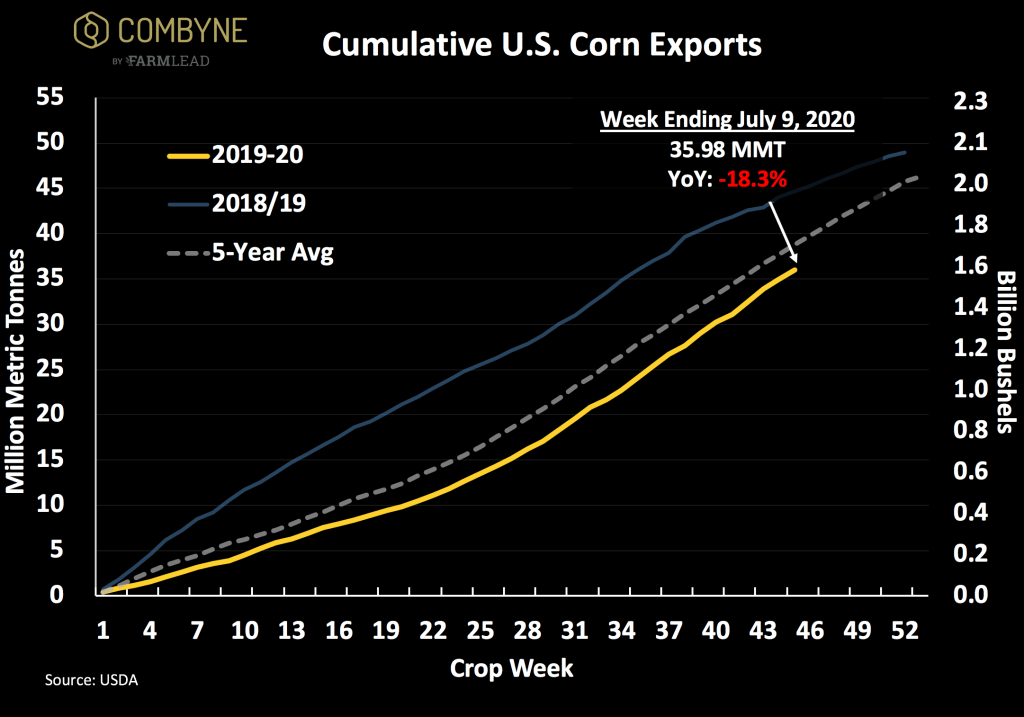 The other dynamic at play as to why corn prices have not pushed higher is largely because, traders know that a few large one-off purchases by China does not exactly equate to a trend. Further, it seems like these purchases are part of a broader, “See? Look! We’re buying!” initiative, slowly moving the needle to determine what will make the White House and President Trump content. How this appears to me is somewhat like a child, walking further and further away from their parents, testing to see how much they can get away with before being called out. While these large purchases are welcome, the market understands that they are one-offs and trust in China being a reliably consistent buyer of US corn exports (or other commodities) is quite low.

Conversely, based on Chinese import data for June, it does look like China remains to be a consistent buyer of Brazilian soybeans. Chinese customs data reported that 11.16 MMT of soybeans were imported in June, up 71% year-over-year and 19% higher than May’s volumes. More importantly though, about 85% of said imported soybeans came from Brazil, who reported a record number soybean exports themselves.

More specifically, Brazil exported 13.8 MMT of soybeans in June, 70%, or 9.66 MMT of which went to China.  Thus, with Brazilian soybean supplies tightening a bit, domestic soybean prices there are starting to climb and farmers are very sold: 91% of 2019/20 soybeans have been contracted by farmers (vs 76% average), and 36% of the 2020/21 soybean crop (which will be planted in late September), which is nearly triple the average.

Looking outside the U.S., some late rains are expected to boost yields for a few crops in Europe, namely rapeseed and corn. For the former, it looks like Europe will take off about 17 MMT of rapeseed, which would be the smallest harvest in almost 15 years! For some of the larger producers, it 2.8 MMT is expected out of Poland (+4% YoY) and 3.2 MMT from Germany (+14% YoY). However, the U.K. and France are looking at smaller crops compared to 2019, with the latter expected to combine 3.4 MMT, or a 4% fall from 2019 and a 30% reduction from the five-year average! 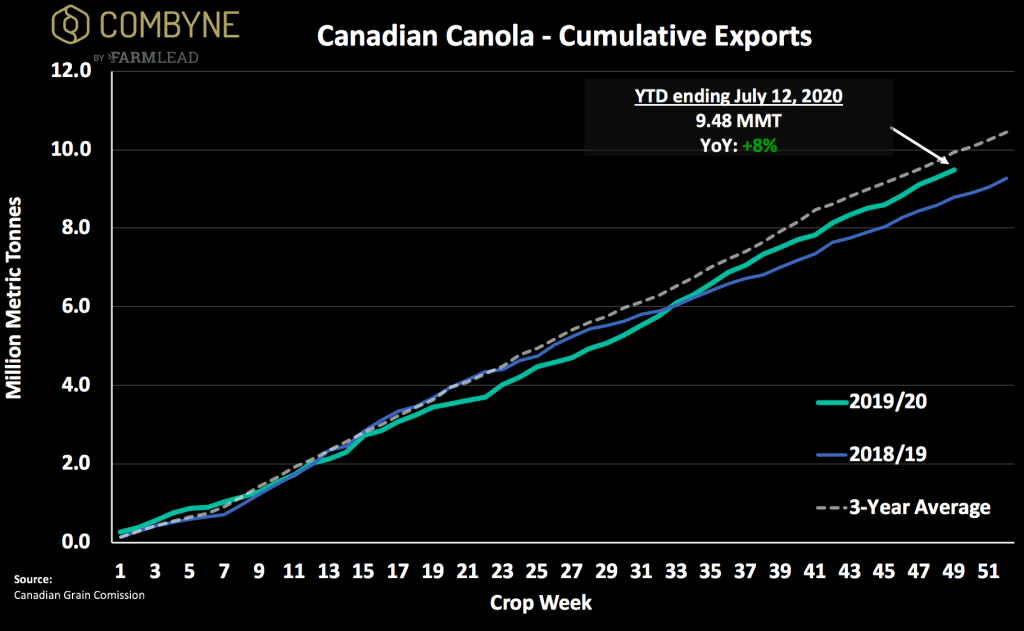 Currently tracking 8%, further, canola speculators continue to exit their short positions, now at their least bearish position in 6 months and looks like that trend is continuing this week, given the slight improvement in canola prices. Some extreme storms across Western Canada have certainly laid down a few fields, but should the photos of said fields on social media be an indicator of the entire crop?

The obvious answer is no, and that’s where we often see a divide in market sentiment: those who look at the front window (or social media’s window) and see conditions that should only move prices higher, and those who look at the bigger macro grain markets picture and recognize it’s not all bad. To be clear, I am the latter camp, which means that I don’t think the small uptick in grain markets will last much longer. However, as harvest pressure subside, we could see some much better opportunities in the late fall (read: November) or middle of winter (read: January 2021).

Finally, wheat prices found some strength this past week on production downgrades in Europe, the Black Sea, and Argentina. In Argentina, the wheat planting campaign is nearly complete, but it’s been quite and a mild La Nina event is expected to hit Argentina between September and December, challenging a wheat crop as it nears the finish line. Accordingly, this past week, the Argentine wheat harvest was downgraded by the Rosario Grains Exchange by 3 MMT to an 18 – 19 MMT range, while the Buenos Aires Grain Exchange says they’re likely going to cut their acreage estimate.

In Europe, Strategie Grains downgraded their estimate of the soft wheat harvest there yet again, this time by 600,000 MT to 130.9 MMT. If realized, this would be a 11.5% drop in production year-over-year, more than 10% decline that the USDA shared in their July WASDE report. Moreover, Strategie Grains shared in a note this week that “the level of projected stocks on the world remains very precarious.”

As discussed, it is important to look at the full picture and the reality is that it’s not all bullish in wheat markets as there’s been those aforementioned rains falling recently in Europe. While they have slowed harvest, it’s helpful moisture ahead of a fall planting campaign. Poland, is expected to harvest 11.7 MMT of wheat (+6% YoY), according to the USDA attaché there. Further, in Germany, the farm co-op there, DRV, raised their estimate of the country’s wheat crop by 300,00) MT to 22.5 MMT. While that’s still about 2.5% below last year’s wheat harvest, grain markets are acknowledging that’s it’s not all that bad.

One other major factor to consider is protein availability. So far in the U.S. winter wheat harvest quality assessment, average protein levels are sitting at 11.2%, below last year’s “disappointing” 11.3% average, and the five-year average of 11.7%. That said, it’s expected that more U.S. Northern Plains and even Canadian wheat will be making its way to millers around the country, and even abroad. One last point to consider: the combination of smaller U.S. spring wheat acres and expectations for weaker protein in Montana and South Dakota.

Have a good weekend!