It is no surprise that the numbers are not pretty, as the Liberals have attempted to rescue the economy with major support payments, just like other countries.

Finance Minister Bill Morneau has delivered the federal government’s fiscal update, which forecasts a deficit of $343.2 billion this year because of a sharp decline in tax revenue and massive emergency COVID-19 related spending. According to The Globe and Mail, this deficit figure “is almost the same size as total federal spending in a normal year.”

Although I understand the level of spending during COVID-19,  the way the prime minister talks to Canadians about the financial reality just rubs me the wrong way.

Who pays the taxes? https://t.co/IRZcDIBguD

According to BDO, the estimated costs of COVID-19 measures that are contributing to the federal deficit were projected as

In terms of overall debt, the numbers do not get any better.  The federal debt climbed through the one trillion dollar level for the first time ever, which is up from $716.8 billion in the previous fiscal year.

Watch my conversation with Christina Loren of RFD-TV on the Canadian fiscal update.

As I mentioned earlier, Canada is not alone in its COVID-19 spending spree. According to the International Monetary Fund (chart below) Canada lags some countries on additional spending as a percent of GDP and also loans, equity, and guarantees as a percentage of GDP. 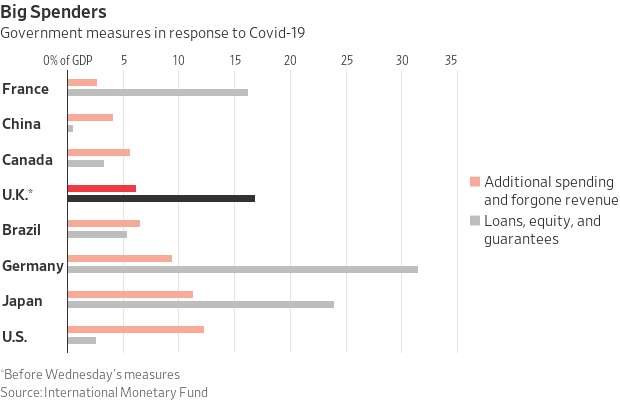 In its BDO’s Tax Alert (July 8) the debt load Canada is carrying has some historical context going back decades.

Canada had a debt-to-GDP ratio of approximately 30% prior to the pandemic which was the lowest of the G-7 countries.  The COVID-19 economic and health crisis will put incredible pressure on the nation’s finances for years to come, with the debt to GDP ratio now estimated to be 49.1% by the end of March 2021. The highest the debt-to-GDP ratio has ever been post-WWII is 66.6% in the 1995-96 fiscal year.

Although Canada is not through the COVID-19 pandemic, people are wondering about the future and the cost to future generations.

In a recent discussion with Glen Hodgson of the C.D. Howe Institute, the realities of the economic and fiscal situation create even tougher decisions going forward.

Government spending is going to cost a quarter of a trillion dollars which will lead to debt down the road, but “arguably this is something that had to be done,” says Hodgson. The challenge, he says, will be figuring out what the next step is. Hodgson foresees sales taxes and other new forms of revenues that from a federal standpoint will be an important part of the equation as the economy recovers.

The road ahead is riddled with health and financial obstacles that will come with great pains and sacrifices to overcome. I have no doubt Canadians are up to the challenge.