Grain markets took a nosedive in their first week of trading in August, as yield forecasts get updated,  weather pressures subside, and traders prepare for next Wednesday’s WASDE report. Put simply, the closer we get to combines rolling, the more of the supply number gets baked into the current prices. Reality is, that new JD X9 combine with all that extra capacity might be needed to help out with some bigger yields this year (However, with a fully loaded sticker price of $1.2 million, you’ll need a heck of a lot of bushels at these prices for your banker to sign off on it!)

Soybean futures in Chicago fell for four straight days to end the week as the aforementioned yield potential of the U.S. crop, as well as competition from Brazil weighed on the oilseed. Despite the largest one-day sale to China in 2 months announced on Friday (465,000 MT), soybeans still had a pretty rough week, falling to their lowest values since the end of June. While China technically imported 10.1 MMT of soybeans in July (+18% YoY), the majority of it is still coming from Brazil.

Looking forward, Brazil’s national grain exporting agency, ANEC, says that its members are expected to ship out 6.72 MMT of soybean exports in August. If realized, this would be a 33% jump compared to the same month a year ago, albeit, it would be below the 8.02 MMT sailed last month in July. As mentioned in last week’s grain markets recap, while Brazil is likely running out of soybeans for international buyers, it’s likely they’ll have another record soybean harvest to supply said customers starting in January 2021. 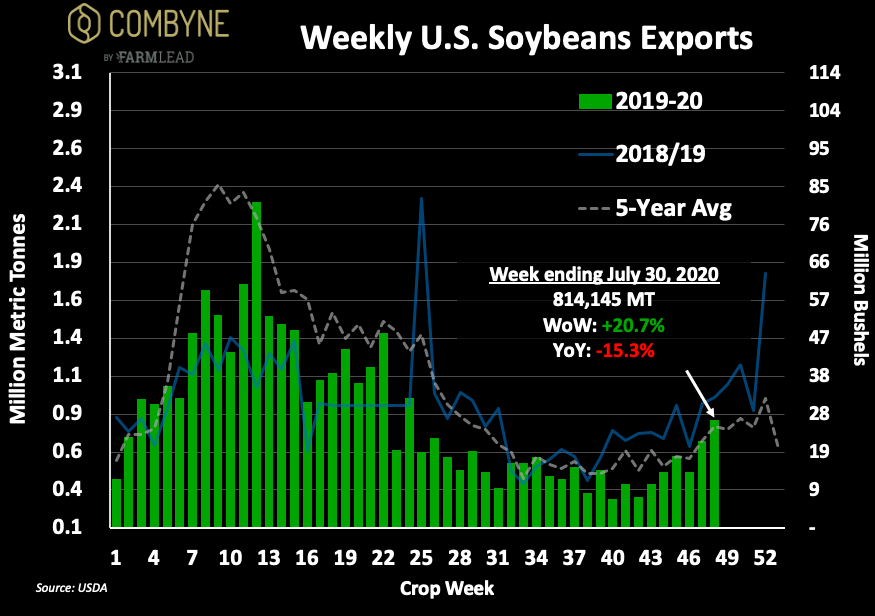 In the meantime, with 4 weeks left to go in its 2019/20 crop year, U.S. soybean exports are tracking about 5% behind last year, with nearly 40 MMT sailed. It’s more than likely we’ll see this different reflected in next week’s WASDE report. One variable that more analysts are looking at is currency effects, as the U.S. Dollar continues to weaken. With the weaker Greenback, will more buying happen? Or is the geopolitical tension between the U.S. and China too far gone for China to care about meeting their Phase One targets.

While the political tactics can be debated, what is not in question is how well canola prices and the Canadian Loonie have performed since bottoming out back in March. That’s not to say that the impact of COVID-19 on canola markets (or the Canadian Dollar) is over, but rather that the price rebound is presenting a decent selling opportunity at time when markets are usually pulling back. Quite frankly, limited competition on the railroads have helped canola exports soar in the past few months, with shipments ending the 2019/20 crop year at 10.12 MMT, good for a 9% bump year-over-year. 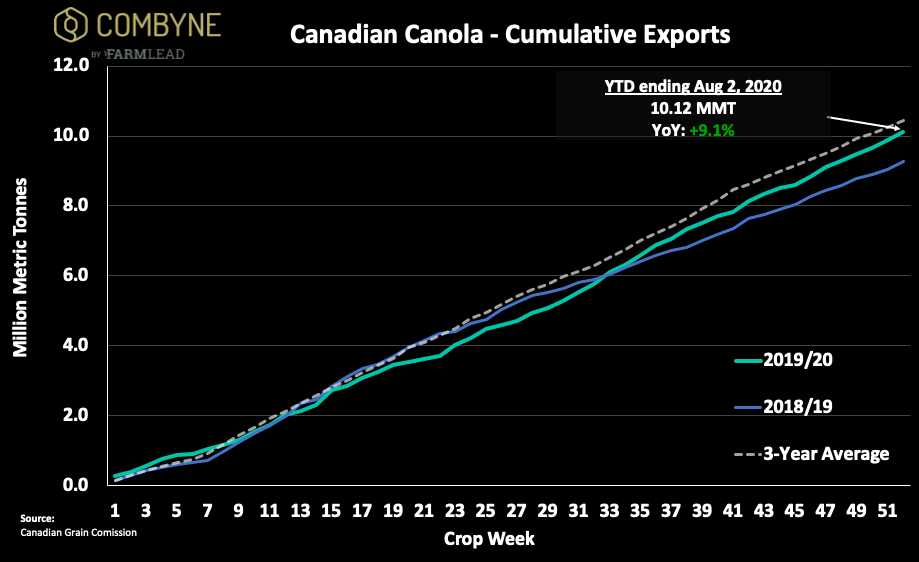 It’s a similar dynamic in the closing out of the Canadian wheat crop year, as a strong last few months of sailings meant total shipments (including durum) closed at 23.33 MMT, or 2.5% more than 2018/19’s volumes. The more interesting question, in my mind, however, is what happens once the Black Sea gets past their usual aggressive export campaign, which usually lasts through December?

One factor to consider is that Europe won’t have as much wheat to export this year as they did in the 2019/20 crop year. In France, combines are rolling and it looks like the country’s soft wheat harvest will drop by as much as 25% year-over-year to 29.2 MMT. Blame for the poorer yields is mainly because of the wet fall (which limited plantings) and then a dry spring (which limited crop development). However, because of the drier conditions, the quality of France’s wheat harvest is looking pretty good. 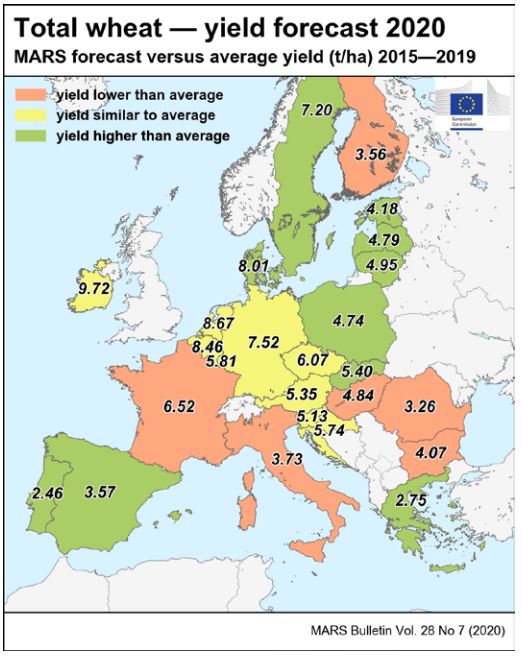 Elsewhere in Europe, the UK’s wheat harvest is expected to fall to about 10 MMT, down about a third, thanks to the same wet fall / dry spring weather combo that France received. Comparably, Ukraine and Romania’s wheat harvest are expected to fall because of just the drier growing season conditions, but, according to the most recent update from the EU’s MARS crop monitoring division, the wheat harvest in Germany, Russia, and Poland look to be similar to last year or the average of the last few years, thanks to timely rains.

What this all adds up to is likely less wheat exports coming out of the EU, as bloc countries look to first solve for increased domestic demand related to COVID-19. This intuitively means more wheat exports competition from the other major players like Australia, Russia, Argentina, Canada, and the U.S. As a lot of the U.S. wheat harvest is of the winter wheat type, it’s more likely to capture some market share from the EU. However, given trade tensions continue to grow with China, currency effects, and COVID-19-related trade disruptions, this increased shipping expectation is far from certain. Thus far, total U.S. 2020/21 wheat exports are tracking about 9% higher than the first 9 weeks of 2019/29, with 4.53 MMT sailed (or 166.5M bushels if converting metric tonnes into bushels). 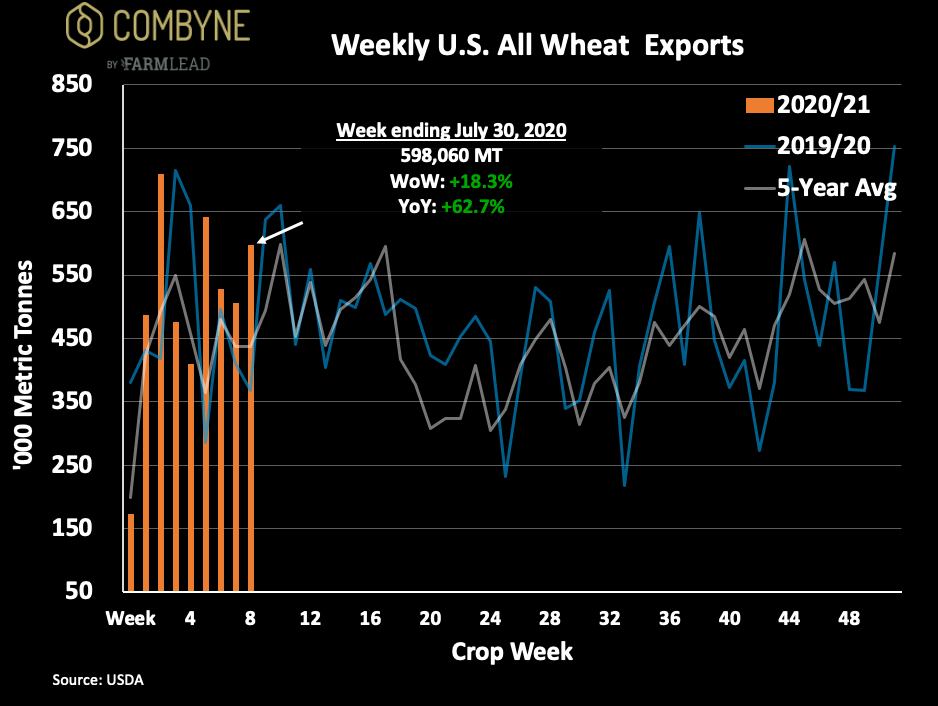 For wheat prices, we know that we’re getting into the time of year where values are almost always the worst of the year. That said, if you are selling wheat right now, it should only really be because you’re filling contracts that you made a few months ago, or you have really big yields and don’t have the storage capacity. Put another way, every single year, wheat prices at wheat harvest time aren’t great so why consider selling at that time?

To close out the week, there’s more buzz about crop tours these days, but I think I might be in the unpopular camp that they don’t matter any more. With satellite imagery and other data reporting functions, there is already a lot known about the harvest months before the combines even start to roll and thus, even before the crop tour participants trudge through fields. While it might help determine a bushel here or there, let’s be honest, by the middle of August, crop yield potential is fairly known. Otherwise, why do grain markets historically pull back, the closer we get to harvest? And this sort of selling pressure really showed its face this week.

Sure, there are some anomalies to the seasonality of grain prices but, if you’re playing the law of averages, now is not the time to be selling! That said, I have seen a few good old crop trades on our Combyne Marketplace these past few days, so if there’s something still in the bin, get it listed on Combyne and let the market come to you.

A wild week for grain, equity markets (and the world) – this week in the grain markets

Where’s your confidence? — This Week in the Grain Market