Grain markets ended the second week of trading in August mostly in the green, despite a bearish WASDE report from the USDA that suggested record national average yields for both corn and soybeans. Arguably, these yields have been priced in though, and the complex rallied on a devasting “derecho” windstorm in Iowa and some solid export sales. While we did get a bit of rally, we’re also at the time of the year when grain markets are usually at their lowest. Conversely, there is still plenty of solid demand in the market and on our Combyne Marketplace for the less liquid crops in pulses, small cereals, and specialty crops like flax.

Canola prices continue to pull back on ideas that this year’s crop in Western Canada is looking pretty large, but also the Canadian Loonie getting back up above 75.5 cents USD. Moreso, however, has been the sell-off of long positions held by speculators, taking their profits right before combines start to roll. Nonetheless, canola exports and domestic crush remains quite strong, which is why canola prices are staying elevated.

Switching gears, it’s estimated that as much as 10M acres of Iowa farmland (or about 43% of total acres) and millions of bushels of grain already in storage were damaged in Monday’s “derecho” storm that passed through Iowa. With the amount of photos and videos of the 100 MPH and higher winds coming across social media feeds, the storm certainly feels very bullish, but it comes just as this month’s WASDE report got released, whose data was collected weeks ago. Therein, there is a disconnect between what the market is trading and the data that the government releases.

Getting into the WASDE data, for soybeans, the USDA printed a national yield average of 53.3 bushels per acre, 2.1 bushels more than what the market was expecting to see, a jump of 3.5 bushels from the July WASDE, and nearly 6 bushels more than 2019/20’s average yield. It would also be a new record for average soybean yields in the U.S., led by new state records in Nebraska, Illinois, Indiana, and Ohio, and, in terms of total production, it would be the second-largest crop ever. 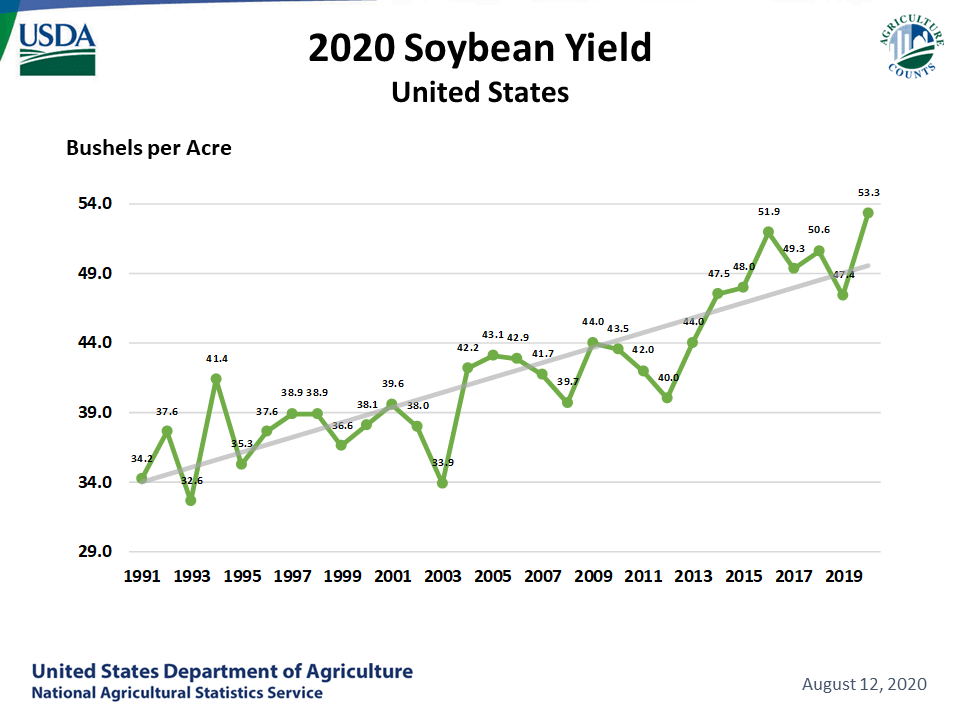 For corn, the trade was expecting to see a 180.5 bushels per acre national average yield print, but the USDA served up 1.3 bushels more at 181.8. If realized, that’s a 14.4 bushel increase year-over-year, or nearly 10% higher, but, more significantly, it’s a new national corn yield record for U.S. farmers, led by new records in outlier states like Michigan, Tennessee, and Kentucky, as well as some staple producers in Wisconsin, Minnesota, and South Dakota. This adds up to a total corn harvest of nearly 15.3 billion bushels and would be a new record, if realized, beating the 15.1 bbu mark set in 2016/17.

While this data appears quite bearish on paper, some acreage data from the FSA office actually helped corn and soybean prices rally. In their own report, the FSA noted that nearly 9M acres of U.S. farmland went into the “Prevent Plant” category this year, and while that’s peanuts compared to last year’s 19.3M acres, it is 3.5x more than the 2016-2018 three-year average! . Of note is that there are 12 states whose Prevent Plant area is at least double said three-year average, while North and South Dakota account for 42% of all U.S. Prevent Plant acres, with 2.57M and 1.24M acres, respectively!

On the demand side of things, U.S. corn exports in 2020/21 were raised by 75M bushels, as were soybean exports, as the bigger production means lower prices, which usually means more international buying. In that vein, 2020/21 corn feed and residual use was raised 75M bushels, but ethanol was unchanged. Added all up, this meant corn ending stocks came in lower than expected. For soybeans, the bigger crop meant a bigger carryout than what grain markets were anticipating. 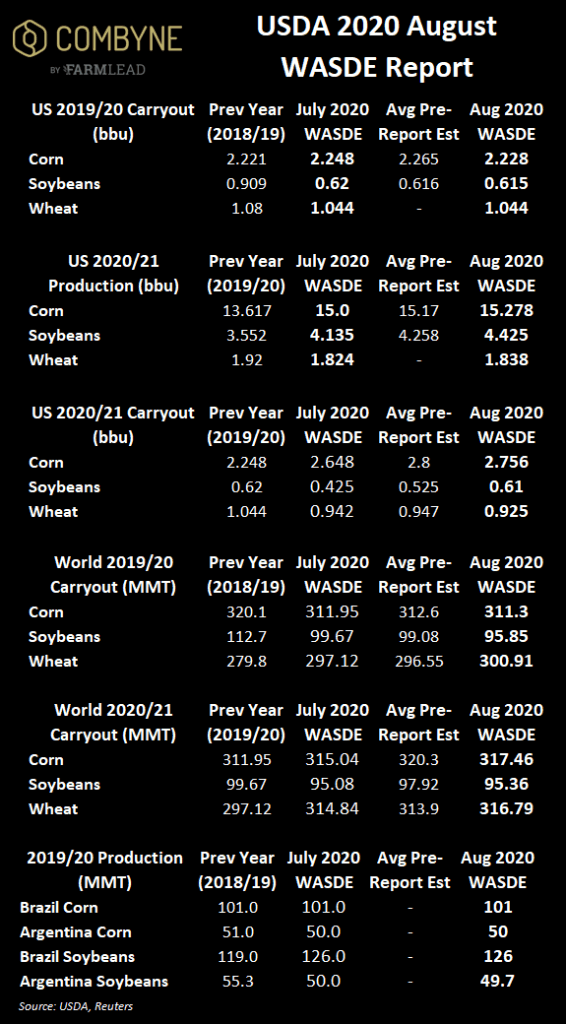 For the global wheat crop, the USDA said that ending stocks for 2020/21 will hit a new global record of 316.8 MMT. Keep in mind though that China still accounts for 51% of total global wheat inventories (and they don’t export anything!). Elsewhere, Australia and Canada’s wheat supply and demand tables were largely unchanged, but the USDA made downgrades in Argentina and the EU, but increased their forecast of the wheat harvest size in Russia and Ukraine.

Ukraine’s wheat harvest and exports were raised by 500,000 MT to 27 MMT and 18 MMT respectively, while Russia’s harvest and exports were bumped up by 1.5 MMT to 78 MMT and 37.5 MMT respectively. Conversely, the EU wheat harvest (including durum) was felled by 4 MMT to 135.5 MMT, while exports were lowered by 1.5 MMT to 25.5 MMT. The bigger surprise for me was that Argentina’s wheat harvest was not lowered by more than the 500,000 MT than what the USDA reduced it by, to now sit at 20.5 MMT. The Buenos Aires Grains Exchange noted this week, however, that the recently-planted Argentine wheat crop is being punished by dryness, with yield expectations falling “week after week”.

In the U.S., the wheat harvest was bigger than traders were expecting as the USDA said the U.S. durum and HRS wheat crops are looking pretty solid, at 62M and 577M respectively (or 1.687 MMT and 15.7 MMT if converting bushels into metric tonnes). But again, U.S. wheat exports were raised to help offset some of this increased production (check out how U.S. HRS and durum exports are faring below), but the increased exports was mainly attributed to the downgrades in Argentina and the E.U.. Ultimately, U.S. wheat ending stocks are now expected to sit at their lowest levels in 6 years! 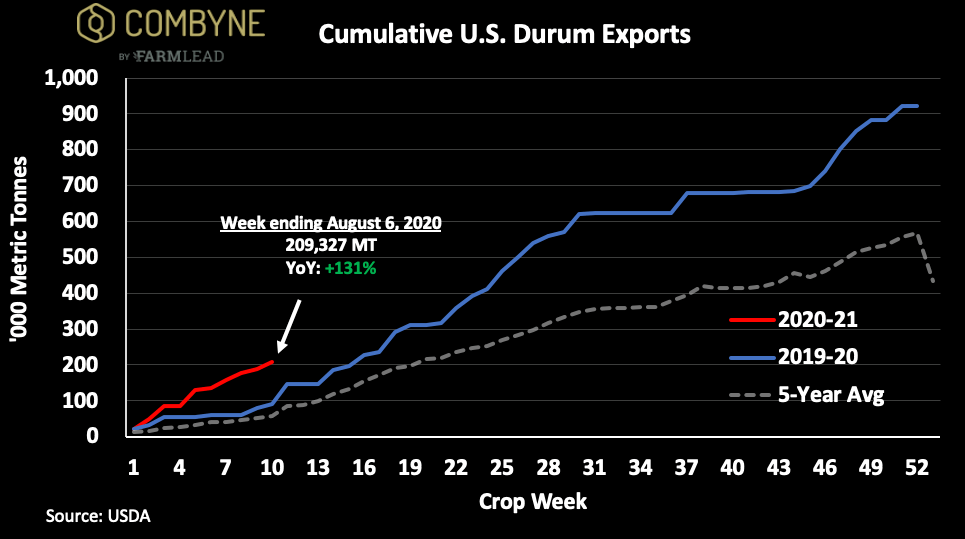 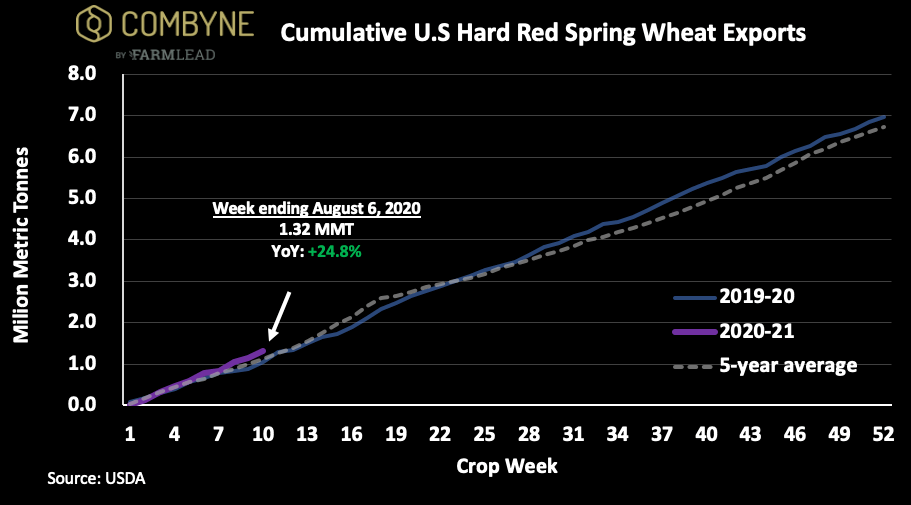 Overall, grain markets seemed to quickly move on from the USDA’s monthly supply and demand tables and to current factors: weather impacting supply and trade factors influencing demand. Thus, it’s very possible that, with this past week’s storms, U.S. corn and soybean yields will be lowered from their current record levels, but the likelihood of total production being a top 2 or 3 year is very likely.

Further, we have to remind ourselves that we’re still in COVID-19, which means reduced demand for everything from gasoline/ethanol to commercial food demand (which trickles back to less demand for meat, which means less grain demanded by the feed sector). Thus, I’d suggest worry about prices on the futures board right now, and instead, focus that time and energy on understanding breakeven sales levels and cashflow needs through the end of the year, not to mention getting equipment geared up for Harvest 2020!