Grain markets all struck green this week as some production concerns, combined with decent export activity helped spur the complex higher. With the crop year changing over to 2020/21 on Tuesday, September 1, corn and soybeans futures led the charge as yield potential is being challenged more and more (thanks Mother Nature!) Put another way, what looked like a record crop is now looking more like an average one, and thus, markets are reflecting that lower amount of supply by pushing grain prices higher.

Most talking heads agree though that we’re usually seeing a seasonal low in the market, not a significant rally. Accordingly, most also agree that this current rally is feeling a little overbought and that any bearish demand or weather headline could take the feet out from under said rally. This could certainly include rainfall in the Midwest, especially if Iowa gets some moisture, given the fact that about ¼ of the state is considered to be in a state of severe drought, with another 6.5% in an extreme state of drought. As evidence to heed my warning about the downside risk, here’s the 7-day precitipation forecast from the NOAA. 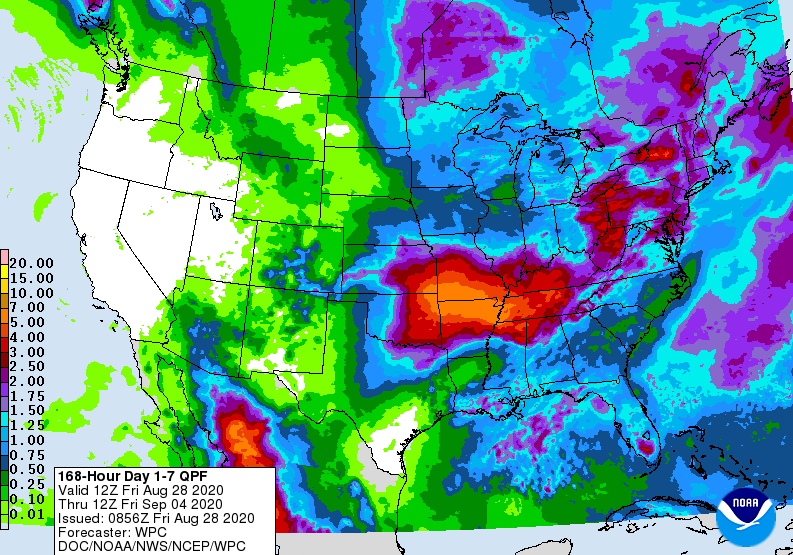 Those dry conditions aren’t just being seen in Iowa though as wheat markets gained on challenging production environments in both Europe and Argentina. For the latter, the wheat planting campaign was recently wrapped up but it was into some dry conditions. Compounding the situation is some frost events that were seen about 10 days ago. As a result, the Buenos Aires Grains Exchange believes that crop losses in the frost-affected areas could total 50% of what was expected to be taken off this year (or the potential equivalent of a couple million metric tonnes!).

In the E.U., ongoing dry conditions in the heart of the bloc pushed the European Commission to lower its estimate of the region’s common wheat crop by 3.1 MMT to 113.5 MMT. This also pushes their estimate of 2020/21 E.U. wheat exports by 1 MMT lower to 24 MMT. Most of the downgrade is being owned by France and Germany, with the former seeing a drop of 26% year-over-year to just 29.22 MMT (according to Agritel), while the German wheat harvest is expected to fall by more than 5% to 21.9 MMT, as per the DRV, the country’s farmer co-op.

Ultimately, the above two bullish factors (production reductions in Argentina and the EU) bodes well for North American wheat exports, and it comes at a time when there’s not a lot of competition on the rail especially in Canada! More specifically, fresh data out this past week showed us that just 43,000 barrels per day were moved via Canadian railroads in June. That’s the lowest monthly totals in over 8 years and a far cry from the record 412,000 bpd that was moving on Canadian tracks this past February. And yes, if you’re doing the math, Canadian crude oil shipments are basically tracking 10% of what they were before COVID-19 hit.

In this light, we saw Agriculture Canada this past week raise it’s 2019/20 full crop-year estimates of exports for grains and oilseeds. Included in this was durum and non-durum wheat, which saw jumps of 300,000 MT and 500,000 MT respectively to finish the crop year at 5.3 MMT and 18.7 MMT, respectively. Specifically, for durum exports, that 5.3 MMT handle is a new record for Canadian shipments, slightly surpassing the previous record of 5.178 MMT set in the 2014/15 crop year. Given some tighter supplies globally – especially in Europe, as durum yields in both Italy and Hungary are seen both nearly 7% below their average – AAFC is expecting 5.3 MMT of Canadian durum exports again in 2020/21! 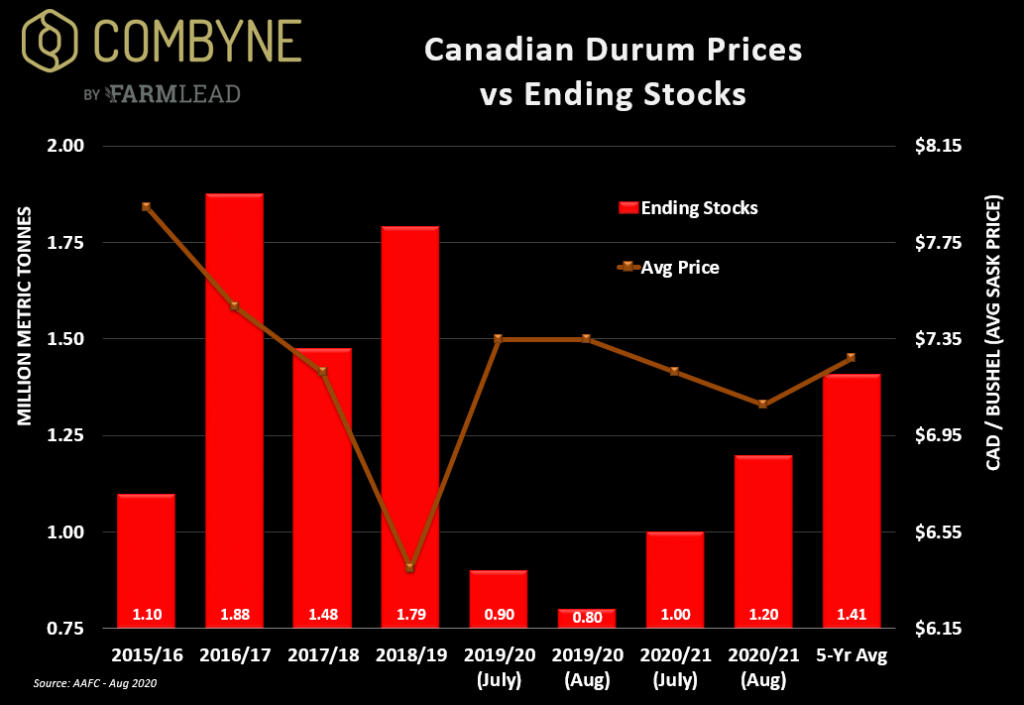 For the canola markets, AAFC confirmed the strong demand, both domestically and abroad, that many analysts have been talking about for the past few months. Further, this past week, StatsCan showed the total amount of canola going into Canadian crush facilities for 2019/20 was 10.13 MMT, a new record. While volumes in July were lower year-over-year by about 50,000 MT (or 5.5%), total year crush was up 9%.

In terms of exports, over a month ago, I timestamped a call that AAFC would have to significantly raise its estimate of Canadian canola exports, which in turn should support canola prices. In fact, AAFC pushed up their forecast of 2019/20 shipments by 524,000 MT to finish the crop year at 10.124 MMT. Combined with domestic crush volumes inching up, 2019/20 ending stocks are now pegged by AAFC at 1.825 MMT, a drop of 675,000 MT from their July forecast and the lowest we’ve seen since 2016/17. That said, the lower carryin from the old to new crop year suggests a similar drop month-over-month in AAFC’s forecast for 2020/21 canola ending stocks. 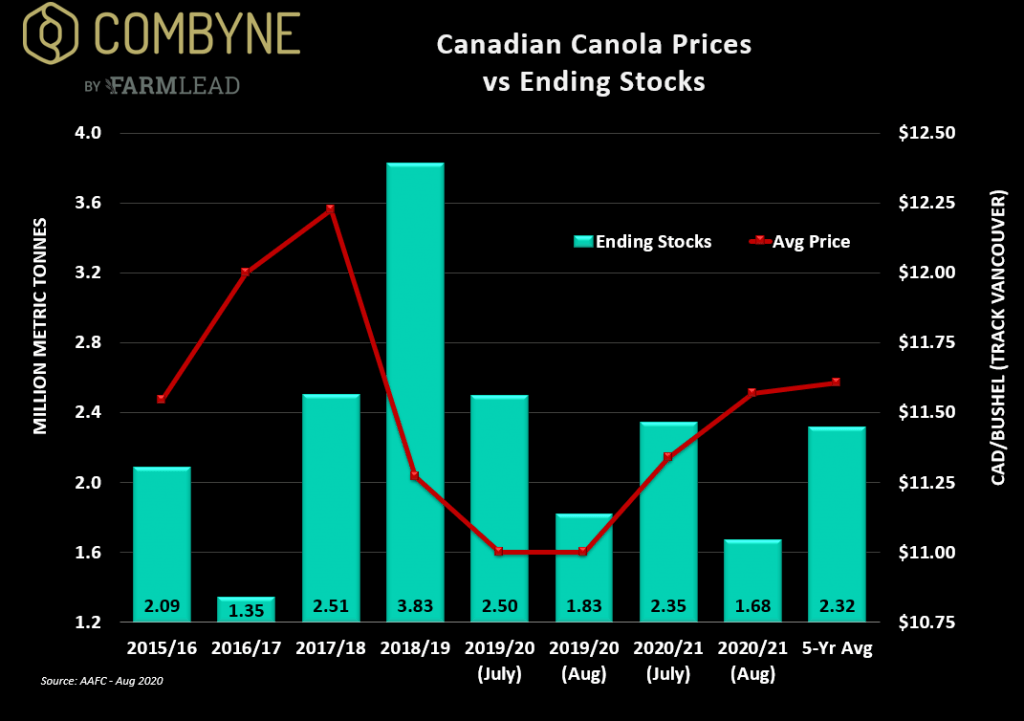 For context, AAFC had pegged canola carryout at 4.7 MMT way back in November and at the time, Viterra was even more bearish, suggesting ending stocks of somewhere between 6 and 7 MMT. To be fair, it’s tough to forecast a black swan event like COVID-19, which opened up the railroads and proved that if grain can be moved, it will. Nonetheless, I still felt it was incredulous to be that bearish, but even I, in my COVID-19 outlook for oilseeds in the beginning of May, thought canola ending stocks would come in closer to 3.5 MMT. Put bluntly, the pace of exports has been incredible.

Going forward, at 7:30AM CST on Monday, August 31st, we’ll get Statistic Canada’s first estimate of Harvest 2020 for the Canadian crop. Intuitively, that will likely change some of the numbers in Agriculture Canada’s balance sheet, but the positive demand stories shared by them this week is something we can anchor on.

Specific for canola though, because of some production issues related to labour for the southeast Asian palm oil crop, and this year’s smaller EU rapeseed crop, I believe that we’re now set up for an $11 CAD/bushel average cash price in the next 6 months! Don’t believe me? Look at the chart below to see what usually happens to canola prices over the fall and winter months! 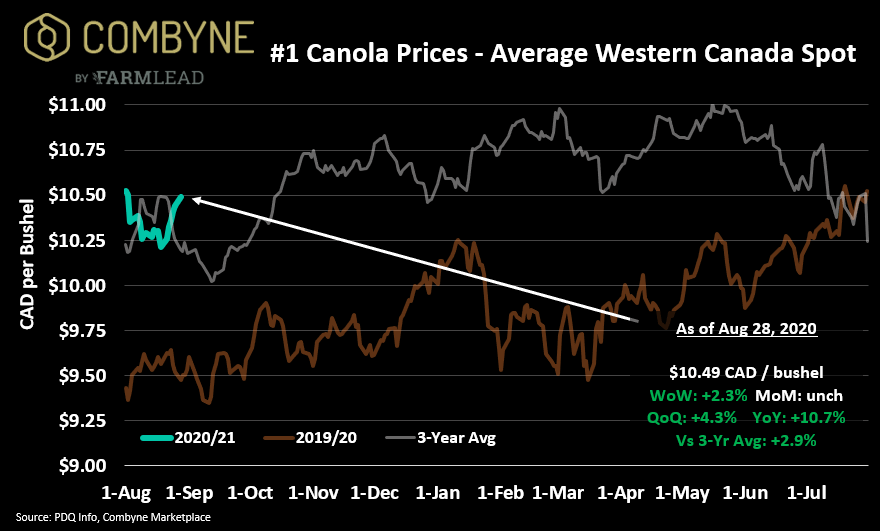 P.S. fingers crossed that we don’t, but if we see inclement weather in Western Canada this harvest like we have the last few, I’m not ruling out the possibility of $12 cash canola either. As a heads up though, I do expect canola prices to pull back over the next week as harvest activity starts to pick up.

Politics lure prices higher — this week in the grain markets