New data on farm cash receipts for the second quarter of 2020 sheds some light on the early impact the pandemic has had on farm income across the country and across different commodities.

Livestock receipts were down $629 million — nearly 10 per cent — from April through June of this year versus the same period in 2019, according to Statistics Canada’s second quarter farm cash receipts report, published last week. That decline was led by an 18 per cent drop in cattle receipts and a 14 per cent drop in farm income from hogs, coinciding with processing plant closures in Canada and the U.S.

While livestock payments to farms were down dramatically, overall farm cash receipts were actually up 5.2 per cent versus the same period in 2019, according to StatsCan.

Crop receipts from April to June rose by $1.3 billion or 14.4 per cent versus 2019, led by a $685 million or 152 per cent jump in gross revenues for dried cannabis following the legalization of cannabis-based edibles and beverages.

Among traditional crops, receipts for lentils skyrocketed by 208 per cent, while oat receipts were up 44 per cent, and canola payments were up 12 per cent. Soybeans and corn saw some of the largest declines in cash receipts among crops, down 12 per cent and 47 per cent, respectively. (see chart below for more.)

Payments from government risk management programs rose nearly 47 per cent in the second quarter, as higher insurance and AgriStability payments far exceeded a decline in AgriInvest payments to farmers.

Breaking down the gross revenue numbers provincially, Saskatchewan’s year-over-year increase in farm cash receipts was much larger than any other, rising 29 per cent thanks to strong receipts for the primary crops grown in the province. 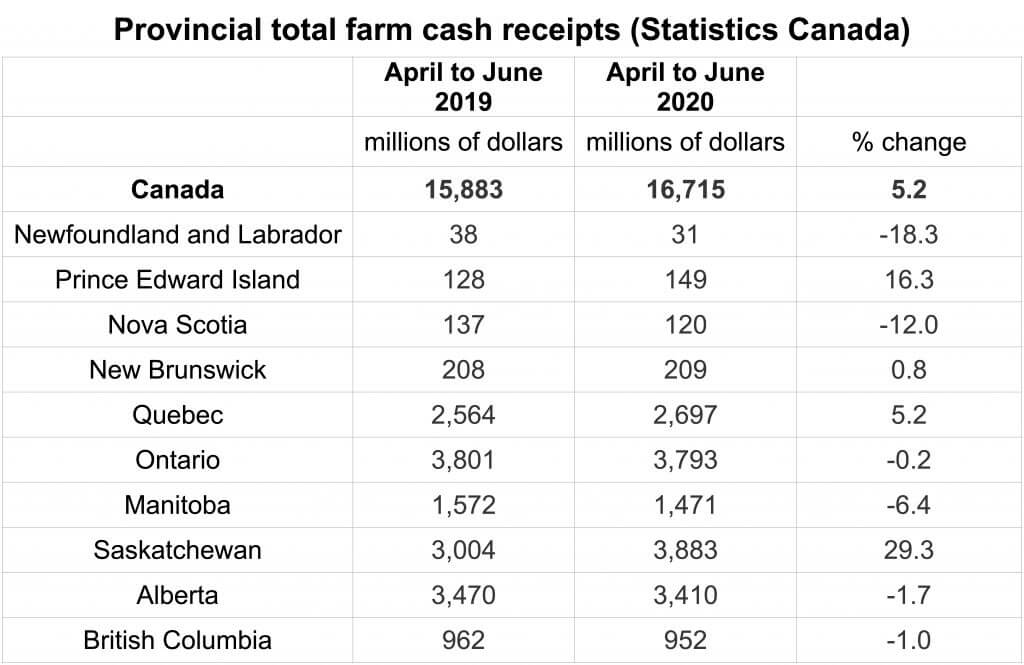 While the numbers reflect some of the early effects of the pandemic, it’s far from a complete picture. There are many other variables factoring into these numbers, including changes in market fundamentals and expectations from the spring of 2019 to 2020.

And it goes without saying that cash receipts are only one part of the farm profitability equation. The pandemic has also had a significant effect on costs in some farming sectors, including labour, personal protective equipment, and reduced efficiency from implementing distancing protocols.

You can take a deeper dive into the Statistics Canada farm cash receipts report and the related tables, here.

Dutch farmers protest recommendations that would decrease livestock numbers by 50%