Grain markets ended the month of July in the red, albeit, from a monthly performance standpoint, it wasn’t all bad news bears. Chicago wheat prices gained nearly 40 cents, or 8%, while canola and soybean prices both improved by about 2.5%. However, while corn prices lost about a quarter, or 7.5%, in the month of July, about 40% of said losses came in just this past week. Keep in mind here that we’re right smack dab in the middle of the growing season and so the declines this week feel more seasonal than anything else.

That being said, China did booked their largest one-day purchase of U.S. corn this past week, buying 1.937 MMT, or 175,000 MT more than the previous record that they set in another purchase just two weeks ago. They also bought 1.925 MMT of soybean exports, the largest one-week purchase since November 2016! The extra purchasing is certainly appreciated but will it continue? It seems that, with grain markets losing some footing this week, traders have their doubts that the buying will continue. With 5 weeks left in the U.S. corn and soybean crop years, actual sailings are down 16% and 4% respectively with 38 MMT of corn and 39.33 MMT of soybeans shipped out.

And we all should! It’s very clear that China has to buy A LOT of grain from the U.S. in the last 5 months of the year in order to meet their Phase One trade deal terms. Big headlines about record one-off purchases aren’t moving the needle for grain prices either, but, obviously if you’re China, with prices weakening, you’d likely be buying more. The question is: do they need to?

Well, they might, as there’s a very serious situation in central China with the massive Three Gorges Dam nearing its limit of what it can hold. More specifically though, the Yangtze River is flooding and the intensity of the water flow has damaged the structure of the massive Three Gorges Dam, and there’s concerns that the dam could fail. On this speculation, corn prices on the Dalian commodity exchange touched 5-year highs this past week, as the river basin downstream from the Three Gorges Dam accounts for nearly half – read: almost 50% – of all China’s agricultural output.

Frankly, if the dam fails, there’s a lot of economic and political implications – some are saying it would be China’s Chernobyl moment but that’s debatable. Politics aside, grain markets would likely see a healthy pop as China would have to import a lot more than it currently is, and not just corn or soybeans or wheat, but fruits, vegetables, meat, etc. Bottom line: this is like a fire burning right next to a stockpile of gunpowder and the only thing that’s staving off disaster is a few engineers and some concrete.

If it does fail, we have a lot of wheat and corn to go around, but the soybean balance sheet is a bit tighter than what we were thinking a few months ago. However, it looks like there’ll be lots of soybeans available from Brazil again in a few months, as estimates there are suggesting another record harvest. More specifically, a Reuters poll this past week has the average analyst thinking Brazilian farmers will producer 130 MMT of soybeans in their 2020/21 crop year, a 10 MMT or 8% bump year-over-year. Rubbing salt in the would is the fact that Brazilian farmers could make record profits – $3.45 USD/bushel as estimated by the IMEA – on their 2020/21 soybean harvest, as well as other crops because of the currency effects.

That said, the U.S. Dollar dipped this week to its lowest in nearly 2 years against a basket of other currencies. The combination of expansionary fiscal and monetary policy, as well the uncertainty of an upcoming Presidential election, troubling COVID-19 containment, and some very poor macroeconomic datapoints, it makes sense that the U.S. Dollar has weakened. The benefit is that it strengthens the purchasing power of international buyers who are buying in USD.

This currency effect can play both ways though. With the U.S. Dollar weakening, it strengthens the currency of others, such as the Euro, as mentioned, and the Canadian Loonie, which is now sitting at its highest level since before all this COVID-19 crap began in early March. Put another way, for those looking to buy from Europe or Canada, their costs have gone up over the last few months. There’s a rabbit hole I could go down here in explaining all the intricacies of currency effects, hedging, and other factors, but you and I both have an August Long Weekend to enjoy!

One of the best performances in grain markets this year has been durum prices, which are still tracking 15% better than they were at this time a year ago. While durum prices have dipped a bit in the past month, it’s hard to ignore the healthy uptick in demand during COVID-19, and that’s what’s keeping even new crop durum prices elevated as traders believe the demand could stick for awhile. For example, Nielsen reports that, in the 16 weeks preceding June 20th, pasta sales in the U.S. were up 54%.

Also supporting durum prices has been the drier weather in Europe (part of the reason for Strategie Grain’s wheat harvest decline mentioned at the beginning of today’s post). More specifically, Italy is going to have to import more, but so are North African countries like Morocco and Algeria after hot weather severely cut yield prospects. The International Grains Council, in their July update, estimates that global durum production will total 24.2 MMT, 6% below the five-year average, and 2020/21 ending stocks will come in at 7.7 MMT, down about 10% year-over-year and historically tight. Nonetheless, U.S. durum exports are exploding out of the gate to start its 2020/21 crop year, while Canadian durum exports are likely to set a new record, eclipsing the 5.177 MMT mark set in 2014/15. 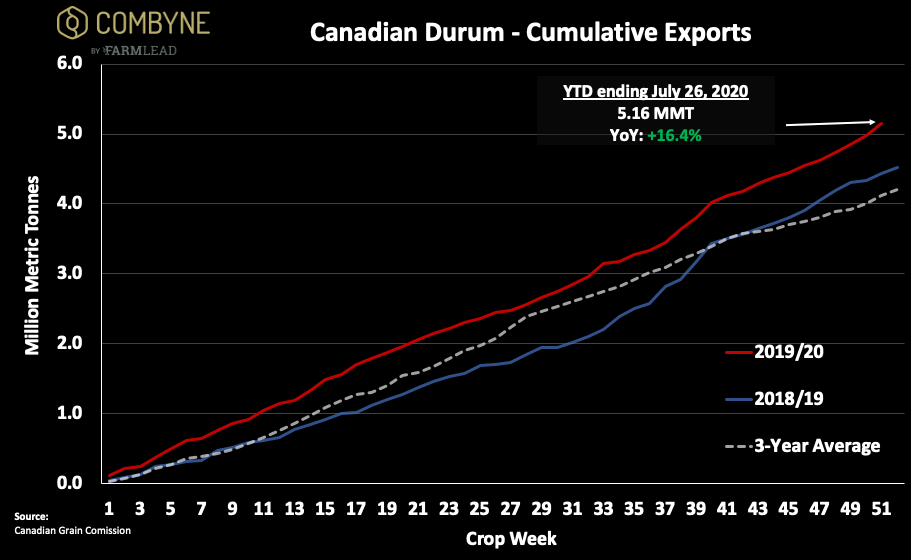 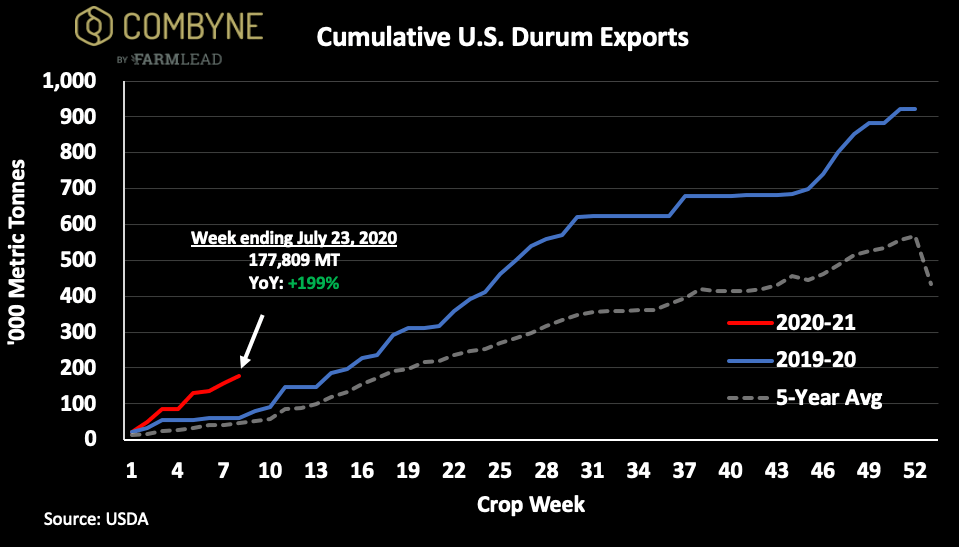 Going forward, while there’s still a few weeks left before the majority of durum fields start to get cut, current new crop prices are reflecting a decent-size crop in Canada, but a smaller one in the U.S. and elsewhere. Put another way, Canadian durum prices will be closely watched this year by traders around the world, given its importance to supply said world markets with a food staple that a lot more people want in these COVID-19 days. To be clear, I’m not saying that durum prices should explode to the upside here, but the usual seasonal strength that shows up in late October could come a bit earlier this year. 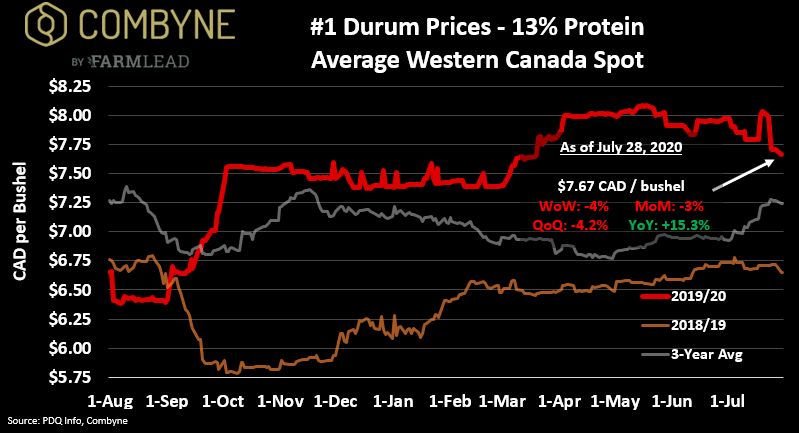 Overall, as we flip the calendar into August and support our malt barley farmers this long weekend, we’re on the final stretch of the 2020 growing season here in North America. There are certainly some dry spots (NW Iowa and southern parts of Western Canada) and some wet spots (looking at you guys battling through things north of Edmonton), but for the most part, grain markets are moving lower because of the time of year. That said, it’ll take a few weeks for these harvest lows to form, but there are some VERY good options being traded on the Combyne Marketplace for old crop, so if you need to empty out a bin, get your grain Listed!

Have a great long weekend! 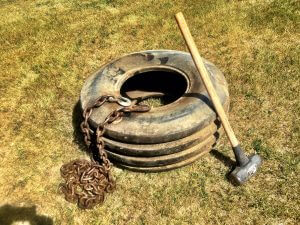 Tough Inclinations — This Week in the Grain Markets