Grain markets were able to rebound in the 3rd week of August as crop tour results and some technical buying help moved the complex higher. While we’ll dig into the ProFarmer crop tour results in a bit, corn and soybean prices weakened towards the end of the week on both farmer and technical selling, as well as some moisture events coming up from the U.S. Gulf of Mexico. Wheat was the big winner of the week though, as the export optimism continues to climb for winter wheat, which in turn has helped HRS wheat prices in Minneapolis.

This week, grain markets were largely consumed by the ProFarmer crop tour, the annual 4-day event that takes crop scouts from Ohio, through the Corn Belt, before ending in Minneapolis. The tour was fairly relevant this year as it came directly after the major derecho wind storm that hit Iowa the week prior. Put another way, having unbiased boots on the ground to help survey and clarify the damage was important. However, as scouts went through the paces, they recognized that drought conditions in parts of Iowa are likely to have a bigger impact on corn yield potential than the derecho storm did.

Nonetheless, the combination of the two Mother Nature-driven events will result in Iowa average corn yields will drop about 5 bushels year-over-year to 177.8, and 6 bushels below the three-year average. On the flipside, soybeans in Iowa are faring a bit better from both the drought and the wind storm than corn stalks have, and thus, yield potential is looking more promising. Accordingly, Iowa soybean yields were suggested by the crop tour scouts to be just slightly higher than both last year and the five-year average.

That said, most eyes are on whether China will continue to buy American or not. Some policy changes are buzzing in China that suggest the government there will be pushing farmers to plant more corn as the country looks to become self-sufficient in the coarse grain again. As the world’s second-largest corn producer the holder of 2/3s of the world’s inventories, one has to wonder why they’re choosing this direction?

The answer lies in the fact that a lot of those stocks are useless, being a number of years old, and videos of some of the old, mouldy, foreign-material-infested corn showed up on social media this week! Unsurprisingly, in true communist censorship form, Beijing moved to ban all photo-taking devices from its storage facilities! Perhaps the damage was done though as domestic corn prices in China pushed to new five-year highs this week.

With the hog herd being rebuilt in China, state-buying grain agencies have been purchasing more feedstuffs, including 1.654 MMT of new crop soybeans according to yesterday’s USDA exports report. While not a lot of corn was bought by them this past week, many expect China to use up its full 7.2 MMT tariff-rate quota for the first time since it joined the WTO back in 2001. That said, the lack of consistency in buying has kept grain markets skeptical of China’s true intentions. In that vein, U.S. corn and soybean exports continue to track behind both last year’s pace & that of the seasonal average. 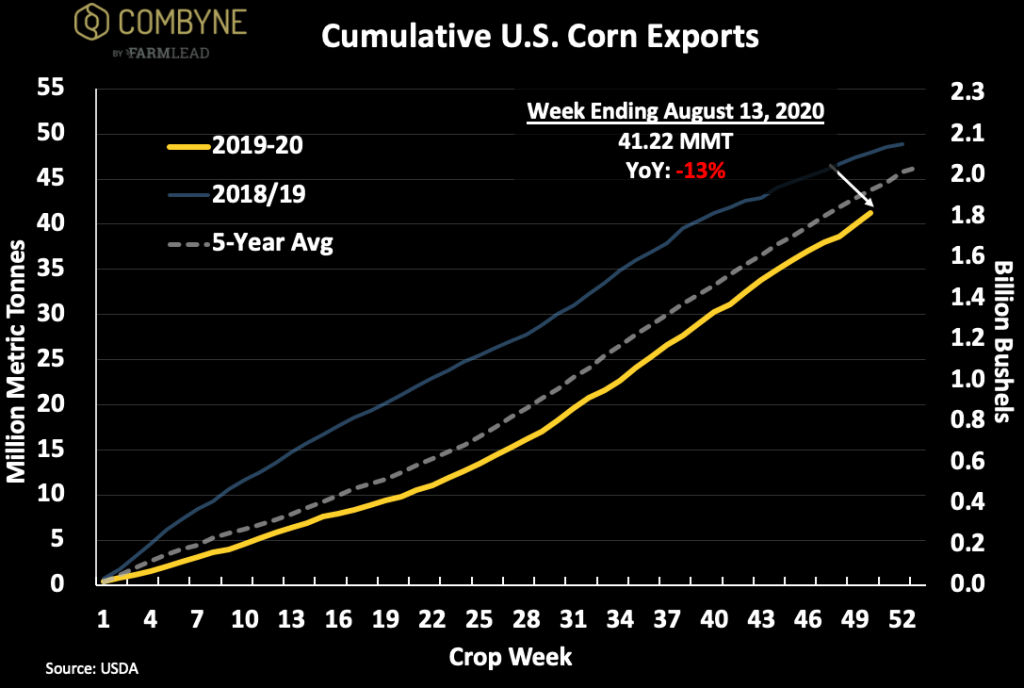 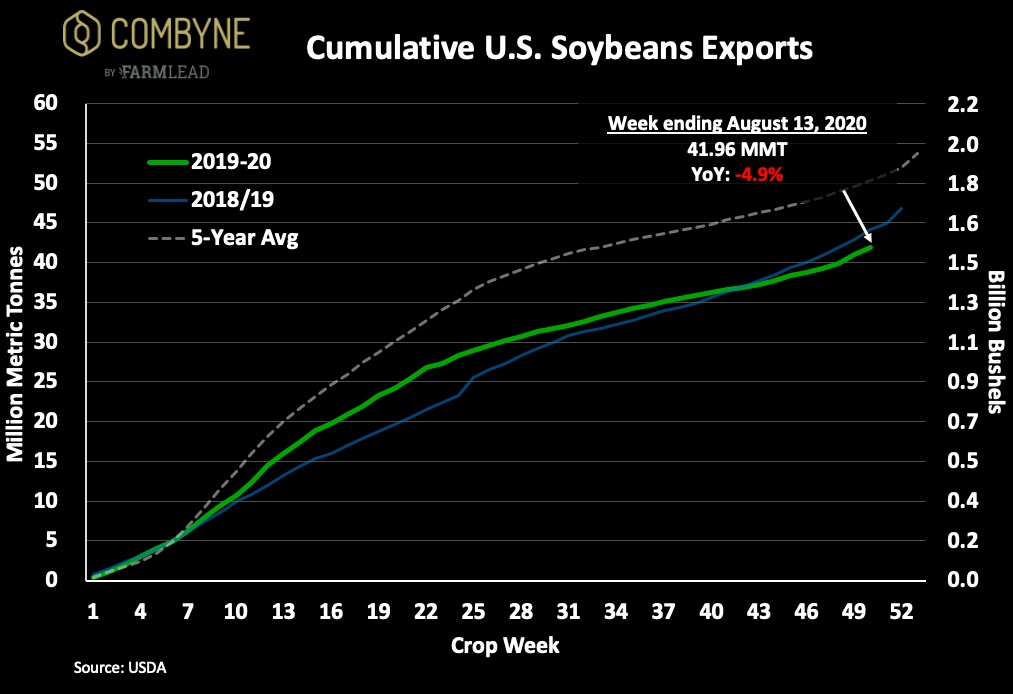 On the flipside, we know that China has cancelled its plan for an ethanol mandate by the end of 2020, limiting some export potential for U.S. corn. But, let’s be honest, there’s not nearly as much gasoline demand as their used to be, and so, unsurprisingly, it’s likely we’re going to see the USDA lower their demand estimate for corn going into ethanol processing (they left it at 4.85B bushels for 2019/20 and 5.2 billion bushels for 2020/21 last week in the August WASDE report).

Perhaps the USDA is waiting to hear what’s going to happen in Brazil before the update their numbers. More specifically, Brazil has a tax-free ethanol import quota of 750M litres which is set to expire on August 31st. In the past year, the entire quota was used up by U.S.-originated ethanol shipments, and now, the White House is asking for not only a renewal of the tariff-free quota, but also eliminating the 20% tariff on any ethanol shipments to Brazil above that 750M-litre volume.

Coming back to North America, what all this ethanol and crop tour talk adds up to is that there appears to be healthy amount of corn supply and less demand from the ethanol sector and abroad, thus, more corn to go into other sectors, such as livestock. This will intuitively weigh on feed grain prices, and given the appreciating Canadian Loonie against the U.S. Dollar (which touched a 7-month high this week), we could see more corn coming into Canada. 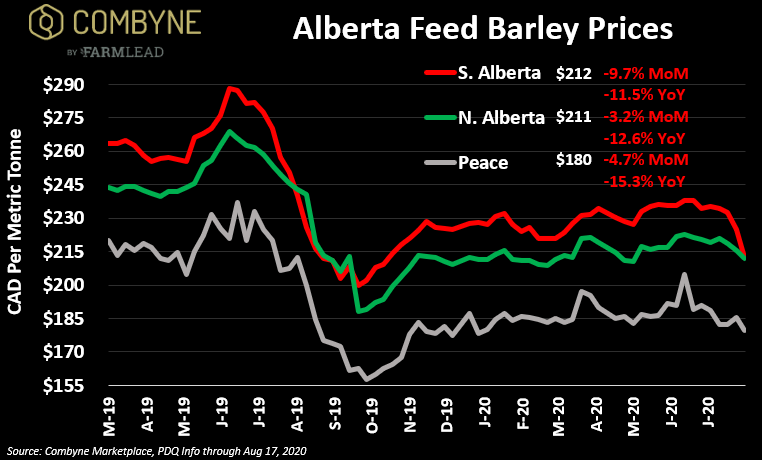 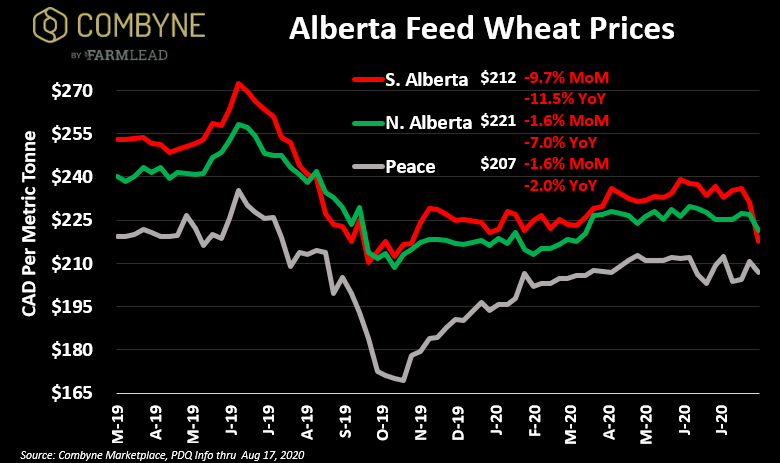 Nonetheless, we’re at the time of year when harvest is rolling and we’re getting a better idea of yields (which are looking pretty good, mind you), so feed grain prices are dropping a bit. While the hot temperatures in the Canadian Prairies have resulted in more than one combine overheating and catching on fire, the market is looking at the overall picture of harvest progress, and again, things are moving along nicely, albeit a bit behind their seasonal average for this time of year.

If you’re looking to clear some bin space before your crops start coming in, there are lots of credit-verified buyers actively looking for FOB farm deals so get yours listed on the Combyne Marketplace and let the market come to you! Further, we have just shared a major update to the Combyne notifications engine, and you can now fully customize all Combyne Marketplace notifications, including what days of the week you receive them, and even what time of day! 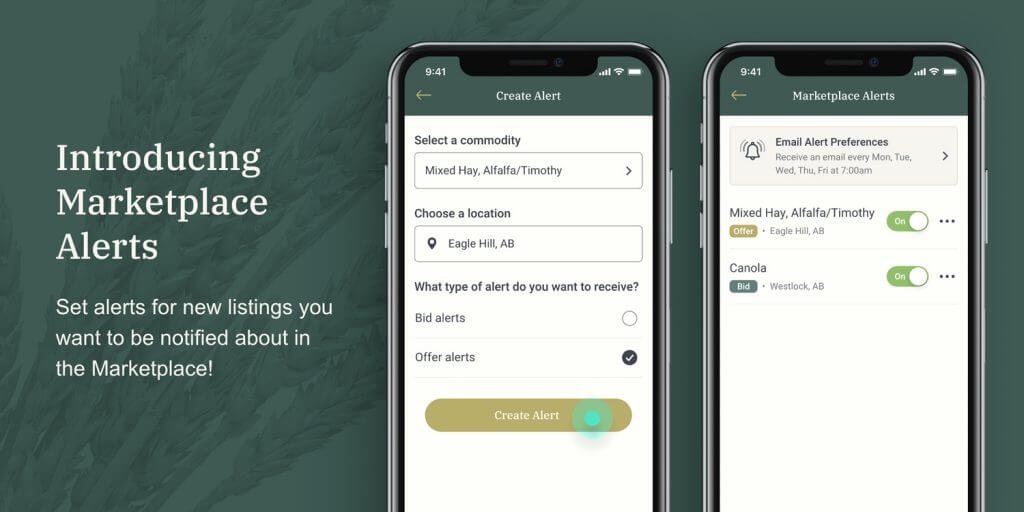