The USDA boosted its yield estimates for corn and soybeans in its August World Agricultural Supply and Demand Estimates (WASDE).

While the report was generally thought of as bearish, both corn and soybean futures ended the trading day on Wednesday higher.

The way the market responded today, holding above the previous $3.20 low on the December chart, is good news, says Matthew Pot of Grain Perspectives, noting a month ago in early July the market believed that yields would be below trendline for the year.

Overall, USDA is forecasting total production of 15.3 billion bushels for corn, which is up 278 million from its July projection. Keep in mind, these numbers were compiled before the storms that tore through the mid-west in the past couple of days.

As far as soybeans go, the USDA’s first survey-based soybean yield estimate comes in at 53.3 bushels, also up from July’s 49.8 bushels an acre. Pot notes that ending stocks are reported at 610 million bushels for new crop, compared to 425 million in July, putting it above the trade estimate of 523 million bushels.

For wheat, U.S. ending stocks are down slightly to 925 million bushels from the previous estimate of 942 million — the lowest they’ve been since 2014-15, as the average U.S. yield increased from 49.7 bushels to 50.1 bushels an acre. Global wheat ending stocks remain at record levels, however, as the USDA raised its estimate by 2 million metric tonnes to 316.8 million. 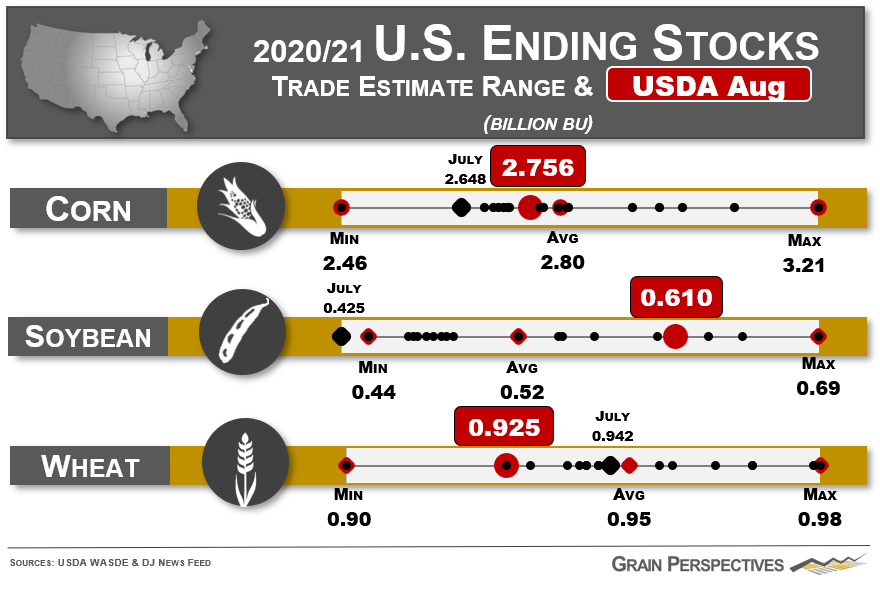 Syngenta Canada says it will not have its lambda-cyhalothrin-containing insectide, Matador, available to western Canadian farmers for 2023, but is working to have it back on shelves for 2024. Matador is approved for use on a variety of crops, including potatoes and canola, however a label revision from 2021 comes into force in 2023, removing…