It’s official, we’re likely entering the twilight zone for grain markets. This week, we moved through the middle of September and grain futures are sitting at multi-year highs, yet it’s the time of year when we usually are seeing seasonal lows. The rally that we’ve seen since July has gone beyond just fundamental supply and demand factors, and moreso into speculation. This past week though, what exacerbated the buying is the plenty of bullish headlines that cheap money could trade on.

On Wednesday, the U.S. Federal Reserve shared their intentions to keep interest rates near 0% for at least 3 more years AKA until 2023! This means that companies can borrow money at practically no cost from the government, then, on margin, leverage it significantly in their trading activities. Put another way, the current monetary policy of the U.S. Federal Reserve is only going to augment the divide between haves and have nots in America, which I fear could just spur further unrest.

But I digress, and would prefer to have you focus your attention back on more speculators and market commentators piling into the grain futures game, which again, fueled with said cheap money, is helping push grain prices higher. But that’s also a contrarian indicator for me, being somewhat analogous to the famous 1929 stock market crash story from Joe Kennedy – JFK’s father – who sold all of his positions when a shoe-shine boy started giving him investment advice.

The takeaway here is that both institutional and retail investors helped push up the stock market, and we are likely starting to see some of that spill over into commodities. This presents some downside risk, something that I’m extremely cognizant of, given the time of year: how are corn, soybean, and canola prices are making fresh multi-year highs at harvest time? Specifically, I told Shaun on RealAg Radio this week that, for canola, “the downside risk is very real! In fact, this week on the Combyne Marketplace, we saw a ton of canola in central Alberta trade at $12 CAD/bushel. From a futures perspective, the rally in soybeans has been literally twice as impressive as canola’s, as the tables below attest to.

The multi-billion-dollar question though is how much of this current rally is driven by fundamentals versus speculators? Remember that there is a lot of ultra-cheap money to access from the Federal Reserve and all that additional capital has to be allocated somewhere! In fact, hedge funds are estimated to now be in their longest position ever for soybeans. Based on buying activity on Friday, this managed money is also likely the longest they’ve been in corn and wheat since 2012, which, if you recall was when the Midwest experienced a drought.

That said, this move higher has certainly been supported by some bullish headlines, notably the consistent pace of buying of U.S. grain exports by China and the continued concern of the yield impact from August’s dryness. In fact, some analysts are suggesting some validity to the supply concerns, pointing to tightening basis levels for corn and soybeans throughout the Midwest.

On the demand side, we’ve had 10 straight days now of the USDA announcing new soybean export sales to China. This certainly plays well to the reality that soybean prices have climbed in 17 of the last 19 sessions, and have had sixth straight weeks of positive gains. However, I’m cognizant of how quickly China could start buying more Brazilian soybean exports in the late fall/early winter. Put in simpler terms, the seasonal increase we usually see in Nov/Dec/Jan may not be as strong as China slows it’s buying U.S. soybean exports and instead opts for boats of Brazilian soybean exports.

On that note, both U.S. soybean and Canadian canola exports are performing very well in the first few weeks of the marketing year. Just 2 weeks into the 2020/21 campaign, U.S. soybean exports so far are double what they were a year ago, with 2.26 MMT already sailed (or a little more than 83M bushels if converting metric tonnes into bushels), but this largely because of some big boatloads moved last week. For Canadian canola, shipments through Week 6 are up by one third, with nearly 1.2 MMT already sailed! 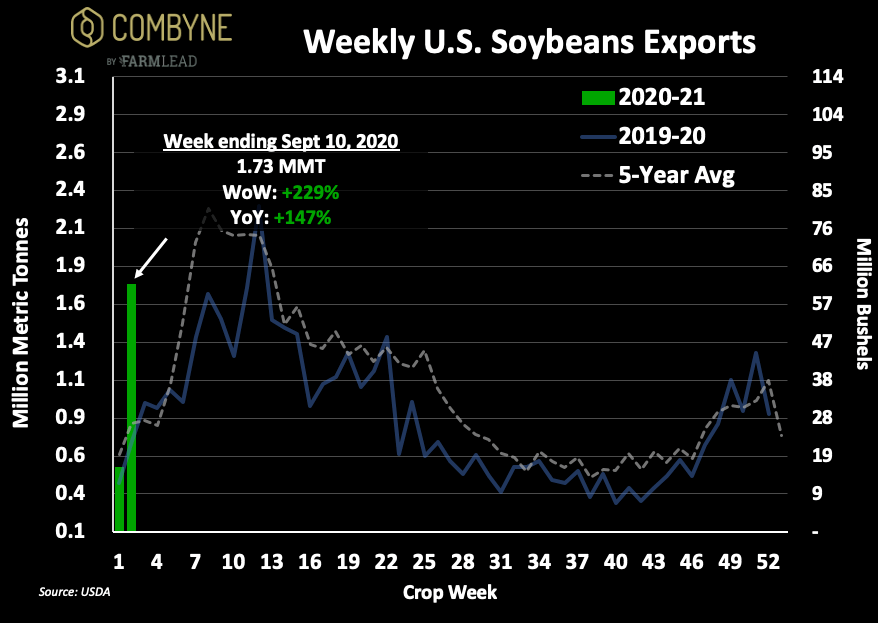 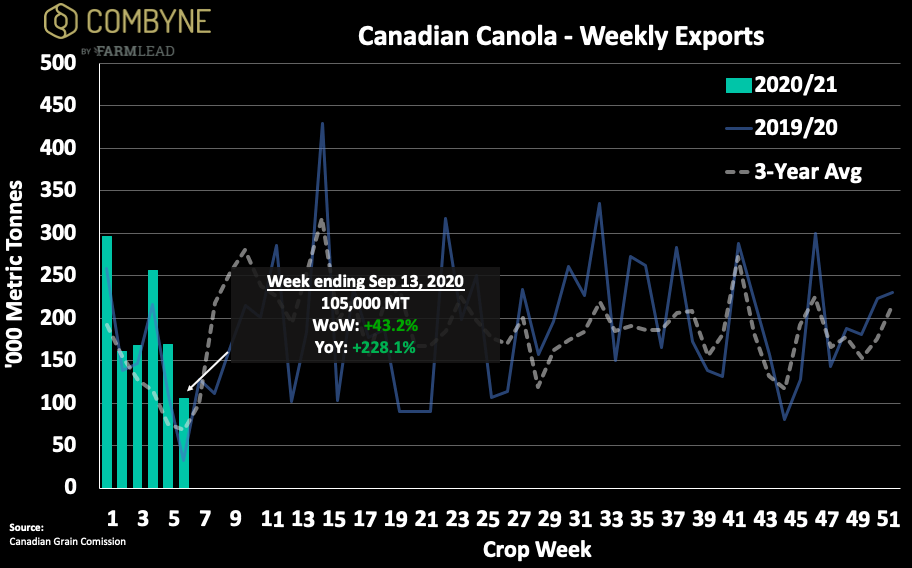 One of the catalysts for wheat prices this week was an updated production report from StatsCan, which saw both spring wheat and durum output falling by nearly 800,000 MT each to 25.2 MMT and 6.13 MMT, respectively. Also contributing was new reports out of Argentina’s Buenos Aires Grain Exchange that yields in northern growing regions could be just 50% of their average, due to persistent dry conditions. Finally, cooler weather over the long-term U.S. forecast suggest some sort of production impact, and thus pushes values higher. 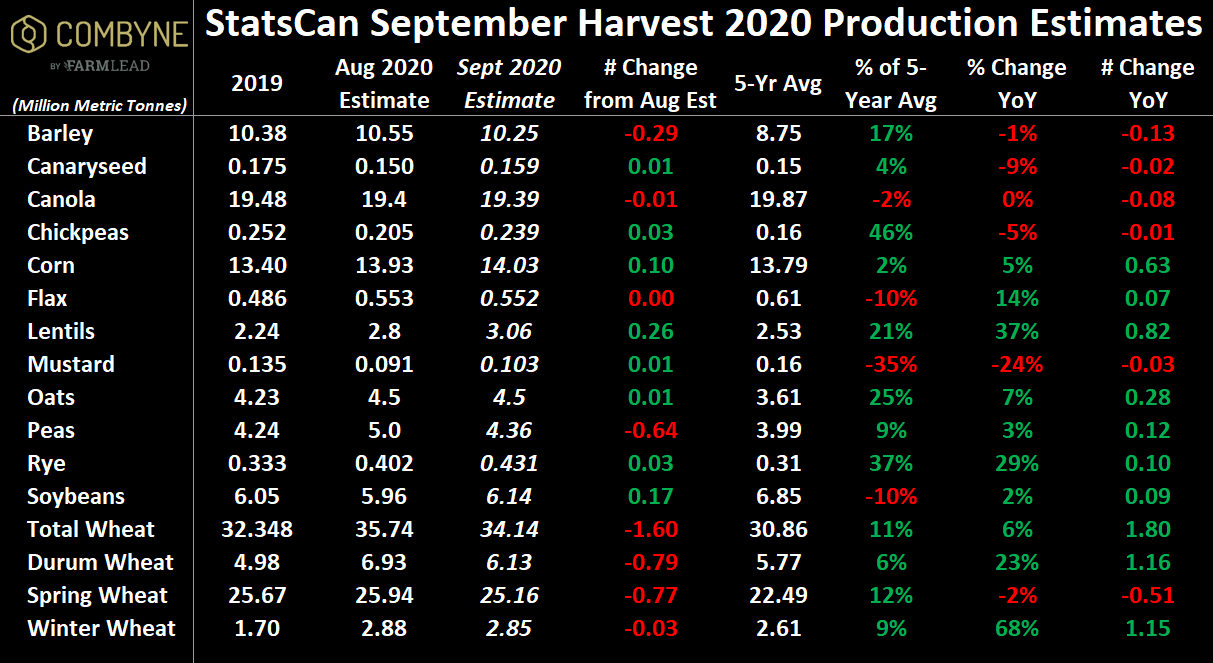 In other crops, Statistics Canada increased the Canadian lentil harvest by about 260,000 MT to now sit at 3.06 MMT, which is still the largest crop since 2016/17’s 3.2 MMT haul. As I mentioned a few weeks ago, lentil prices have been trending sideways but bids are creeping lower as quantity and quality of Harvest 2020 becomes more apparent. Comparably, Statistics Canada lowered the pea harvest by 640,000 MT to 4.36 MMT, which kills any idea of a new record harvest, but, like lentils, it is the largest crop since 2016/17. This somewhat offset the USDA’s estimate last Friday of the American pea harvest of nearly 844,000 MT, which was about 100,000 larger than what the market was expecting.

On the bullish side of things for pulses, India’s monsoon season is ending on a strong note, with heavy rains forecasted across most of key western and central agricultural production regions through the end of September. As most of our readers now, any quality issues with India’s pulses harvest might lead to more imports. To our nice surprise, the Indian government lowered their import tariff on lentils back down to 11%, after just 2.5 weeks at 33%. For peas, China continues to be a big buyer of Canadian peas, accounting for most of their more than 1 MMT shipped in so far in the 2020 calendar year.

Overall, there are certainly some bullish supply AND demand fundamentals that are supporting the rise in grain markets, but this ride on the futures board must stop some time. And once it stops, it might stutter for a day or two, but there’ll be some bearish headlines that accelerate the sell-off. Historically, this sort of build ups is unwound in a matter of a week so selling into this current strength is not a bad thing. That said, there is still the demand fundamentals (for now) to fall back on and so the pull-back may not be as hard as usual (but it will still be a pullback!).

P.S. Have you looked at current prices for new crop 2021? Might want to.