Average farmland values in Canada crept up an average of 3.7 per cent in the term ending June, 2020, led by growth in Alberta, B.C. and New Brunswick, according to the most recent Farm Credit Canada (FCC) farmland values report.

This increase is in line with mid-year results over the past five years, which showed single-digit increases for the full year, says FCC.

“Given the global economic situation during the first half of 2020, Canada’s farmland market is showing remarkable resilience in the face of adversity and uncertain times,” says J.P. Gervais, FCC’s chief agricultural economist. “Changes to production and marketing plans induced by the (COVID-19) pandemic have had a definite influence on profitability, yet the demand for farmland remained robust.”

Ontario land values were nearly stagnant for the first six months of 2020, and Quebec’s growth came in at 2.6 per cent.

Low interest rates, the limited supply of farmland in the market, and confidence among producers in the farmland market appear to be the main drivers behind the 2020 mid-year increase, FCC says. 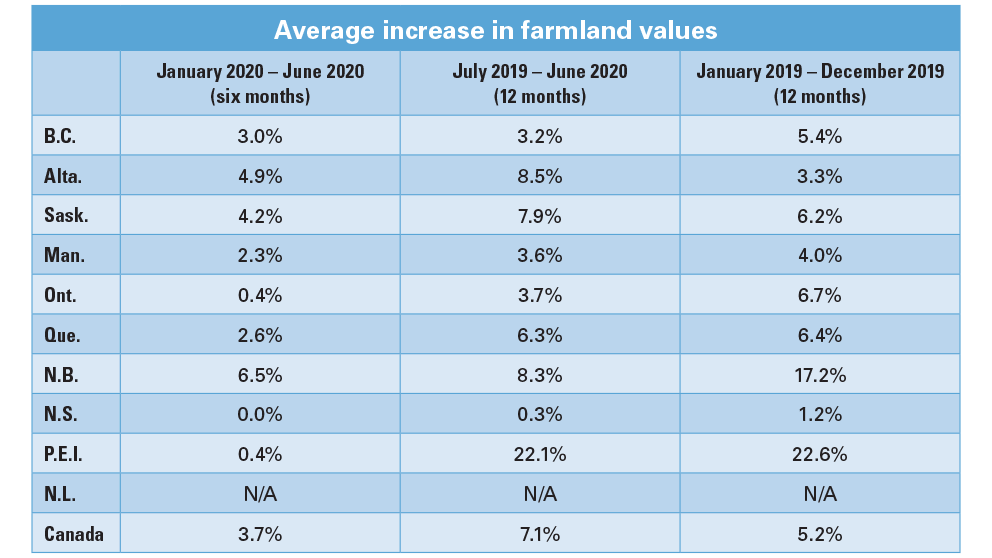 In general, the pace of farmland value increases over the past six months was slightly higher in western provinces and slightly lower in central and eastern parts of the country, with the exception being New Brunswick, according to the report.

“Despite supply chain disruptions that have impacted some sectors, such as red meat, the pandemic has so far not significantly affected the agriculture land market,” Gervais said. “In fact, the grain, oilseed, and pulse sectors have performed well in the first half of 2020, supporting the slightly higher rate of increase in western Canada.”

Who is G3 and What are Their Plans for the CWB?

A Capital Partnership: How to Keep the Peace While Managing Farm Assets