Grain markets continued their unusual upward trend to start the month of September as, despite some weather concerns and harvest progressing, the bulls are holding fast for the complex. Futures markets continue to be buoyed by some strong new crop export sales and said supply concerns, all of which helped soybean prices climb to new two-year highs ahead of the September long weekend.

While next week, on Friday, September 11th, we’ll get the next monthly WASDE report from the USDA, it was Statistics Canada that had a spotlight on this week, sharing its first production estimate for Harvest 2020, as well as its grain stocks report through July 31st (or the end of the crop marketing year for all Canadian crops except corn and soybeans). In the latter report, total wheat stocks dropped noticeably to 5 MMT (-15% year-over-year), but that was mainly due to durum stocks falling 63% from last year to just 660,000 MT.

Elsewhere, barley inventories climbed 11% to 956,500 MT while oats were up over 7% to 425,600 MT, largely due to higher commercial stocks after a solid Harvest 2019. Of note though is that feed barley use of 6.9 MMT for 2019/20 was up 30% year-over-year and the largest volume in a decade! Canola stocks also declined significantly, down by over one-third to 2.7 MMT as strong farmer selling, record domestic crush demand, and strong export activity to close out the 2019/20 campaign. This is part of my rationale for $11/bushel canola is suddenly appearing and why $12 is even possible later this fall.

For the pulses, strong exports to finish the crop year off were a large contributing factor as to why pea stocks fell 25% to 234,100 MT and lentils inventories dropped over 90% to just 61,000 MT. That said, earlier in the week, StatsCan says that there’s plenty of pulses coming back into the market with Harvest 2020, namely a record pea crop and the 2nd-largest lentils output ever in Canada. Also adding bearish headwinds for lentils is India’s import tariff going back to 33% after a 3-month break down at 11%. Accordingly, many analysts, including yours truly think there could be some pressure on lentil prices, which is why I recommend this week to get some sales on the books if you hadn’t done any forward contracting. 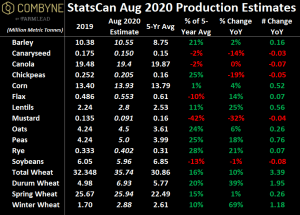 Also of note in the production estimates is the size of the durum and winter wheat crops, with the former getting the most attention, given some production concerns abroad this year. With that in mind, Agriculture Canada is forecasting a repeat in 2020/21 of the 2019/20 durum export campaign, in which 5.3 MMT were sailed.  hat’s largely a function of robust demand, and some slightly smaller supplies out of Europe. For the former, Italy, Morocco, and Turkey (surprisingly) have been big customers in 2019/20, while 2020/21 durum yields in Europe are down about 6%, namely because of 19% drop in French yields.

Staying in Europe, an updated estimate from German Ag Ministry suggests that their wheat harvest will total a little under 22 MMT, or about a 5% drop from last year’s haul. Despite the smaller German wheat harvest, British millers are buying more from Germany since the UK’s own wheat harvest is expected to fall 35% year-over-year to just 10.5 MMT. This is largely due to the fact that wheat acres planted last fall turned out to be the smallest in nearly 50 years, mainly thanks to the wet fall of 2019.

UK millers have also bought more Canadian wheat, as they seek higher-protein levels to blend off with lower protein wheat coming in from the domestic UK wheat harvest. That said, it’s very likely that UK wheat imports will quickly surpass the 1.05 MMT brought in during their 2019/20 crop (which runs from July to June). That said, we’re 4 weeks into the 2020/21 shipping campaign and non-durum wheat exports are already cruising with nearly 1.8 MMT sailed. That is nearly 150% better than the first 4 weeks of the 2019/20 campaign! Worth also noting is the strong start to 2020/21 for canola exports, with nearly 900,000 MT sailed, good for a 16% improvement compared to the first 4 weeks of 2019! 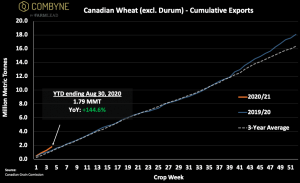 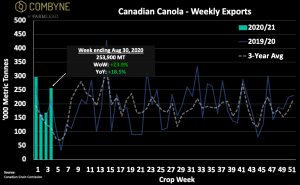 Staying in wheat though, the strong exports pace is largely attributed to the aforementioned smaller wheat harvest in Europe, but also the small haul in Ukraine, who’s own wheat exports are tracking slightly behind last year with just 5 MMT sailed in 2 months so far. That said, wheat prices have been climbing globally for the past few weeks alongside the rally seen here in North America, and as the saying goes, high prices cure high prices, Asian wheat millers’ demand has slowed at these elevated levels.

Ahead of next week’s WASDE, corn prices in Brazil continue to sit at record high levels and they’re not going to drop any time soon according to a few analyst. With the second crop, safrhina corn harvest finishing up in Brazil, there’s a fresh wave of supplies hitting the market, but the large majority of this production was forward contracted and so those are being filled for mainly the corn exports market. The main reason that corn prices continue to rise is the slow farming selling on the spot market to ethanol and livestock players, since they tend to buy a bit more hand-to-mouth.

That said, with corn prices climbing in Brazil, it’s making it tougher for the livestock industry to afford said feed supplies. Industry experts in Brazil believe that corn exports out of Brazil won’t slow down either, since exporters usually pass on the additional cost to their international buyer. In this vein, that’s why Brazil will see more than 41 MMT of corn in the 2019/20 crop year, and somewhere between 31.5 – 34.5 MMT of corn exports in 2020/21 (Note: the Brazilian corn crop year runs from February to January). That said, if Brazilian farmers repeat the same sales process in 2020/21 that they did in 2019/20, a lot of bushels will be forward contracted again and that should weigh on global corn prices a bit this winter.

One thing to consider for Brazil, however, is that weather agencies around the world have increased their expectations of La Nina event happening this fall and continuing through the winter. As this would fall in the heart of the South American growing season, it’s important to use history as a benchmark and the last time a La Nina event happened in 2011/12, soybean and corn production in Argentina and Brazil both saw significant challenges. Further, the La Nina event carried through to 2012, and brought drought conditions to the U.S. (and $8 corn prices on the Chicago futures board!)

While we’re unlikely to see that sort of price this year, private yield and production estimates for the U.S. corn and soybean crop continue to fall. Allendale’s nationwide farmer survey pegged corn and soybean yields at 178.3 and 51.9 bpa respectively. This would add up to just under 15 billion bushels of corn and a little more than 4.3 billion bushels of soybeans (or 380.8 MMT and 117.3 MMT, respectively, if converting bushels into metric tonnes). Similarly, Informa/IHS Markit lowered its corn yield estimate to 178.1 bpa and soybean yield to 52.1 bpa.

While these new yield and total production numbers are below what the USDA suggested in their August WASDE, we’ll likely see something similar in next Friday’s WASDE. That said, traders will also be watching for corn and soybean exports as China continues to buy at a healthy pace, given their dealing with a supposed 30 MMT shortfall this year. Ultimately, those in the bullish corn exports camp are expecting China to buy somewhere between 15 and 20 MMT of U.S. corn exports in 2020/21, but with a lot of things related to China for me these days, actions speak louder than words.

Have a great Labour Day Weekend, and even though there are no CFL games, Go Riders!

Oat Acres Under Pressure From Collapse in Futures