Grain markets continued to push higher, led by corn and soybean prices, as a friendly September WASDE report continue to bring more bulls to the table. Going into the report, the complex was focusing on demand line items and supply updates after a tough August of weather, and while the latter was recognized a bit, the USDA did leave the door open for more demand increases down the road. Accordingly, soybean prices continue to reach new two-year highs, including briefly climbing above $10 USD/bushel on the futures board before settling just below it.

Before digging further into the September WASDE report, grain markets were continuing their trend higher, thanks to reports of strong export sales and the cooler temperatures, including a few nights of frost across the Canadian Prairies and U.S. Northern Plains. This has continued to support canola prices, helping more analysts join my timestamped call from a few weeks ago that cash canola prices are now more likely to get closer to $12 CAD/bushel, than unlikely. Wheat prices were the unfortunate bearish scapegoat this week as global production and ending stocks continued to climb on the backs of bigger harvests in Canada, Australia, and even the EU. For Australia’s wheat harvest estimate of 28 MMT from the USDA, this nearly matched ABARES’ updated estimate from earlier this week that suggested the crop will nearly double year-over-year. The EU’s harvest was increased by 650,000 MT to 136.15 MMT, while Argentina’s was felled by 1 MMT to 19.5 MMT but I expect that to fall further. Finally, the USDA basically matched the first StatCan estimate, raising the Canadian total wheat harvest to 36 MMT (largely a function of the bigger durum crop in the Prairies!) 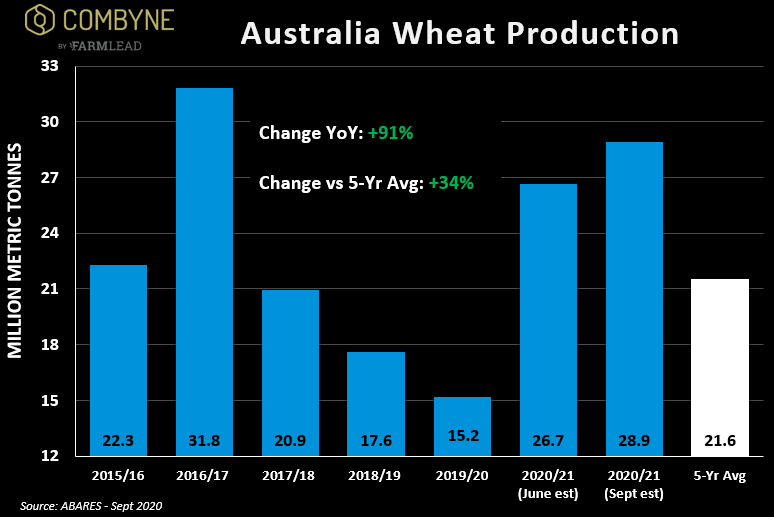 Moving over to the bread and butter of the WASDE, corn and soybean yields were lowered by the USDA to 3.3 and 1.4 bushels per acre to 178.5 and 51.9 bpa respectively. These were both slightly above pre-report expectations, but a lot of attention was paid to the 550,000 less harvested acres of corn. Worth mentioning within the NASS micro data suggests corn ears per acre are better than last year, but not as much as the 2018 record. Comparably, U.S. average soybean yields is identical to 2016, but pod counts are lower.
While the USDA admits that they didn’t account for the dry weather and/or the impact of this past week’s frosts, many traders took that wording as an indication that production numbers will fall further in subsequent WASDE reports. This, combined with ideas of stronger demand through the end of 2020 is largely the reasons behind the positive price performance on Friday for corn and soybeans. 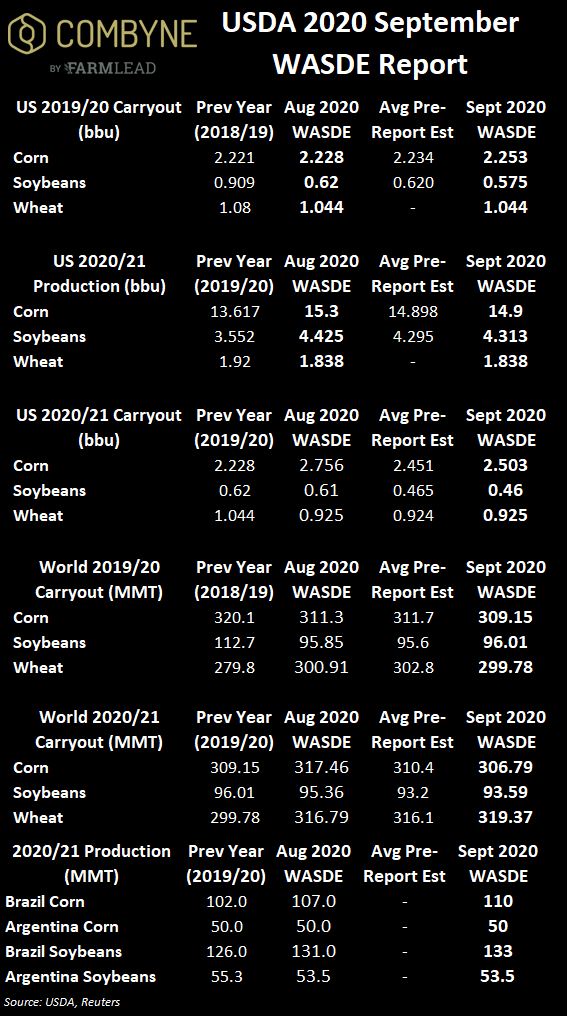 Bigger crop expectations out of South America didn’t hang over the market though, as more traders are cognizant of the impact on production south of the equator that a La Nina event can have (there’s a 75% chance of it happening this winter, according to the Climate Prediction Center). This is arguably bullish since ending stocks in Brazil are tight enough that they’re going to have to import soybeans, corn, and rice this year! The reason behind the extreme tight carryover is because of the strong domestic and international demand that Brazil’s received this year, notably from China as it relates to China. Nevertheless, the USDA kept their estimate of Chinese soybean imports at 99 MMT. That said, total soybean imports by China in the 2020 calendar year are up 15% year-over-year with 64.7 MMT imported thus far, but August’s imports did fall 5% from July as the pace of cargoes coming in from Brazil slowed.

However, through this week’s USDA export sales report, China’s new crop soybean purchases from America to date are good for an all-time high for this time of year. For corn, the USDA kept China’s import estimate at 7 MMT, despite flooding and typhoon damage to crops across the country. Thus, many believe that China’s corn imports number is going to go higher; 11 MMT seems to be consensus but the most bullish analysts think China’s corn imports number could finish as high as 25 MMT, due to the current low global prices, relative to the current near-record level of domestic corn prices in China. Inherently, there’s lots of buzz that this increase in Chinese demand for American corn could more than offset the drop in corn-for-ethanol demand, another line item that will be watched closely in today’s WASDE report. Worth also mentioning is how Chinese wheat farmers aren’t selling to the government as they have willingly in the past, as they think wheat prices are going to rise, given the corn supply concerns. Overall, grain markets continue to inch higher on the ideas of stronger demand narratives, albeit I continue to be cognizant of downside risk here as more of Harvest 2020 gets completed. In this vein, grain markets have pushed higher and if we don’t see ongoing headlines to support the bullish narrative, a short-term pullback seems imminent. Of course, no one likes to be the one trying to catch a falling knife, which intuitively means that you should look to be selling into this strength. Put a different way, with grain prices this strong at harvest time, unusual patterns requires one to adapt to the environment, and making a 10% – 15% sale in spring wheat, durum canola, lentils, and even oats is a smart risk management play.