The number of soybean acres in Western Canada has declined to less than half of what it was when acreage peaked in 2017 — dropping every year since then — but there are expectations that acres have likely hit a floor in 2020.

In this follow-up episode to our last Soybean School on soybean maturity ratings, Dennis Lange, Manitoba Agriculture’s pulse specialist, discusses what he’s seeing for trends with soybean production on the Prairies.

Much of the decline in acres can be linked to lower yields due to a lack of late season precipitation — in 2016, Manitoba’s average yield was 42 bushels per acre, and last year, it was 27 bushels per acre. 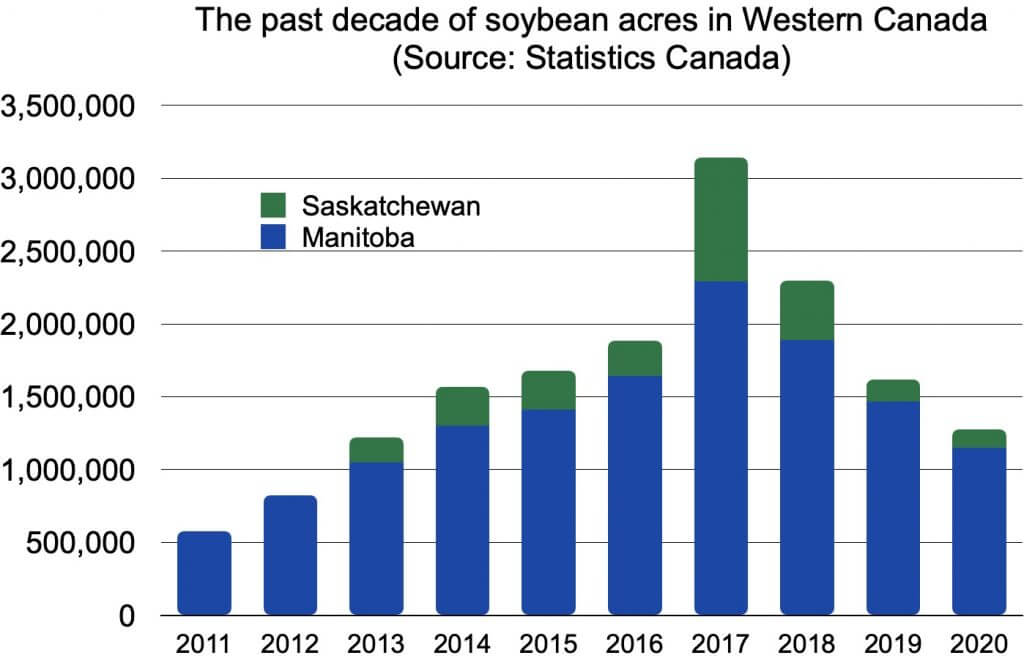 Recent frost has likely hurt the crop in some areas where fields were still in the R6.5 stage, but timely rains this year have raised hopes of improved yields.

With the potential for higher yields, and growers looking for options in their rotations, Lange expects a slight increase in Manitoba’s acres next year — possibly in the 1.3 to 1.4 million range.

“In the end, things will balance themselves out, so I think we’ll see more acres of soybeans next year,” says Lange.

Several issues that can negatively affect yield have also followed as soybeans expanded north and west.

“When we first started growing soybeans, it was a Cinderella crop,” he notes. “You basically put it in the ground, sprayed it twice and walked away from it until harvest time. Now we’re dealing with a few other issues — weed resistance issues, poor stands, and possibly SCN (soybean cyst nematode) moving in. That’s just normal for a crop when you have more acres of it. You always need to pay attention to what’s happening out there.”

Watch/listen to the full episode on the future of soybeans on the prairies.

Wheat School: Seed the crop based on kernel weight, not bushels

What’s the Connection Between Flowering Length and Canola Yield?

Canola acreage has shot up over the past couple of years and with the price right now it can be one of the most profitable crops on the farm. The research that goes into canola is phenomenal and has allowed yield averages to soar in the last few years. But there are still some myths…