Grain markets pulled back this past week, something that many market participants, including yours truly, were expecting to see. Corn prices fell as harvest 2020 speeds up and the market is starting to consider the impact to ethanol demand, should a second wave of COVID-19 rage across the world this fall/winter. From a headline standpoint, corn’s weekly losses were their largest since April and soybeans haven’t fallen this much in one week since March! Conversely, the U.S. Dollar earned its best one-week gain since April, which put further pressure on the complex as U.S. grain becomes less for international buyers, relative to other options.

While canola and soybean prices both dropped considerably this week, the vegetable oils balance sheet remains relatively tight, given the demand for edible oils and feedstocks. Therein, the fundamental for the likes of canola and soybeans look pretty solid over the next few years, but one bullish factor I’m watching more closely is the crush volumes and available exportable supplies out of South America. More specifically, soybean crush volumes in Argentina in 2020 are expected fall 10% from last year to 38 MMT. Meanwhile, despite a record 2019 harvest, Brazil is literally importing soybeans, with total estimates suggesting 850,000 MT, or the most since 2003.

For canola, the pull-back was clearly noticeable this week, and it surely stings for those who still have some green seeds in their swaths still (my family included!). Apart from some rain this week in a few spots across the Canadian Prairies, it’s looking like the next few weeks could be dry (given the last few years though, I’m probably not the only one keeping my fingers crossed!).

What certainly won’t help the canola complex though is Agriculture Canada’s updated supply and demand tables, as the government found an extra 830,000 MT from Harvest 2019, and increased their Harvest 2020 number by 400,000 MT to match Statistics Canada’s estimate from a few weeks ago. While demand was also upgraded a bit, the bigger crop from 2019 means more that gets carried into the 2020/21 new crop year, and thus ending stocks head higher. Needless to say, the $11.50 – $12/bushel cash canola we saw trade a lot this past week on the Combyne platform, is likely gone for awhile, unless the speculative buying helps re-start this recent rally (but I have my suspicions that traders have moved on). 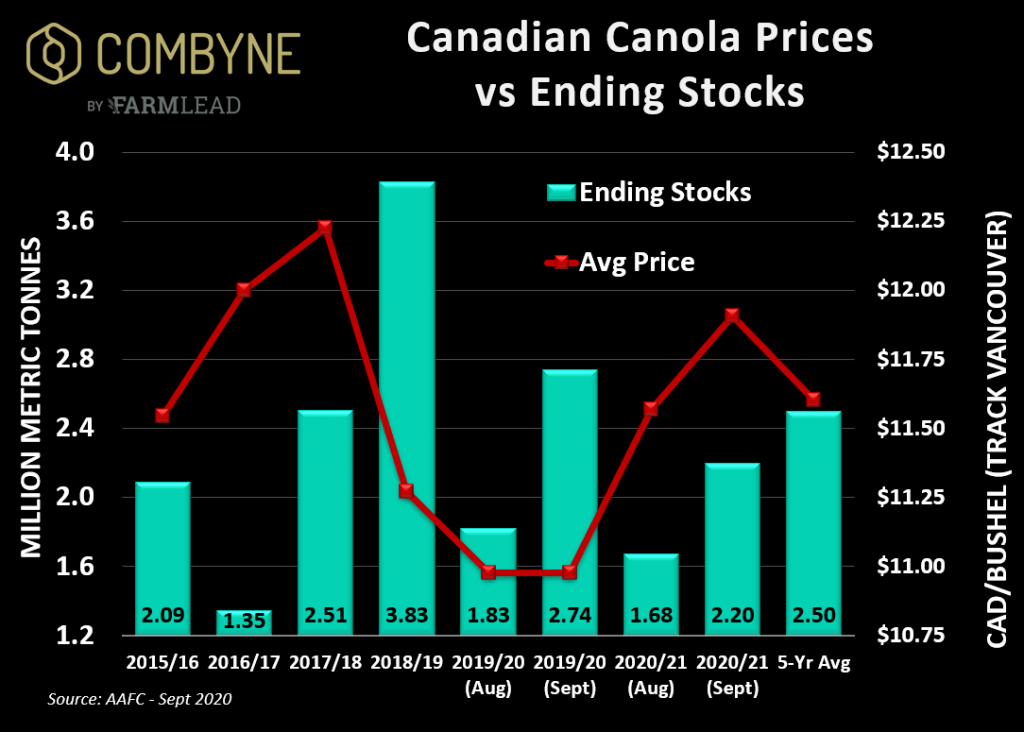 Also in Agriculture Canada’s updated tables was stronger demand for oats and barley, both domestically and abroad. As a result, ending stocks for the two cereals with both lowered materially for 2020/21 to now sit at 700,000 MT for oats and 1.1 MMT for barley. This past week, in the FarmLead Breakfast Brief, I estimated that oats stocks for 2020/21 could come down 100,000 – 200,000 MT, so I was pleasantly surprised when Agriculture Canada dropped it by 300,000 MT. In this light, it re-confirms my comments from earlier in the week that oats prices could perform better than barley this year.

While we know China is looking to buy more barley from anyone not named Australia, this should bode well for Canadian barley exports, which are already tracking nearly 4x higher than what they were doing a year ago! That said, this strong pace of international demand isn’t exactly being matched on the domestic side. however, feed barley prices continue to inch higher (up about 4% week-over-week this past week) as harvest is onto the back half of being complete. 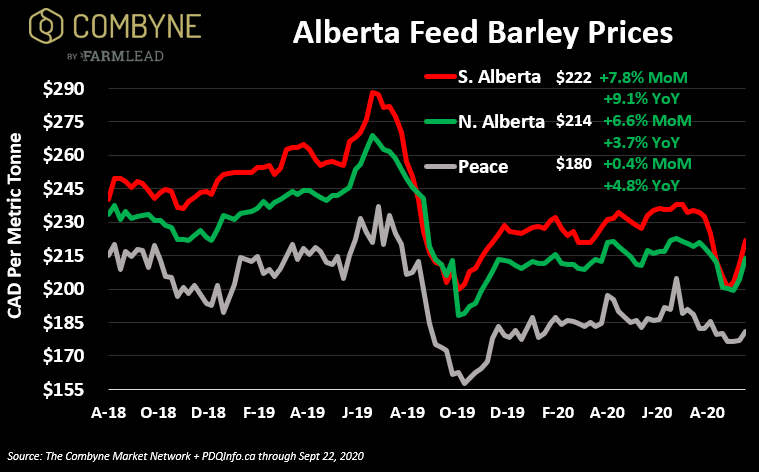 For domestic oats prices, so far we’ve seen levels stay relatively strong, compared to seasonal lows during previous harvest times. Supporting the current floor for oats prices is the reality that, in many places, yields aren’t really living up to the expectations that were had a month ago, albeit quality is still good. Year-over-year, Statistics Canada is estimating the Canadian oats harvest to be about 7% larger, whereas barley output is just 1% below last year’s haul. Potentially impacting Canadian oats exports, however, is a larger U.S. harvest, pegged at 942,000 MT, or a 22% bump over last year’s 771,000 MT output.

Overall, I’m not expecting oats prices to hit last year’s levels, but I do think we could inch up from where we’re currently at, as it’s something that’s historically seen over the winter months. That said, here are some decent pricing options for deferred delivery and locking in oats prices at a profit should never be considered a bad thing! The main takeaway here, however, is that oats demand is likely to be stronger than barley in 2020/21, as it’s a food staple (i.e. oatmeal) and the COVID-19-related drop in commercial demand isn’t a stark as that for malt barley demand, something I wrote about back in June. However, I do think that feed barley prices will remain relatively strong, but like oats prices, not as strong as last year.

Looking into the wheat market, strong demand here at home AND abroad continues to support durum prices at the current levels. With the slight downgrade to the size of the crop in StatsCan’s second production estimate, durum ending stocks were lowered by 500,000 MT to now sit at 700,000 MT. For perspective, the last time we saw a carryout this tight was technically 2019/20 (thanks to AAFC lowering 2019/20 stocks to 660,000 MT), but other than that, never. Put simply, thanks to the record exports seen in 2019/20 and expected to continue in 2020/21, durum inventories are a long ways from the nearly 2 MMT we saw just a few years ago. 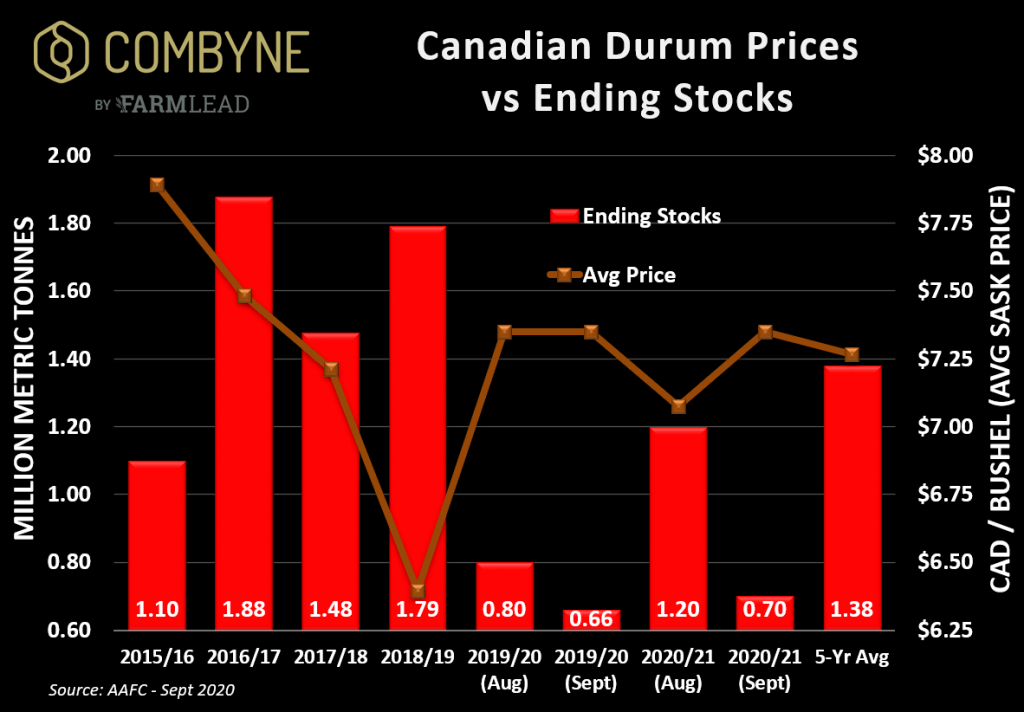 For non-durum wheat, Canadian exports continue to perform well, tracking 130% better year-over-year with 2.84 MMT sailed through Week 7. Looking abroad though, the market is looking at Ukraine and Argentina, where persistent drought weighs on the production potential. It was estimated this past week by the Ukrainian government that only 10% – 15% of Ukraine’s fields had enough soil moisture to be planted! That said, some rains are in the forecast for the next few days, which should get more farmers into the field to plant their winter wheat, but without it, Ukraine could be in for a second straight year of smaller wheat production.